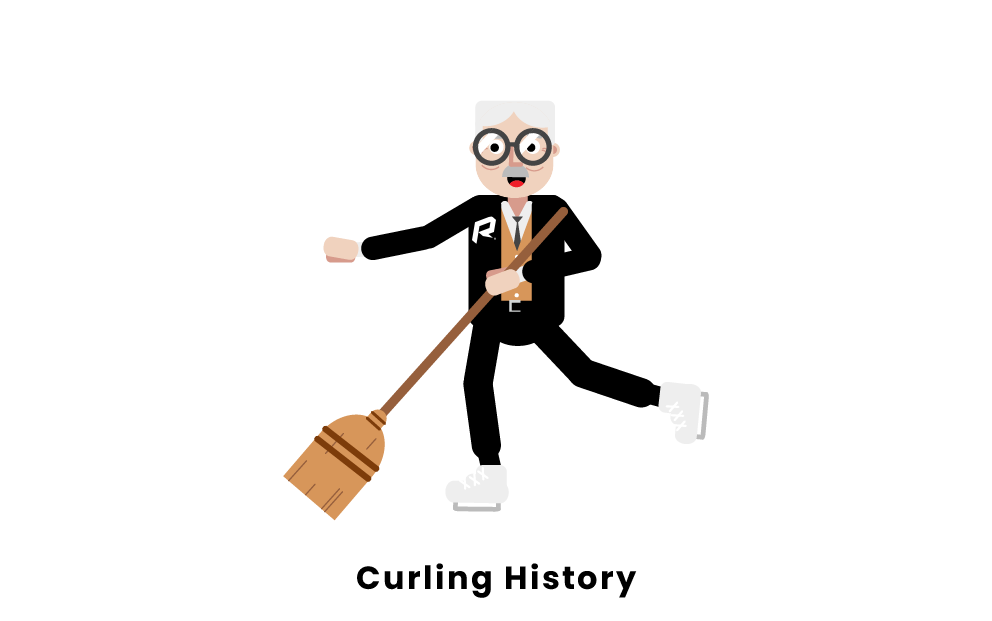 Curling has an extensive history dating back hundreds of years and spanning the globe. Read on to learn more about the history of curling and its rise to prominence as an Olympic sport.

A popular ice sport in cold, northern climates, curling is sometimes referred to as the “Roarin’ Game,” in reference to the sound made by its primary playing object, the large curling stone, which is slung across a field of ice in an attempt to cause it to stop in the center of a target area, known as the house. Though the modern form of curling is a relatively recent development, similar ice sports have existed for many centuries and were predecessors to the modern-day curling that is currently featured in the Winter Olympics.

Though curling itself was not an official sport until the 19th Century, similar sports have been mentioned in various historical records from much earlier times in human history. In the 16th Century, Flemish painter Pieter Bruegel (1530-1569) created a piece that depicts a sport very similar to curling being played on a frozen pond. Around the same time, in 1540, a record written in Latin by Scottish notary John McQuhin details a contest between two people at the monastery of Paisley Abbey, where a monk challenged a relative of the abbot to a stone-throwing contest performed over ice. While not identical to modern curling, these sports form the earliest beginnings of what would later become the sport of curling.

Modern curling emerged as a sport in the mid-1800s, with the first curling clubs forming in Scotland and later spreading to areas where Scotsmen were most likely to settle, such as Canada, America, Sweden, Switzerland, and New Zealand, among others. In 1838, the first Rules of Curling were drawn up in Scotland, and the first official curling club, the Grand Caledonian Curling Club, was founded in Edinburgh, becoming the governing body of curling. In 1842, curling had gained enough national popularity for it to be performed in a demonstration before England’s then-monarch, Queen Victoria. She was so intrigued by the sport that she granted her official permission for the Grand Caledonian Curling Club to be renamed the Royal Caledonian Curling Club in the following year.

Over the following decades, curling grew in popularity as a sport, and by the 1950s, it was popular enough for two of the primary nations who practiced it, Scotland and Canada, to create the Scotch Cup series, an international curling competition that was first held in 1959. Over the following decade, the Scotch Club series added six more countries to its roster of teams: the United States, Sweden, Norway, Switzerland, France, and Germany. The growing success of the Scotch Cup series led its representative countries to meet in Perth, Scotland, in 1965, where they formed the International Curling Federation, an arm of the Royal Caledonian Curling Club that supervised the sport outside of Great Britain. By 1967, the International Curling Federation (ICF) was established, and its new championship series, the Air Canada Silver Broom, replaced the Scotch Cup as the World Curling Championship. Over the following decades, curling continued to grow in popularity, so much so that the ICF renamed itself to the World Curling Federation in 1990.

While curling was developing on the international stage, its Olympic history endured a series of ups and downs. The sport was featured in the first-ever Winter Games, the Chamonix, France Games of 1924. However, it was dropped from the games until 1932, when it was featured as a demonstration sport in the Lake Placid Winter Games. After 1932, many years passed before a meeting was held in Edinburgh to discuss submitting the sport for Olympic consideration, but no progress was achieved. In that time, curling continued to be featured as a demonstration sport, appearing in four more Olympics, the 1936 Garmisch-Partenkirchen Games, the 1964 Innsbruck Games, the 1988 Calgary Games, and the 1992 Albertville Games. In the lattermost year, while meeting in Barcelona, Spain, the International Olympic Committee finally awarded curling medal status for both men and women as an Olympic sport. The sport made its official debut in 1998 during the Winter Games in Nagano, Japan. In 2002, the International Paralympic Committee officially approved wheelchair curling as a sport for mixed-gender teams, with the sport debuting at the Torino Paralympic Games in 2006.

In the present day, curling remains a popular sport, and several rule changes have resulted in further development and consolidation of the sport on the world stage. The most significant of these changes occurred in 2016, the 50th anniversary of the World Curling Federation, resulting in a significant number of rule changes regarding the procedures for sweeping the ice in front of the curling stone. In 2018, a new international competition, the Curling World Cup, debuted as a four-leg series for men’s, women’s, and mixed teams.

What is the history of curling?

The history of modern curling begins in the 1800s, when the first official curling club, the Grand Caledonian Curling Club, was founded in Edinburgh, Scotland. The club was eventually renamed the Royal Caledonian Curling Club. After expanding across the world, it developed the International Curling Federation in 1965, which later renamed itself the World Curling Federation in 1990. Curling was featured as a demonstration sport in various Winter Olympics between 1924 and 1992 but did not officially debut as an Olympic sport until 1998.

Curling was not officially invented by any one person but developed over the course of many centuries. The first reputed curling match is said to have occurred at Paisley Abbey in 1541, and involved a monk by the name of John Sclater challenging a relative of the abbot to a stone-throwing contest on the ice. The first official “inventors” of curling could be considered the men who developed the Grand Caledonian Curling Club in 1838.

Where did curling start?

Curling began in the country of Scotland, where sports similar to the modern form of curling had been played on frozen lakes and ponds since the Middle Ages. When Scottish immigrants began to move to North America, various small curling clubs began to form in places like Montreal and Michigan in the early 1800s. Still, the first official curling club, considered the “mother club” of curling, was the Grand Caledonian Curling Club, which was founded in Scotland in 1838, and was responsible for drafting the first official rulebook of curling.

Pages Related to History of Curling