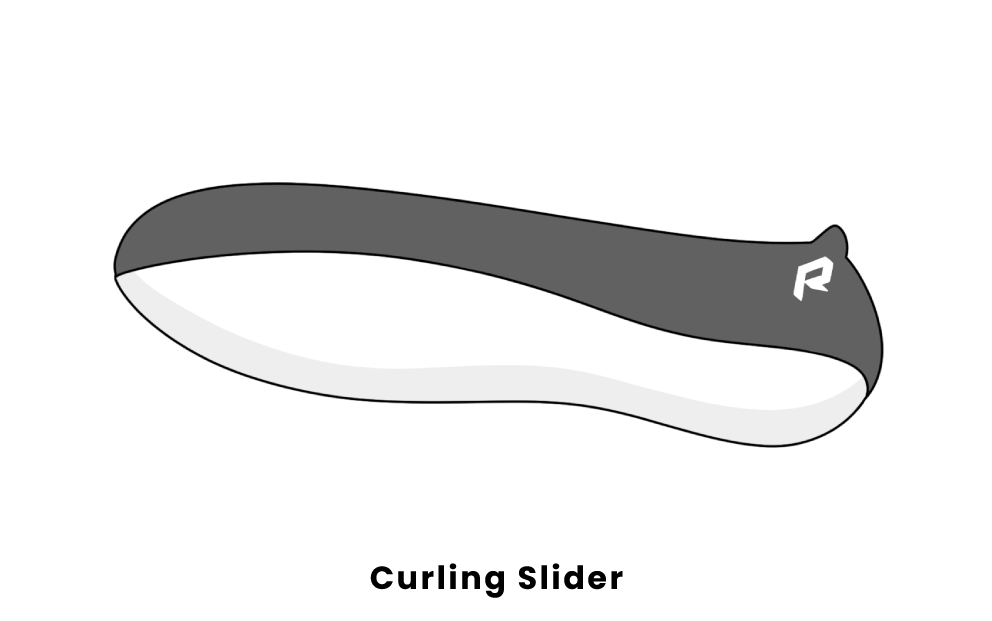 What is a slider?

When curlers deliver a stone, they use a slider on their shoe to glide along with the stone.

Simply put, a slider is a piece of teflon in the shape of a shoe bottom. The teflon slides along the ice and is either attached to a rubber top, a curler's shoe, or a boot that looks like the bottom half of a shoe.

At curling clubs, you will likely find sliders that curlers will step on before throwing a stone, or sliders that get attached to a curler's shoe by an elastic band. After you gain curling experience, you may want to purchase a slider that attaches to your shoe, like the one seen above.

Curling shoes usually come with a slider that is built in to a curler's sliding foot. (We will learn about the sliding foot later in Curling Stone Delivery Prep.) The teflon one the shoe is thicker than the teflon on a slider. This allows curlers to glide much greater distances from the hack while delivering the stone.

Curling sliders allow curlers to move smoothly across the ice without any friction. Sliders are placed into the bottom of normal shoes, turning them into a shoe appropriate for curling. They are an alternative to buying typical curling shoes which can be quite expensive. Normal curling shoes have one foot with a smooth bottom and one without. Sliders both have smooth bottoms, but come with anti-sliders that cover up the smooth surface when athletes walk on normal flooring. It is suggested that sliders only be used on the ice, because regular floors can damage the slider, and they can be difficult and unsafe to walk in.

Sliders are typically made of Teflon, and come in slide-on and strap-on versions. The best result occurs when they are worn with rubber-soled shoes. While athletes are at more amateur levels and their feet are still growing, sliders are recommended over more permanent curling shoes. They can be bought online or at some sporting goods stores. Since curling is not as common of a sport as soccer or football, equipment may be harder to find. Specialty stores such as Brooms Up or Goldline Curling Supplies are highly recommended for finding supplies.

The balance plus slider in curling is a specific step-on and/or pull-on slider manufactured by Balance Plus.

The temporary slider in curling is any slider that is not permanently attached to a curler's shoe. Most curling shoes that are produced have a slider built into one of the shoes, whereas other shoes do not have sliders built in, requiring a curler to use a temporary slider.

The teflon slider in curling is what curlers use to slide on as they deliver a stone. All sliders are made with teflon on the bottom because it has a very low coefficient of friction when it is in contact with ice.

A tape slider in curling is an adhesive strip that attaches to a curler's shoe and acts as a slider. It usually comes in a roll so that the appropriately sized piece can be cut and attached to each person's shoe.

The steel slider in curling is a disk made of stainless steel that can also act as a slider. Although these are rare, they function exactly as a teflon slider would.

The stand-on slider in curling is a slider containing no strap for a curler to attach to their shoe. Thus, the curler must step on the slider, and keep a sufficient amount of weight on the slider so it does not slip out from under them.

The slip-on slider in curling is a slider that contains an elastic band around it. Thus, curlers can easily attach and remove it from their shoe.

The half slider in curling is a slider that covers only the front half of a curler's sliding foot.

The full slider in curling is a slider that covers a curler's entire sliding foot.