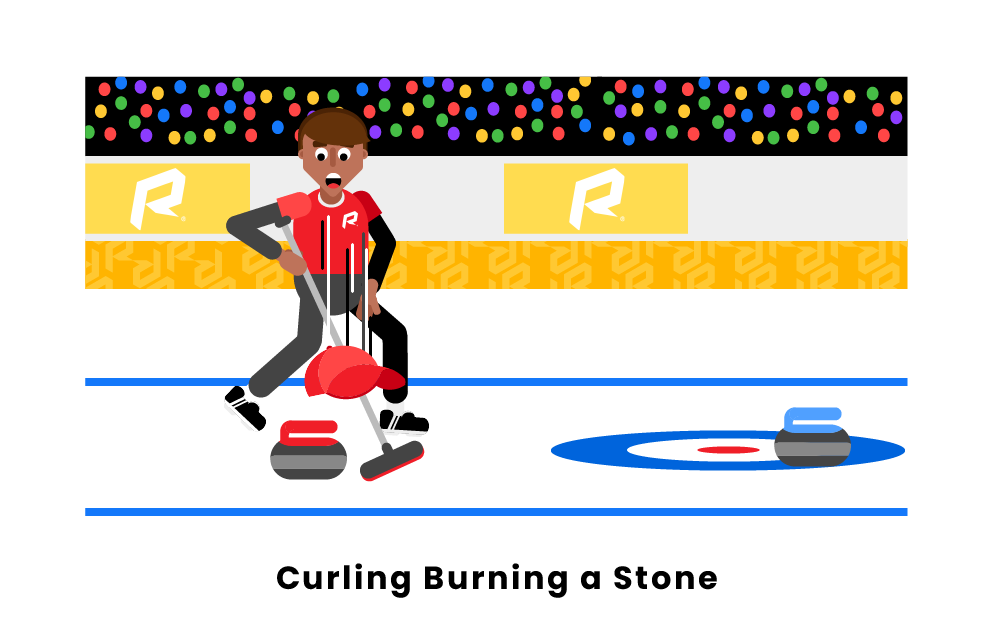 During a game of curling, there is always a slight chance that something may hit a stone while it is in motion. The sweepers may accidentally hit the stone with their broom, or a hat may fall on to the stone. This is called burning a stone. Read on to learn about what happens if a stone is burned.

If any part of the throwing team's broom, articles of clothing, or any other outside object. touches the stone as it moves down the ice, the stone is considered to be burned. This is because anything that touches the stone can alter its trajectory, no matter how large or small. Therefore, the stone was disturbed before it reached its final position. Unlike hog line violations, there is no sensor or device that can determine when a stone is burned. Therefore, it is expected that curlers be honest if they burn a stone. There are two situations in which burned stones can occur, and the outcomes can vary quite a bit.

The first case of a burned stone is when it is touched or disrupted while the stone was moving down the sheet. If a burned stone is called, the rock can be removed from play immediately. If it is not immediately removed, it will come to rest, giving the non-offending team a few options. The first option is to remove the burned stone and replace all other rocks to their original location. The second option is for the non-offending team to place all stones in a reasonable location where they likely would have ended up had the stone not been burned. The final option is to allow all stones to remain where they end up. The opposing team has the choice of any of these options, and their choice will likely be influenced by whether or not the stone’s trajectory was actually changed.

The other violation is when a player accidentally touches or moves a stone that has already come to rest. In this case, if the displaced stone had no effect on a moving stone, it is returned to its original position. If a displaced stone would have changed the course of a moving stone, the non-offending team has similar options as for a burned moving stone. The non-offending team has the option to remove the stone which would have been altered while replacing all displaced stones, place all stones where they would have ended up if the stone was not moved, or leave all stones where they end up.

Every now and then, a stone is accidentally removed from play. While there is not a specific penalty or rule broken, it was an honest mistake that needs to be fixed. Curling is a game of skill, respect, and honesty.

Everyone makes mistakes. Sometimes, curling stones are accidentally removed when they weren't supposed to be removed. For example, someone throws a takeout, and a stone ends up near the sideline. Someone believed that it hit the sideline border and rolled back into play. Therefore, they remove it from play. However, that stone never reached the sideline, and should have remained where it was.

When a stone is accidentally removed from play, someone on either team may notice it. If someone notices a stone was accidentally removed from play, they should notify their skip immediately. Then, the skips will figure out its prior location on the sheet. Usually, the skip/team that was inconvenienced by the mistake will propose a location of where they think it should be placed, and the opposing team's skip either agrees or suggests a spot that they believe was closer to where the stone would have been.

After the skips determine where the stone is supposed to be, it is placed in that location, just as if it was never removed in the first place. Ideally, there is nearly no difference between where the stone originally was stopped, and where it was moved after being accidentally disturbed.

Who gets to choose what to do if there is a burned rock in curling?

When there is a burned rock in curling, the opposing team who did not throw it gets to decide what happens. This consists of three options, which are handled in good faith because the curling community prides itself on sportsmanship. The opposing team can choose to ignore the foul and continue play if they feel the burned rock was the result of an accident or had no impact on play, they can rearrange the stones to a position they feel they would have landed at if not for the burned rock, or they can remove the stone that was burned from play.

What happens if you kick a curling stone?

The result of kicking a stone that was just thrown can vary. If the contact occurred before the stone passed the hog line, then that stone is automatically removed from play. However, if the contact occurred after the stone has passed the hog line, the non offending team gets to decide whether to ignore the foul, remove the burned stone, or rearrange the stones into the position they feel would have resulted if not for the contact. This decision is based on intent and the kicked stones impact on the stones around it.

What happens to a rock that is burned outside of the hog line?

A rock that is burned outside of the hog line is up to the discretion of the non-offending team. If the course of the stone was likely not altered, the opposing team may allow the shot to continue normally. If they do feel as though the burned stone’s course has been altered in some way, the non-offending team has two choices. They can either remove the burned stone from play and return all other stones to their original positions, or they can reasonably place the stones where they likely would have ended up had the stone not been burned.