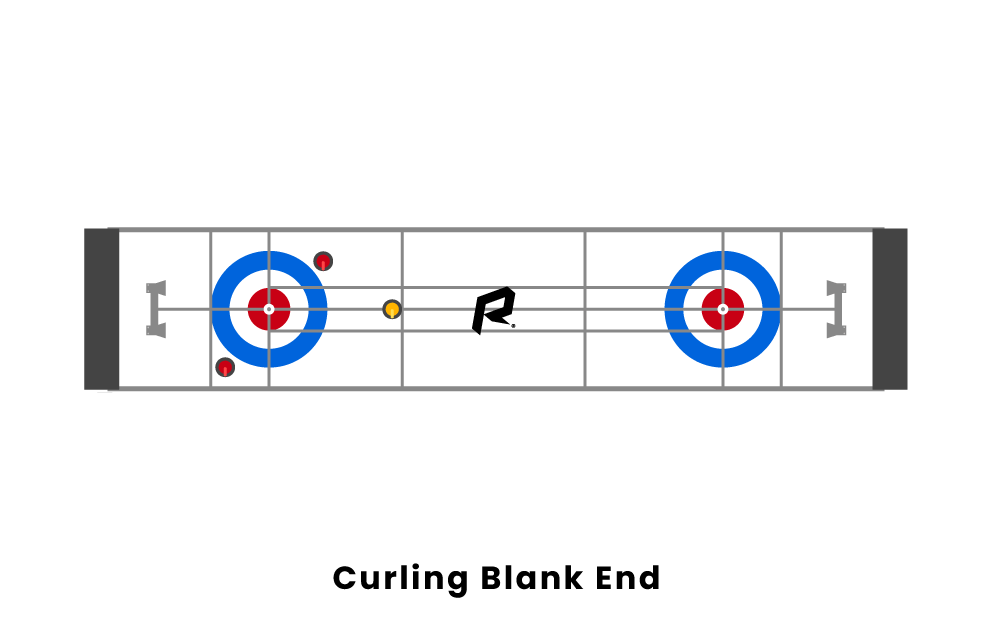 In curling, the team that has the hammer is trying to blank the end. The opponent (who doesn’t have hammer) would never want an end to be blanked because they will not be able to get the hammer back.

How To Blank Ends

Although it may seem simple to remove your opponent’s stones from play, there is actually a bit of strategy associated with it. In addition to keeping your opponent’s stones out-of-play, your stones also need to remain out-of-play. Before you continue reading, think about the type of shot that allows you to takeout an opponent’s stone, and roll out of the house. This is an essential shot when trying to blank an end. Your goal for this end is to keep the house as empty as possible. This will make it much easier to blank the end.

Beginning of the End

If your team is trying to blank an end, the beginning of the end may look a bit different than normal. Your opponent will probably start the end off similar to any other end by throwing a center guard, or a stone into the Top 4 Foot. If it ends up in the 4 Foot, your team can perform a hit and roll on the stone, resulting in an empty house.

If your opponent throws a guard, you will need access to the Button later on. Therefore, it is a good idea to keep it away from the centerline. Since it is only the first shot of the end for your team, the Free Guard Rule is still in effect. Therefore, your team can tick the guard, but not peel it. Make sure that the guard is ticked close enough to the sideline such that it cannot be used as a corner guard.

For the next shot, the same thing will most likely happen. If it is a guard, throw a tick shot. If it is a draw into the house, throw a hit and roll.

Middle and Final Shots of the End

As we approach the middle of the end, the exact same types of shots will probably occur. Your opponent will likely continue to throw draws and you will continue to throw hit and roll shots. If any of your opponent’s stones are in the guard zone and can be used as guards, make sure to peel them. However, your priority is to keep the house empty.

These types of shots will likely continue for the remainder of the end. As you finish the end, make sure that there are no biters in the Back 12 Foot that would prevent your team from blanking the end. If not, you are on your way to successfully blanking the end.

Defensive sweeping occurs when a team sweeps their opponent’s stone behind the tee line. It is crucial to make sure that there are no biters in the Back 12 Foot. One way to make sure that this does not happen is by being prepared to defensively sweep any of your opponent’s stones in the house when your team throws hit and roll shots. Even though defensive sweeping may not be required, it is better to be prepared to defensively sweep rather than end up with a biter.

There may be times in which your team is trying to score 2 or more points with the hammer, but it is just impossible to do so. If there are few stones in the house, you may be able to take them out and blank the end. This strategy is helpful anytime throughout the game, because your team can retain the hammer, and not be forced to score 1 point.

If you are approaching the last few shots of the end, the house only has a few stones in it, and your team will not be able to score 2 points, it is okay to throw a couple takeouts and remove your opponent’s stones from the house. Most likely, your opponent will return the favor and you should be able to blank the end.

Here, your team’s initial strategy was to score 2 or more points. However, it turned out that your team decided to blank the end instead. Overall, this is a smart strategy to pursue because your team receives another opportunity to try and score two points. If this occurred closer to the end of the game, you would also limit your opponent’s opportunity to have the hammer.

If you are winning, it is helpful to blank the end because your opponent may need to try and steal a point or two in order to win. If you are losing, this is somewhat helpful because you can try and score 2 or more points with the hammer, but it limits the other opportunities you have to reach your opponent’s score and win the game.