How Does Scoring Work In CrossFit? 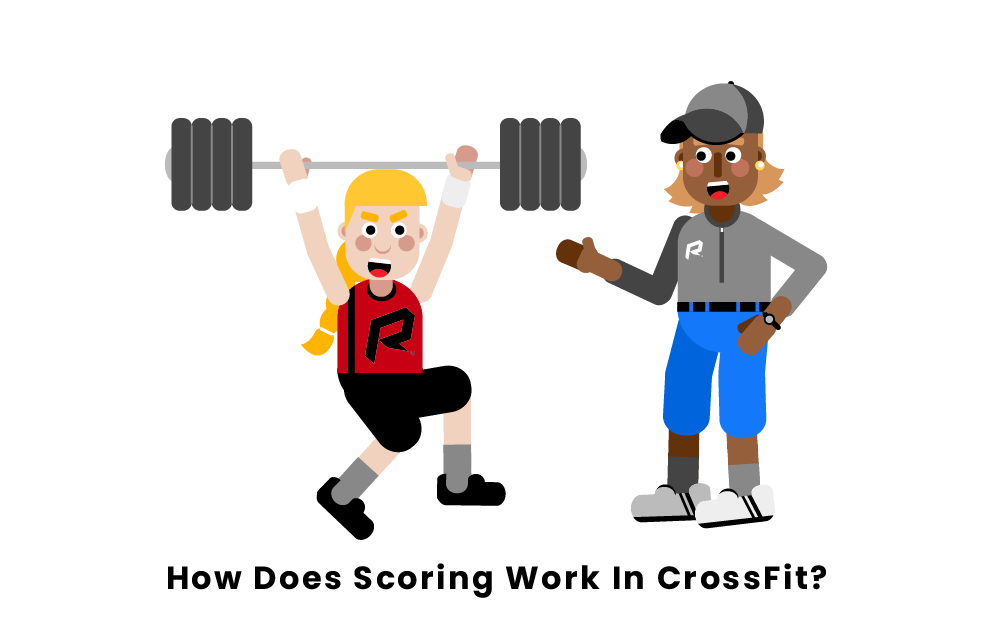 CrossFit is a fitness competition sport where individuals compete for the title of the “Fittest on Earth.” The competition uses a relative scoring system, awarding competitors based on where they finish in relation to others.

Throughout various events, participants push themselves to place as high as possible and earn points.

The CrossFit Open is the initial stage of qualifying for the CrossFit Games. This competition has both an individual and team portion. Unlike the Games, the Open is held over three weeks. Participants are given one exercise to complete each week, and the teams that perform well enough move into the elimination stages.

In individual scoring for the Open, a relative point system is used. For example, the person or team who comes in first place will receive one point, while the person who comes in 20th place will receive 20 points. The goal of this stage is to end the three rounds with the least points possible. This system is used as there are hundreds of contestants each year, so making a descending point value system would be much more complicated.

Similar methods of scoring are used for the Teams event of the Open. Teams compete to accrue the fewest points possible and avoid elimination. Success in the Open can secure teams a spot in the CrossFit Games, making it some of the most intense competition in the sport of CrossFit. 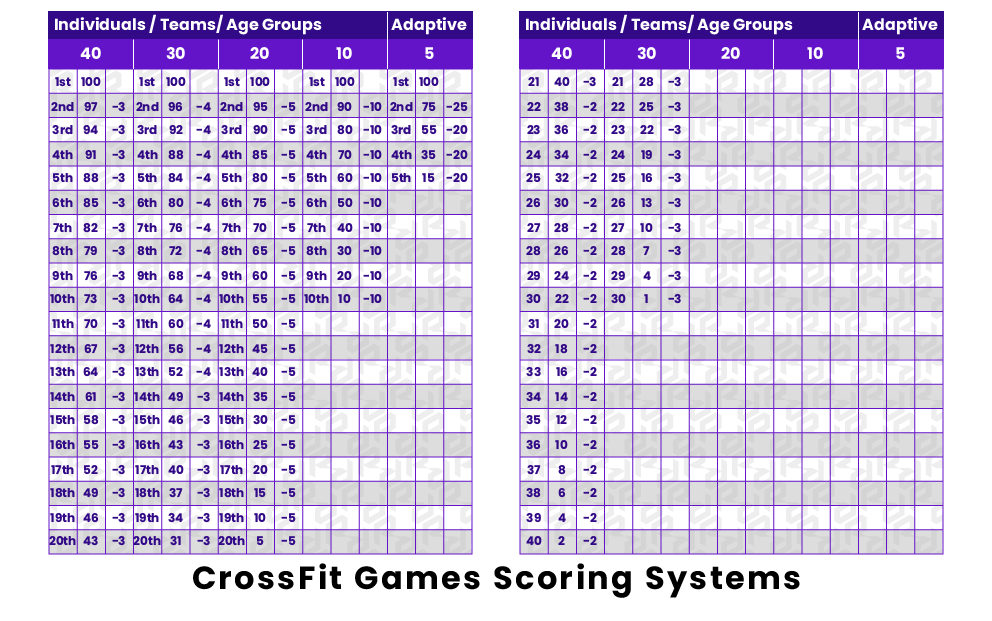 The CrossFit Games represent the world championship for CrossFit and are the culmination of the results of the CrossFit Open. There are two integral forms of scoring in the CrossFit Games: individual scoring and team scoring. Read on to learn about each scoring system and how they differ from one another.

Participants are awarded points based on where they finish compared to the other competitors. The athlete that finishes in first place is always awarded 100 points. After the first place position, points decrease as the ranking decreases. The amount that points are decreased by varies based on the number of competitors for that specific event. As the events progress, the lowest-scoring athletes are eliminated, resulting in fewer competitors with each new event. Therefore, the point reductions continually increase as the competition proceeds and are the greatest in the final event.

While many athletes compete in the CrossFit tournament individually, there is also the option to participate in the team's competition. Like the individual competition, the team’s competition has its own scoring table. For each event, the team that finishes in first place is awarded 100 points. Teams will receive a decreasing amount of points the lower they place in each event. The amount of points a team loses in each event depends on how many teams remain in the competition. In the 2022 competition, there are 38 teams to start, narrowed down to five teams left competing in the fifth and final event.

In the event that there is a tie within either of these scoring systems, the deciding factor will be whichever athlete/team has the highest/lowest score in their best event. These events do not need to line up between tied competitors because each event is worth the same number of points.

After all the events are completed, the points are tallied up for each of the competitors. The participant or team with the most/least number of points wins the CrossFit competition, depending upon the scoring system in place.

Each year, events in the CrossFit competitions vary, challenging athletes to prepare for all different types of exercises. The exercises tend to be physically demanding, requiring athletes to have a high level of strength and flexibility.

A few common exercises include double unders, muscle ups, and toes to bar. A double under is a jump rope exercise where the rope is swung underneath the feet twice per jump. This exercise can be difficult because it requires a lot of focus and proper timing so that one does not trip on the rope. A muscle up involves the athlete executing a pull up, then transitioning their body to above the bar and pressing up until their arms are straight. This exercise requires an adequate amount of momentum along with upper body and core strength. Finally, the toes to bar exercise is when an athlete hangs from a bar and swings their legs up so their toes touch the bar. In order to complete this exercise successfully, it is important to have a strong grip on the bar because of the leg swinging involved. It is also important to have strong core strength and develop a considerable amount of momentum to allow the toes to come up to the bar.

How does a CrossFit competition work?

A CrossFit competition involves athletes completing a variety of intense exercises against others. The goal is to finish above the competition for each event. Athletes are awarded more points the higher they rank among their peers. Throughout the competition, the lowest scoring participants are gradually eliminated. After the final event, the athlete or team with the highest overall score wins.

What is the CrossFit Games points system?

The CrossFit Games are an annual competition that brings together some of the best athletes in the world to compete for the title of Fittest on Earth. The goal is to finish above the competition for each event. Athletes are awarded more points the higher they rank among their peers, with 100 points going to first place and decreasing for each position below. Throughout the competition, the lowest scoring participants are gradually eliminated. After the final event, the athlete or team with the highest overall score wins and is named the Fittest on Earth.

What is the difference between a Workout Rank and a Workout Score?

In CrossFit competitions, each athlete is assigned a workout rank and a workout score based on their performance. A workout rank is your place in relation to other competitors and the number by your name represents your standing. For example, a 1 means first place and a 2 means second place. A workout score is the number of the points you achieve for how many reps you’ve completed. The person with the most reps will get 100 points and the person with the least will get 10 points.

How is CrossFit scored?

CrossFit is scored using a relative scoring system, with the first-place finisher receiving one point and lower-placing finishers getting proportionally greater numbers of points. This system is used for individual and team competitions. There is a qualifying period in competition called the CrossFit Open, which lasts for three weeks. During this period, individuals and teams accrue points by competing, with the lowest-scoring ones qualifying for the CrossFit Games, which is the championship tournament. In the CrossFit Games a similar relative scoring system is used, except that the first-place finisher gets 100 points and the other competitors get proportionally lower point values, with the goal of accruing the most points during the tournament.

What is the CrossFit Games scoring table?

Pages Related to How Does Scoring Work In CrossFit?