How Does Scoring Work In Croquet? 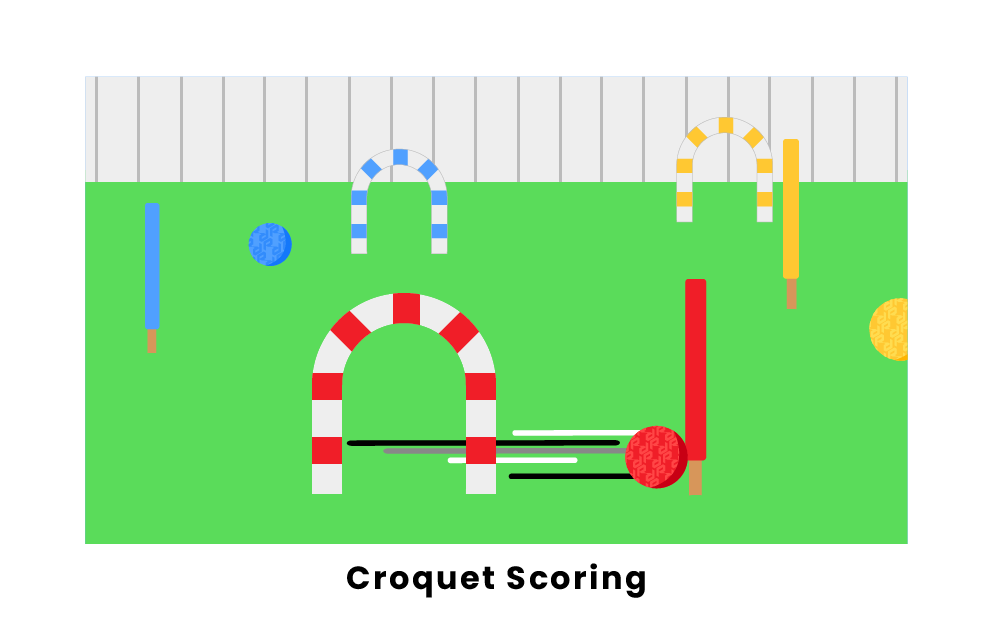 Croquet is one of the oldest games still being played today, and its scoring system has remained simplistic throughout time. Players hit balls across a grassy surface, advancing through set hoops in sequential order until finally being tasked with hitting a peg to earn their final point. Though croquet does have a points system, the score is usually kept by determining a player or team’s progress through the different objectives of the game. Read on below to learn more about how players score in croquet and when the game ends.

While a player can earn ‘points’ in a game of croquet, their position relative to the opponent is usually measured by how many hoops they have cleared with each of their balls. Both sides are given two balls to start and must clear through six planted hoops before going for the final peg to end the game. A player wins when they have cleared the six hoops with both balls and hit the final peg with both balls.

For a player to advance past a hoop, they must have their ball pass entirely through the metal frame in the preset direction. If a ball does not go entirely through the hoop or is hit in the wrong direction, the hoop is not cleared. The six hoops are usually arranged in a set order, with the first four forming a larger rectangle and the last two being placed in the center of that rectangle. While players must pass through every hoop with both of their balls, the order in which they hit each ball is entirely up to them.

A game of croquet is completed when one side has cleared through all six hoops with both of their balls and has hit the center peg with both balls. This total adds up to 14 points required for a win, and the first player to reach this mark takes the game. After clearing all six hoops, players are directed to a peg placed directly in the middle of the hoops. A player must strike the peg with both of their balls to earn their final two points, and once they do so, the game is over. The peg can be hit from any direction, and the order in which the balls are hit does not matter. While hitting the peg may seem easier than advancing through the tight hoops, this part of the game often provides a challenge since it is tougher for players to earn extra shots, meaning they must be efficient with their hits.

Usually, a player only gets one hit per turn in croquet. This style of play makes it very hard to get around all six hoops efficiently, as the length between each hoop and the forced changes in direction call for multiple hits. However, a player can earn an extra shot (or two), depending on what they do with their first hit. If a player clears a hoop with their first hit, they automatically earn another turn and can go again. A player can also earn two extra shots if they hit any of the other three balls in play with their first shot. Strategically gaining shots throughout a game can be very beneficial to players who are attempting to score as quickly as possible, since playing one shot per turn can be very inefficient. Due to this, players do not always go for a hoop on their first hit, oftentimes opting to hit another ball and gain two extra shots.

Although lawn croquet or “six wickets” is played all over the world, a very common version of croquet in America is nine hoops croquet (also known as nine wickets). In this setup, nine hoops are planted along with two pegs. The hoops are set in a pair of distorted diamond patterns, with one peg at the bottom of the lower diamond and another at the top of the upper diamond. Just like six wickets, players must clear through the hoops in the correct order and direction and finish by hitting a peg, but there are some extra steps along the way.

Five of the nine hoops require players to pass through them twice with each ball. This is because, in order for players to make their way around the diamonds, they must clear five of the hoops in both directions. This amounts to a total of 14 points that must be earned by each ball, as well as one point for the peg in the middle of the game and one point at the end for the second peg. The game ends when a player has cleared each hoop and hit both pegs with both of their balls, earning a total of 32 points.

How many points must a player score to win a game of croquet?

In a regular game of lawn croquet, a player must score 14 points before their opponent to win a match. This comes from clearing each of the six hoops with both balls, then hitting the center peg with each ball at the end of the game. In a game of nine wickets, players must clear through a total of 14 hoops with each ball and must hit two pegs with each ball, amounting to a total of 32 possible points.

How many points can a player earn in a single turn?

According to the rules of the game, there is no defined limit to the number of points a player can score on each turn, but this number is capped by how many shots a player gets. Players start with one shot per turn and can earn an extra hit if they clear a hoop or two extra hits if they collide their ball with another. However, players can only earn two extra hits once per turn, as the extra shots are not cumulative.

How do you win in croquet?

A player wins in croquet by being the first to clear all six hoops with both balls and hit the peg with both balls. This amounts to 14 points or actions that need to be completed to win the game. In nine wicket croquet, players must pass through a total of 14 hoops with each ball and hit both pegs with both balls to win, equaling 32 points.

Pages Related to How Does Scoring Work In Croquet?