Where Is Cricket Most Popular? 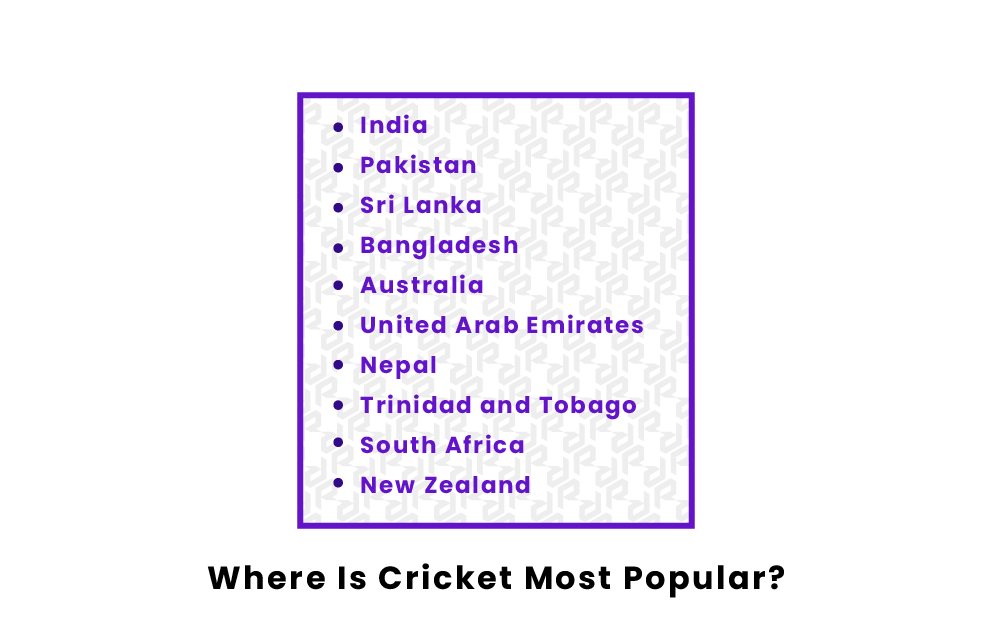 Although it is not as popular in the United States, cricket is one of the most popular sports in the world. It ranks number two in popularity, just behind soccer, with 2.5 billion estimated fans worldwide. With that in mind, there are a lot of countries where cricket is quite a popular sport. Some of those countries are listed below.

Below are the ten countries where cricket is the most popular, ranked on a regional popularity scale based on internet searches. The countries are listed from most popular to least popular.

India is the country where cricket is the most popular. Regarding the regional popularity scale defined above, India was given a 100 on a scale from 1-100. It should be no surprise that cricket is India’s most popular sport. Everyone from adults to kids adores the sport, and some even consider it so popular that they treat it like a religion. Millions of people in India tune in to every match, hanging on the edge of their seats to see who wins.

Cricket betting has been rising in popularity in India in recent years. Like in other countries, sports betting is becoming more and more common. With how popular cricket is in India, betting on the games comes naturally to Indian citizens. Since everyone is well-versed in the game and the Indian Premier League, they can make educated bets without much research or trouble. Cricket betting is easily accessible, easy to play, and well understood by the people of India. Cricket is an important part of Indian culture, and the people love every minute of every match they watch.

Coming in second behind India in cricket popularity is Pakistan. On the regional popularity scale, Pakistan received a score of 70. Just like in India, cricket is the most popular sport in Pakistan. Not only is it the most-watched sport, but it is also the most-played sport by Pakistani citizens. Some reasons why the game is so popular in Pakistan include that it is an affordable sport to play for all, can be played anywhere and on all sorts of surfaces, it is highly sponsored throughout the country, and there are lots of cricket idols for the next generation to look up to.

As seen in the list above, after India and Pakistan, the rest of the top five include Sri Lanka, Bangladesh, and Australia. Sri Lanka was given a regional popularity score of 68, Bangladesh scored 42, and Australia received a 32. The scores that rounded out the top ten were The United Arab Emirates (30), Nepal (28), Trinidad and Tobago (26), South Africa (24), and New Zealand (22). While cricket is popular worldwide, it is the most popular in Asian countries. Four of the top five and six of the top ten nations are on the Asian continent. Additionally, cricket is most popular in the Eastern Hemisphere, as Trinidad and Tobago is the only nation in the Western Hemisphere to crack the top ten. It is also clear that popularity leads to national success in cricket, as the ten participants in the 2019 Cricket World Cup included seven of the top ten nations in terms of popularity. We shall see if this trend will continue in the next edition of the tournament, as the tournament takes place in India in February-March 2023.

Overall, cricket is quite popular in nations around the world, with an even greater interest amongst nations in Asia. The popularity of cricket across the globe is only growing, and perhaps some different nations will appear in the top ten in the years to come.

Pages Related to Where Is Cricket Most Popular?