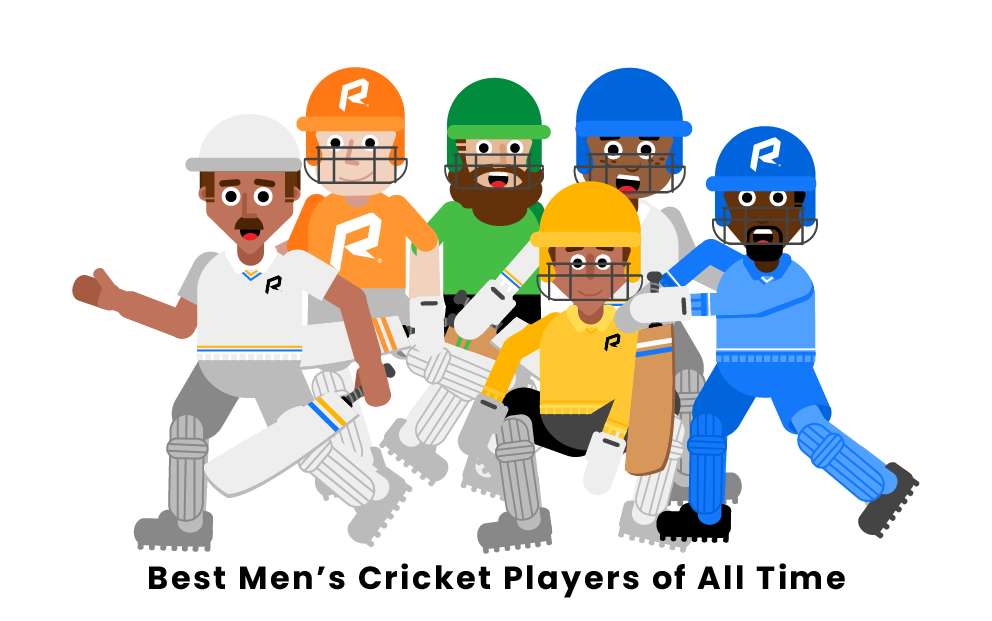 Cricket is one of the most widely watched and consistently attended sports in the world. For hundreds of years, cricketers have enchanted fans, rallying them around their local or national teams. Read on for a list of the best cricket players to ever take the pitch, from the golden era to modern times.

Who are the best men's cricket players of all time?

One of cricket's greatest batsmen, Sachin Tendulkar set several scoring records while captaining the Indian national team and playing for Mumbai's domestic and IPL clubs. A star from a young age, he started playing cricket at 11 and first represented India at 15 in a Test match against Pakistan. The same year he was recruited by the Mumbai Cricket Association (MCA), becoming the team's leading run-scorer in his rookie season. Tendulkar spent his entire 25-year career with MCA, also playing first-class for Yorkshire, East Bengal, and the Mumbai Indians. Earning the nickname "Master Blaster," Tendulkar holds the all-time records for most runs scored in international, ODI, and Test cricket. He is the only player to have scored 100 centuries in international cricket and was the first to score a double century in an ODI match.

Sir Donald Bradman was the best cricket batsman of all time, achieving an incredible 99.94 batting average over his Test career. An Australian who earned the nickname "The Don," he grew up playing tennis and cricket in Bowral. At 18, he was invited to play grade cricket for St George in Sydney, and the next season he moved to first-class, playing for the New South Wales Blues. After a slow start to his Test career, he went on to achieve utter dominance, particularly against England, who only managed to win the Ashes once over the seven times they played Australia with Bradman on the team. The premier cricket player of the 1930s and 40s, Bradman finished his first-class career with West End Redbacks. In addition to the record for highest Test career batting average, he also holds the title for most Test runs in a day, at 309.

Jacques Kallis was the best South African batsman ever. One of the sport's best all-rounders, he is the only cricketer ever to take over 250 wickets and score more than 10,000 runs in both Test and ODI match play. Kallis grew up in Cape Town and played cricket in high school. As a teenager, he played for Netherfield in England as well as South Africa's national U-17 team. At 19, he joined South Africa's Test team, where he would go on to average 55 runs per innings over his 166 match career. Kallis was one of the most dominant cricket players in the world in the late 1990s and early 2000s, playing for first-class clubs in South Africa, England, India, Australia, and Trinidad and Tobago.

The "King of Spin" Shane Warne is one of the best bowlers in the history of cricket. The Australian right-handed leg break bowler was also known as "Professor" because of his precision and style. Warne grew up in Victoria, playing cricket and Australian rules football. As a teenager, he played for the St Kilda U-19 team. Warne then attended the Australian Cricket Academy and played Lancashire League cricket in England. At 22, he joined Victoria's first-class squad; he moved up to the Australian Test team a year later. Within a few seasons, Warne established himself as one of the most dominant bowlers in the sport. At the end of his long and decorated career, he became the first player to take 700 Test wickets.

Sir Ian Botham was one of the best all-rounders in the history of cricket. A physically imposing British right-hander nicknamed "Beefy," Botham was a fast-medium bowler known for his swing bowling as well as his aggressive batting. Growing up in Cheshire, both his parents played cricket, and Botham joined his junior school team at age nine. Nurturing a healthy obsession with the sport, he left school at 16 to pursue cricket, playing part-time for Somerset's U-25 team. By 18, he was a Somerset regular and made his first-class start. Botham was promoted to England's national team at 22, impressively bringing home the Ashes in his debut. Racking up the runs and wickets, Botham established himself as the best all-rounder of the 1980s. Although his power faded over time, he played for 25 years, finishing his first-class career at Queensland, Worcestershire, and Durham.

Ricky Ponting was the greatest modern Australian cricketer, known for his aggressive and high-scoring bat. The most successful captain in international cricket history, Ponting helmed the Australian national team in Test and ODI competition during the 2000s, leading them to a record-setting 220 victories over 324 matches. Raised in Tasmania, Ponting played U-13 cricket for Mowbray, snagging a Kookaburra bat sponsorship in eighth grade. At 17, he joined Tasmania's first-class squad. At age 20, he joined Australia's national teams, making his ODI and Test starts in the same year. Soon promoted to captain, he led an exceptional Australian team to 77 Test and 229 ODI victories. In first-class cricket, Ponting also played for Somerset, Kolkata, Hobart, Mumbai, Surrey, and Antigua. Ponting is Australia's highest-scoring cricketer of all time in both Test and ODI matches.

Who is the greatest men's cricket player of all time?

The greatest men's cricket player of all time is Sachin Tendulkar of India. Although Australian Sir Donald Bradman makes a claim for greatest with his record-setting 99.94 Test batting average, Tendulkar had unparalleled longevity and ability to score. He holds all of the records for most matches played, most runs scored, and most centuries scored in Test, ODI, and overall categories. Tendulkar made innumerable contributions to the sport, drawing widespread adoration by fans and setting the model for the career of a modern international cricket superstar.

Who is the highest run-scorer of all time in men's international cricket?

The highest run-scorer of all time in men's international cricket is Sachin Tendulkar, with 34,357 runs scored over his 24-year international career. This impressive total includes his 15,562 Test runs and 18,426 ODI runs, both of which are also records for most of all time in their respective match formats. Runner up is Kumar Sangakkara with 28,016 runs; in third place is Ricky Ponting with 27,483 runs.

Who holds the record for the most career centuries in cricket?