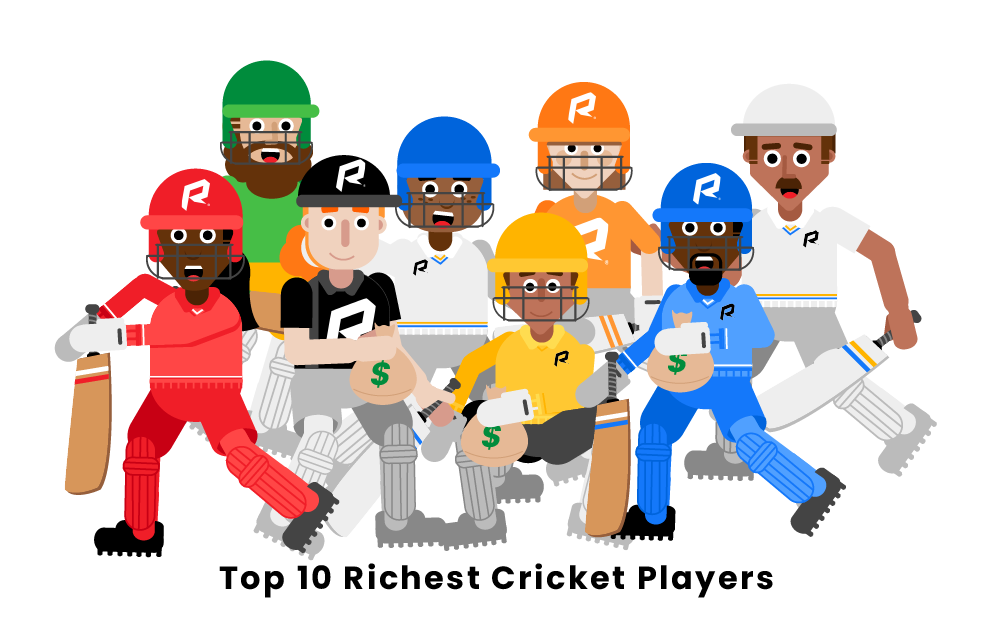 Who are the richest cricket players?

Sachin Tendulkar is a retired Indian cricket player with an estimated net worth of $150 million. He was the former captain of the Indian national cricket team. As of November 2013, he had officially retired from cricket. He is one of the greatest cricket players and icons of his time, with superior batting skills. His batting skills were based on the simple principles of economy of movement, perfect balance, precision in stroke-making, and anticipation. There were no apparent weaknesses in Tendulkar’s performance as a player, and he continues to be a fan favorite and icon.

Virat Kohli is one of the best batsmen for the Indian Cricket team, with a net worth of $127 million. His cumulative salary/winnings are well over $2 million, and his endorsements are worth $24 million. Although he does not have the highest net worth, he is among the highest-paid in the sport. Kohli is the captain of the Indian national cricket team and is considered one of the best batsmen in the world. He is one of the three Indian cricket players who have been selected by the nation’s A+ contracts, which guarantees him an annual salary of $1 million. Across Facebook, Twitter, and Instagram, he has over 135 million followers. Some of his major sponsors include Audi, Google, Flipkart, Colgate-Palmolive, Puma, and Hero.

Mahendra Singh (M.S.) Dhoni is a former Indian cricket player and former captain of the Indian national cricket team, with a net worth of around $113 million. As of August 2020, he officially retired from playing cricket. His position is the wicketkeeper-batsman. Under Dhoni’s captainship, India won the 50-over World Cup in 2011, World T20 in 2007, and topped the test rankings for 18 months. Dhoni is recognized for his leadership skills, calmness on the field, and batting style. Some of Dhoni’s major sponsors include Pepsi, Reebok, Lays, Colgate, and Boost.

Ricky Ponting is a cricket coach, former Australian cricket player, and commentator with an approximate net worth of $70 million. He was also the captain of the Australian national cricket team. As of December 2012, he officially retired from playing cricket. His position is the top-order batsman. He was the most successful Australian captain in test history during the Boxing Day test in 2009-10. He led Australia to 26 undefeated consecutive World Cup matches during the 2011 Cricket World Cup. Ponting is considered one of the greatest players of his generation and one of the most successful run-makers in Australia.

Brian Lara is a former Trinidadian cricket player with a net worth of $60 million. He played for the West Indies national cricket team and was their former captain. As of April 2007, he officially retired from playing cricket. He plays cricket as a batsman. In 1994, he broke the batting record and scored 375 runs against England and then 501 runs against Warwickshire. In 2012, Brian Lara was inducted into the ICC Hall of Fame. Lara is considered one of the greatest cricket players ever.

Sourav Ganguly is an Indian former cricket player and current cricket executive with a net worth of approximately $50 million. He currently serves as president of the Board of Control for Cricket in India (BCCI). Ganguly played 16 years for the Indian national cricket team from 1992 to 2008 and domestic cricket for 22 years from 1990 to 2012. Beyond his presidency and playing career, Ganguly has served as a commentator for several cricket matches since his retirement.

Shane Warne is a cricket commentator and former player for the Australian national cricket team; his net worth is estimated at $50 million. As of December 2006, Warne announced his retirement from cricket. He is known as one of the most effective bowlers in cricket history. Warne had good disguise on his top-spinner and great control on 2-3 different googlies. He was the first-ever cricket bowler to take 700 test wickets in 2006. Despite being involved in some controversy throughout his career, Warne is known for his impeccable bowling skills.

Jacques Kallis is a cricket coach and former South African cricket player with a net worth of $48 million. He played for the South African national cricket team. As of July 2014, Kallis announced his retirement from cricket. He is known to be an allrounder when playing cricket. Kallis is a right-arm fast-medium swing bowler and right-handed batsman. He is a forceful batsman and known for his surprising swing and pace as a bowler. Kallis is regarded by fans as one of the greatest batsmen for South Africa.

Virender Sehwag is a former Indian cricket player with a net worth of around $45 million. He played for the Indian national cricket team, and as of October 2015, Sehwag announced his retirement from international cricket. He was known as a skilled batsman. Sehwag has accumulated Test runs at a faster pace than anyone in the history of cricket with minimal footwork and maximum intent. His approach to scoring runs is to score as many runs as quickly as possible. Sehwag has successfully compiled massive scores at an impressive speed.

Yuvraj Singh is a former player for the Indian national cricket team who has an approximate net worth of $35 million. As of June 2019, Singh announced his retirement from cricket. He played as a batsman. Singh is known for his athleticism on the field and left-arm spin. One of Singh’s career highlights came during the 2011 World Cup. He scored 362 runs, 15 wickets, earned “Player of the Tournament,” and earned four “Man of the Match” awards. Despite struggling with some health concerns in 2012, he continued to persevere as a successful cricket player until his retirement in 2019.

Shane Watson is a former player for the Australian national cricket team who has a net worth of $35 million. As of July 2014, Watson announced his retirement from the Australian Big Bash League. He is an allrounder when playing cricket. Watson can handle spin and pace and is known to have a power game. He initially began his international career in the middle order until he got promoted to being an opener. Watson had a successful international career, especially with limited-overs cricket.

Chris Gayle is a Jamaican cricket player with a net worth of approximately $25 million. He has played internationally for the West Indies cricket team since 1999. Gayle has had an extremely successful career in both international and domestic cricket, and was named to the ICC T20I Team of the Decade in 2020.

Anil Kumble is a retired Indian cricket player with a net worth of approximately $11 million. He was a key member of the Indian national cricket team for 18 years from 1990 to 2008. Kumble was a highly successful bowler both domestically and internationally, taking 619 wickets throughout his Test cricket career. He was a master of the leg spin technique, which contributed to his dominance in the sport.

Is cricket really popular in India?

Cricket is a highly popular sport in India and is played and watched all over the country. Fans are dedicated to cricket and the players. Although they are extremely successful cricket players, they are also very popular public figures. Their significant popularity has helped gain them large sponsorships with large companies within India and overseas. Their popularity has also helped establish the players’ high net worth.

How is Virat Kohli the highest paid cricket player of 2020?

Although Virat Kohli does not have the highest net worth, he is the highest-paid cricket player of 2022. He earns approximately $26 million annually through his salary and endorsements. Kohli's sponsors include Google, Audi, Flipkart, Puma, Hero, and Colgate-Palmolive. Compared to Sachin Tendulkar and M.S. Dhoni, Kohli is considered young and hopefully has a long cricket career ahead of him.

How are cricket salaries distributed?

Usually, cricket players’ salary figures are based on international cricket and do not account for any earnings from T-20 leagues or other domestic endorsements. Cricket boards from various countries distribute commercial rights differently and, in some cases, do not distribute them at all. However, due to higher cricket salaries in recent years, this has accounted for a higher inequality among players.