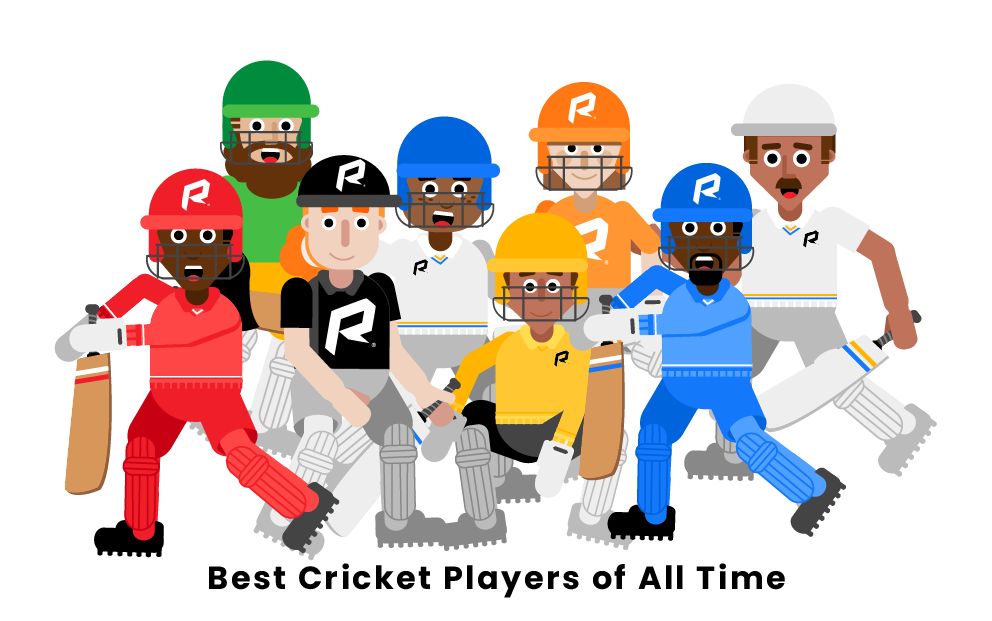 Cricket can be one of the most fast-paced and exciting sports to watch in the world. Bowlers launch a ball toward batsmen who attempt to hit it, and once the ball is in play, the action really begins. There are two main forms of cricket: test matches, which last five days and are considered the highest form of the sport; ODI (One Day International) matches, or games that are shortened to last just a single day. There are a number of different positions a cricket player can occupy, and being great at any one of them requires talent along with a lifetime dedication to the game. To learn about the 10 greatest cricket players of all time, keep reading below.

Who are the best cricket players of all time?

Without a doubt, Don Bradman is the greatest batsman the sport has ever seen. His ability to hit the ball was second to none, and he still holds many records that some cricket fans consider unbreakable. His career batting average of 99.94 is absurdly high and by far the best of any cricket player ever. To put that feat in perspective, the next-best batting career batting average in the history of cricket is 61.87. Though that record will surely last forever, his list of accomplishments doesn’t stop there. Bradman also set the record for most runs scored in a single day at a test match, recording 309 runs against England in 1930; he was also the fastest batsman ever to reach 6,000 runs in test matches, doing so in just 68 games. Bradman was captain of the Australian national team and helped keep the Aussies atop the world ranks for much of his career, spanning from 1928 to 1948.

Though Bradman may have a few unbeatable records, no one in cricket history comes close to Sachin Tendulkar when considering the impact one player had on the game. Tendulkar played from 1989 to 2013 and put cricket on the international sporting map. His absolute dominance was routinely on display, as he became the most prolific run-scorer in the game’s history. Despite having enormous expectations placed on him as a teenager, Tendulkar lived up to the hype and more, drawing more fans to cricket than ever before. He scored over 15,000 runs in test matches, the most of all time, and also scored 51 hundreds in test play. Tendulkar was not just supremely talented, he was also extremely durable. His 200 test matches are the most games played of any cricketer ever, and his longevity was something to marvel at.

When it comes to cricket players, there was perhaps no one more polarizing than Muttiah Muralitharan. Playing with a big personality and a right arm like no other, Muralitharan was arguably the greatest bowler to ever play the sport. He could turn the ball in any direction he pleased, and he often left batsmen stumped or looking lost. Muralitharan holds a number of records for his career, but easily his most impressive is that he has bowled the most balls of any cricketer ever in test matches, tossing over 44,000 throws over the course of his career. Muralitharan was also a winner on an international level, leading Sri Lanka to a Cricket World Cup win in 1996 and taking them back to the final in 2007, when they lost to Australia. He was also awarded the Player of the Series award 11 different times in test matches, the most of any cricketer ever.

Viv Richards was one of the most intimidating batsmen of his time. He was fearless when hitting and had a knack for knocking opposing bowlers off their game. His power was among the best in the sport, and he used that ability to score a multitude of runs during his career. In 1976, he recorded 1,710 runs, the second-most runs scored ever in a single year of test play. That same year, Richards had seven hundreds, good for the third-most in a year of all time. He was nicknamed “The King of Sixes” for his ability to hit boundary sixes, or instances where the ball is batted over the boundary on the fly. Richards was also one of the most successful international cricketers of all time, as he was an integral part of the West Indies World Cup teams from 1975 to 1983. Those teams repeated as World Cup winners in 1975 and 1979 before making a third straight title appearance in 1983, only to lose to India.

Brian Lara was one of the most interesting figures in cricket when he played. At his best, Lara was seemingly the greatest player to ever grace the pitch, with former President Barack Obama dubbing him “the Michael Jordan of cricket.” However, Lara also dealt with a number of injuries due to weight problems and is perhaps the most infamous captain in the sport’s history. He tried his best to carry his West Indies teams to victory but often came up short. There was no doubt that Lara was an incredible batsman, as his 400 runs scored against Antigua in 2004 remain the most of all time by a captain, yet his teams never quite reached the top of international play. His most telling and dubious record might be his mark of 351 runs scored in a loss, the most runs ever recorded by a player in a losing effort. Lara was removed and then reinstated as the West Indies’ captain three times, and he retired as one of the greatest cricketers ever.

Though many sports fans may not think of cricketers in the same light as footballers or basketball players, Shane Warne put that reputation to rest. The constant subject of international media and tabloids alike, Warne was one of cricket’s biggest stars in the 1990s and early 2000s. He is regarded by many as the greatest bowler in the history of the sport, and he certainly has the accolades to back that title up. He bowled over 40,000 balls in test matches in his career, the third-most all time, and was also the second-fastest bowler to collect 700 wickets in test play, doing so in 144 games. Though he never captained Australia’s national team, Warne was still routinely recognized as the best player on the pitch, winning 17 Player of the Match awards during his illustrious time as a cricketer. He was an integral part of the Australian teams that won three straight World Cups from 1999 to 2007, and he will forever be remembered as a legend of the sport.

During his time as captain of the South African squad, Jacques Kallis defined what it meant to be a team player. Though not the flashiest or most outspoken cricketer ever, Kallis was undeniably gifted as a leader and an all-around player. It’s fitting that he has won the most Player of the Match awards ever with 23, but Kallis also drove his way to the top of the leaderboard in many different categories. His 13,289 runs are the third-most ever scored in test matches, and he hit the fifth-most sixes in his career with 97. Kallis was a physically-imposing player on the pitch, but he also displayed a high level of grit and tenacity that won him the respect of his teammates. In addition to being a great batsman, Kallis was also an exceptional fielder, moving very well for his size and often making great plays.

One of the best players of the modern cricket era, Kumar Sangakkara, was truly exceptional at everything he did. As a wicketkeeper, Sangakkara had a way of distracting opposing batsmen, and when he had a bat in his hand, he often did significant damage. Sangakkara tied the record for the fewest games needed to score 10,000 runs in test matches in 2012 when he reached the mark in his 195th appearance in front of the largest crowd for which he and Sri Lanka had ever played. Alongside Muralitharan, Sangakkara helped lead Sri Lanka to consecutive World Cup finals appearances in 2007 and 2011, ultimately losing to Australia and India, respectively. His 16 Player of the Match awards are the fifth-most ever, and he is also tied for the record of consecutive fifties, posting seven innings of 50 runs or more in a row during the 2014 season.

When it comes to winning, Ricky Ponting is undoubtedly one of cricket’s best of all time. He captained Australia’s national team from 2002 to 2011, leading them to two World Cup wins, and was also a member of the 1999 national team that won a World Cup title. Ponting holds the second-longest streak of captaincy ever in cricket, leading Australia’s team in test play for 73 consecutive matches. Individually, Ponting was equally as impressive. His 168 test matches played are the third-most in the sport’s history, and his 13,378 runs are the second-most of any player in test matches. Ponting was also remarkably consistent, notching 103 fifties in his career, the second-most of any player in test matches. Ponting was the second-fastest player to reach the 12,000 run mark in test play, doing so in 247 matches, and he also has the fourth-most catches in the category with 196 for his career.

Regarded by many as the greatest left-handed bowler in cricket’s history, Wasim Akram was one of many in the great line of legendary Pakistani cricketers. His ability to spin the ball in any direction while also bowling with a super-fast delivery often overwhelmed batsmen, and he routinely dominated the opposition when he was bowling. However, Akram was also a terrific batsman himself, posting a number of records with a bat in his hands. His 12 sixes against Zimbabwe in 1996 remain the most ever in a single test match, and his 257 runs scored as a mid-wicket player in that same match are the most by any batsmen in position eight. Akram won 17 Player of the Match awards during his test play career and was also the ninth-fastest bowler to take 400 wickets, doing so in 96 matches.

Who is the best cricket player of all time?

The best cricket player of all time is Don Bradman. Though he may have played long ago, Bradman’s talent was undeniable, and his ability as a batsman was the greatest the sport has ever seen. His career batting average of 99.94 is the highest of all time by more than 37 points, as he was an unstoppable force with the bat. Bradman also set the record for most runs scored in a single test match with 309.

Who has won the most cricket championships?

There are a number of players with three cricket World Cup wins, but the most notable is Ricky Ponting. Ponting was already an outstanding player when Australia won the World Cup in 1999, but he wouldn’t become team captain until 2002. After that, he led his team to consecutive World Cup titles, helping Australia three-peat as world champions. Ponting holds the record for the most matches as captain in ODI play and is second of all time in matches captained in test play.

Pages Related to Top 10 Best Cricket Players of All Time