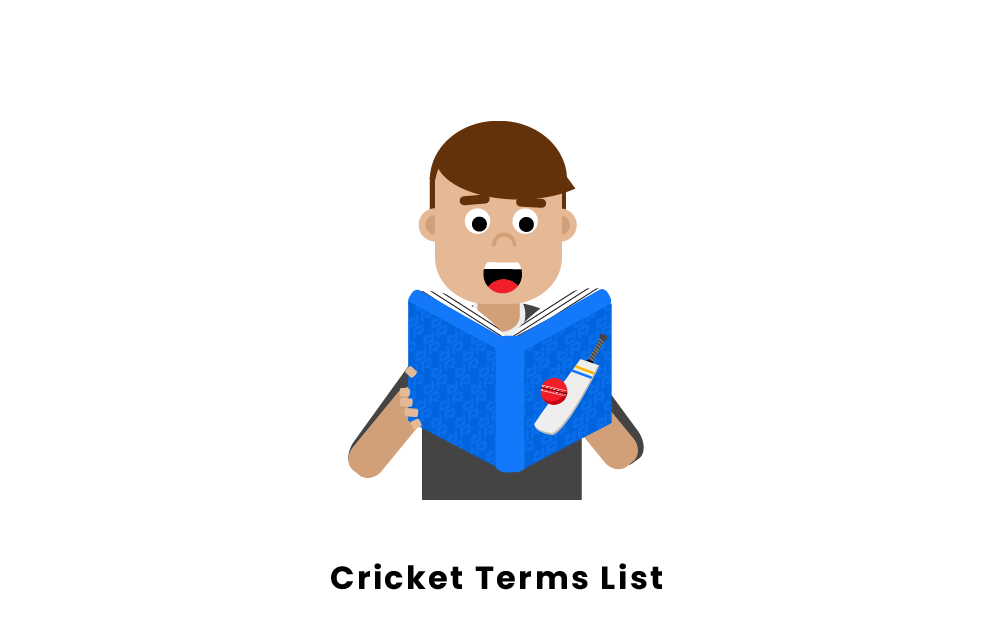 Although cricket is often compared to baseball, the sport has its own set of rules, traditions, and quirks. As a result, cricket lingo can often seem like a massive jumble of words without much meaning! Never fear though, because we’ve got you covered. If you want to learn about wickets, overs, and googlys, then you’ve come to the right place.

The Ashes: The Ashes is the traditional cricket match played between England and Australia about once every two years. It is called the Ashes because the victor is awarded a storied urn containing the metaphorical ashes of the losing team.

Bail: The smaller stick placed on top of the stumps to form the wickets. A batsman that is trying to score a run is out if the bail is knocked over before they reach the crease, and a delivered ball that successfully knocks over the bail also results in an out.

Batsmen: The batsmen are the offensive players in each innings, who try to score runs by running up and down the pitch. The batsman is the player who is currently up to bat.

Boundaries (Field): On the field, boundary refers to the marked outermost edge of the field of play.

Boundaries (Runs): A boundary is also a way to score a run. A ball that is hit beyond the limits of the field of play is called a boundary, and depending on how the ball clears the field, it awards either four or six runs to the batting team.

Bowler: The person who is bowling the ball towards the wickets against the batsmen.

Bowled: One of a few ways in which a batsman may be called out. If the bowler delivers the ball into the wicket and knocks the bail onto the ground, the batsman has been bowled and is declared out.

Bouncer: A ball that is delivered in a manner that makes it bounce high towards the batsman’s head is called a bouncer.

Bunny: Also called a rabbit, a bunny refers to a batsman that is particularly bad at batting. Usually, a bunny is a skilled bowler, whose pitching skills outweigh their terrible offensive capabilities.

Bye: A bye is a run that is scored without the ball making contact with the bat or the batsman.

Caught: Caught or catch refers to a type of out in which a fieldsman catches the ball without it ever having touched the ground.

Cover: A cover is one of the fielding positions in cricket. A cover is an infieldsman with a high degree of agility that is positioned on the off-side of the batsman.

Crease: The crease is a series of lines that form a box around the wickets. The bowlers and batsman must stand inside of the crease during each delivery and hit. The crease is somewhat similar to the batter’s box in baseball.

Doosra: A doosra type of delivery that results in the bowled ball breaking away from the batsman after it bounces on the ground. It is used to catch the batsman off-guard.

Duck: A duck is a score of zero from a batsman.

Extra: A run that is awarded from any means other than the batsman contacting the ball with their bat is called an extra.

Extra Cover: An extra cover is a fielding position in which the player is stationed in the infield between the cover and the mid-off.

Fine Leg: The fine leg is a fieldsman that lies either at the edge of the infield or in the outfield, behind and to the right of the wicket keeper.

Fieldsman: The fieldsmen are the defensive players that protect the field of play while the other team bats. They try to get the batsmen out by catching the ball or fielding and throwing the ball towards the wickets.

Four: A four is a type of boundary that results in four runs being awarded to the batting team. A ball hit outside of the field of play after first bouncing inside the field is a four.

Googly: A googly is a breaking ball that when delivered by the bowler breaks towards a right-handed batsman or away from a lefty.

Gully: The gully is a close-infieldsman that lies between the slips (directly to the left of the wicket keeper) and the point (in the middle of the pitch).

Handling the Ball: When a batsman touches the ball with their hands, they have handled the ball, and may be declared out by the umpire.

Infield: The second ring of the field of play. It comprises the area of play between the outfield and the pitch, and most of the fieldsmen are stationed somewhere within the infield.

Leg-Before-Wicket (LBW): An LBW is a form of out that occurs when the batsman is hit by the ball, causing the ball to deflect away from the wicket when it otherwise would have struck the stumps.

Leg-Side: Leg-side refers to the half of the field that is close to the current batsman. When a right-handed player is up to bat, the leg-side is the right half of the field from the perspective of the bowler.

Maiden (over): A maiden over is an over (series of six deliveries) in which no runs have been scored against the bowler.

Mid-Off: The mid-off is a fieldsman at the back edge of the infield who stands just to the off-side behind the bowler.

Mid-On: The mid-on is a fieldsman at the back edge of the infield who stands just to the on-side behind the bowler.

Midwicket: The midwicket is a fieldsman in a similar position the mid-on, but closer to the center of the pitch and roughly in-line with the bowler.

No-Ball: A no-ball refers to an illegal delivery by the bowler - usually because the bowler has stepped over the crease - and results in a run being scored for the batting team.

Off-Side: Off-side is the opposite of leg-side, and is the half of the field that is away from the batsman. For a right-handed batsman, it is the left side of the field from the perspective of the bowler.

Out: A batsman that is out is no longer an active player, and cannot score a run. There are ten different ways to get out, and the objective of the bowler and fieldsmen is to get as many players out as possible during each innings.

Outfield: The outfield outermost field of play that runs from the edge of the infield to the boundaries.

Over: An over (similar to an “at-bat” in baseball) is a series of six consecutive deliveries by a single bowler at the same side of the pitch. After each over a different player must become the bowler and the new bowler delivers to the other end of the pitch.

Point: The point is a fieldsman that lies parallel to the batsman, either at the outer edge of the infield or in the outfield (called a deep point). The point can also be just behind the batsman as well, called a backward point.

Rabbit: A rabbit is another name for a bunny - a player who is particularly bad at batting but has superb bowling skills.

Run: In cricket, each point is called a run. There are several ways to score a run, with the most common occurring every time a batsman hits the ball and then successfully runs from one wicket to the other.

Run-Out: One of the ways in which a batsman may get out. A batsman is run-out when they are attempting to score a run, but fail to reach the crease before the stumps are broken and the bail hits the ground.

Six: A six is a type of boundary that results in six runs being scored. A ball that is hit outside of the boundary without ever touching the ground is called a six.

Slip: The slip is a fieldsman that is very close to the batsman, lying next to the wicketkeeper on the off-side. There may be several slips during some deliveries, or there may be none, all depending on the current gamestate.

Straight Boundary: The straight boundaries are the long ends of the cricket field, and are the boundaries that lie behind the wickets.

Stumps: The stumps are part of the wicket. A wicket has three stumps that stand vertically on the ground, and the bail is balanced on top of the stumps.

Square Boundary: The square boundaries are the short ends of the cricket field, making up the sides of the field of play.

Square Leg: The square leg is a fielding position that is stationed in the outfield or just on the edge of the infield along the square part of the field on the leg-side.

Third Man: The third main is a fieldsman positioned behind the batsman in the outfield.

Twelfth Man: The twelfth man is a reserve player, who can come on if another player is injured or incapacitated.

Wicket: The wicket is one of the main parts of a cricket field. It can either refer to the area between the two sets of stumps, or the stumps and bails themselves.

Wicket Keeper: The wicket keeper is the fieldsman that stands directly behind the batsman during deliveries. They are similar to a catcher in baseball.

Wide Ball: A bye that occurs whenever the bowler delivers a ball that is so wide of the wickets that it is unhittable. The result is an extra, and the ball is bowled again.