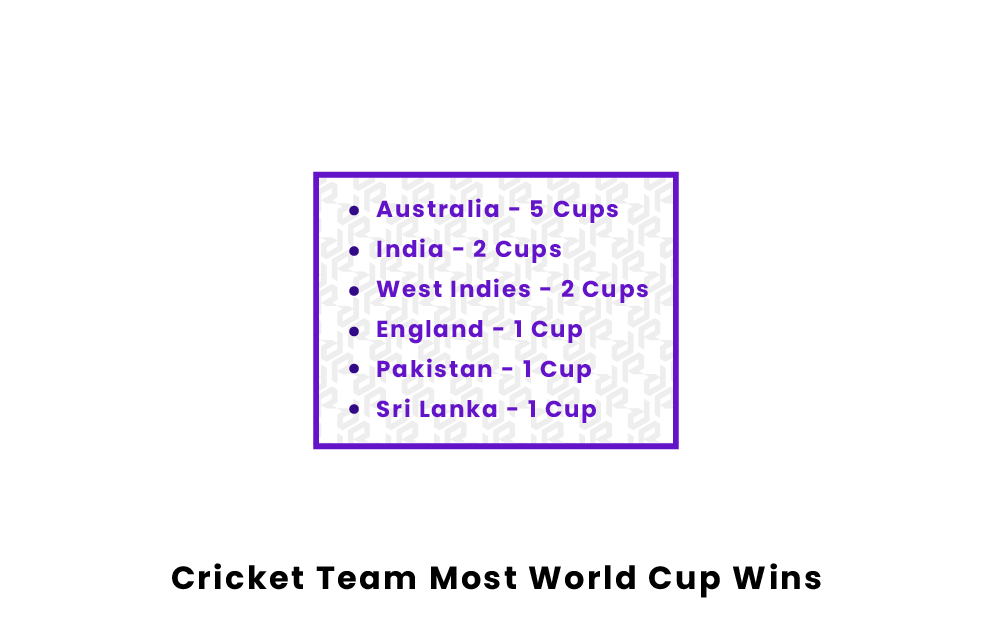 The Cricket World Cup has been around since 1975, and in its history, there have been six different teams to win it all. With matches lasting multiple days and competition being fierce around the world, becoming World Cup Champions is far from easy, but some countries have managed to do so a number of times, etching themselves in the history books. To learn more about these teams and their wins, keep reading below.

Which Cricket Teams Have Won The Most World Cups?

Australia is by far the most dominant country when it comes to international cricket. Their national team has captured five World Cups in the history of the competition, the most of all time. They lost the first-ever World Cup in 1975 to the West Indies, but they came back with a vengeance. They defeated England in 1987 to earn their first championship, and their most successful stretch was yet to come. From 1999-2007, they won three straight World Cups, a record in the history of the event. The team came back in 2015 to take down New Zealand in a tightly-contested match for their fifth World Cup title.

When many fans think of cricket, they think of India, and the country has certainly produced some of the best talent in the game. Tied for the second-most World Cups all-time with two, India’s national teams have always been in the thick of the competition. Their first win came in 1983, in what was considered a shocking upset over the two-time defending champion West Indies team, but for a while after that, they fell into the background. In 2003, India made it back to the World Cup, only to lose to Australia. However, the team returned in 2011 to win their second title against Sri Lanka.

When the Cricket World Cup was first introduced, the West Indies were the team to beat in international play. Their roster consists of 15 different Caribbean nations, including islands like Jamaica, Trinidad and Tobago, and the U.S. and British Virgin Islands. They won the first-ever World Cup in 1975 and came back in 1979 to repeat as champions. They returned in 1983 looking to become three-time champions, but they suffered what many considered an unforeseeable defeat at the hands of the Indian national team. Since then, the team has not returned to the World Cup.

One of three nations with one Cricket World Cup win, England had to be very patient for their first title. They made it to the World Cup in 1979, only to lose to the West Indies, but they didn’t stop there. They made back-to-back appearances in 1987 and 1992, only to lose both times. Finally, in 2019, the team made its fourth World Cup run, and this time they were successful in winning it all, defeating New Zealand after being tied following the conclusion of regulation play.

One of the best cricket nations of the 1990s, Pakistan is tied for fourth all-time with one World Cup win. They made it to the finals in 1992 and defeated England, and they also made a run to the championship match in 1999, though they lost to Australia. Still, the Pakistan national teams of that decade were seen as among the best in the world.

Following Pakistan, Sri Lanka became a force to be reckoned with in the late nineties and early 2000s. They actually won their first and only World Cup in 1996, sandwiched between Pakistan’s finals appearances, but Sri Lanka would go on to have more success. They made it to the championship in back-to-back World Cups from 2007-2011, but they were unable to take down the Australian juggernaut team in 2007 and lost to India in 2011.

Which player has won the most cricket World Cups?

The player with the most cricket World Cup wins in history is Ricky Ponting, with three. Ponting competed for the Australian national team from 1996-2007 and was part of their historic three-peat run. In addition to winning three World Cups, Ponting also holds the record for the most matches played in World Cup history with 46. He was captain of Australia’s team between 2004 and 2011.

What is the record for most World Cup appearances without a win?

New Zealand holds the record for most World Cup appearances without a win at two. Owners of an unfortunate record, the New Zealand National Team has made it to the World Cup finals twice, only to lose both times. However, there is hope for the country, as they are a team on the rise. Their two appearances have come in each of the past two World Cups in 2015 and 2019, and in their most recent championship match, they were tied with England in regulation play and super over play, only to lose due to hitting fewer boundaries than England.