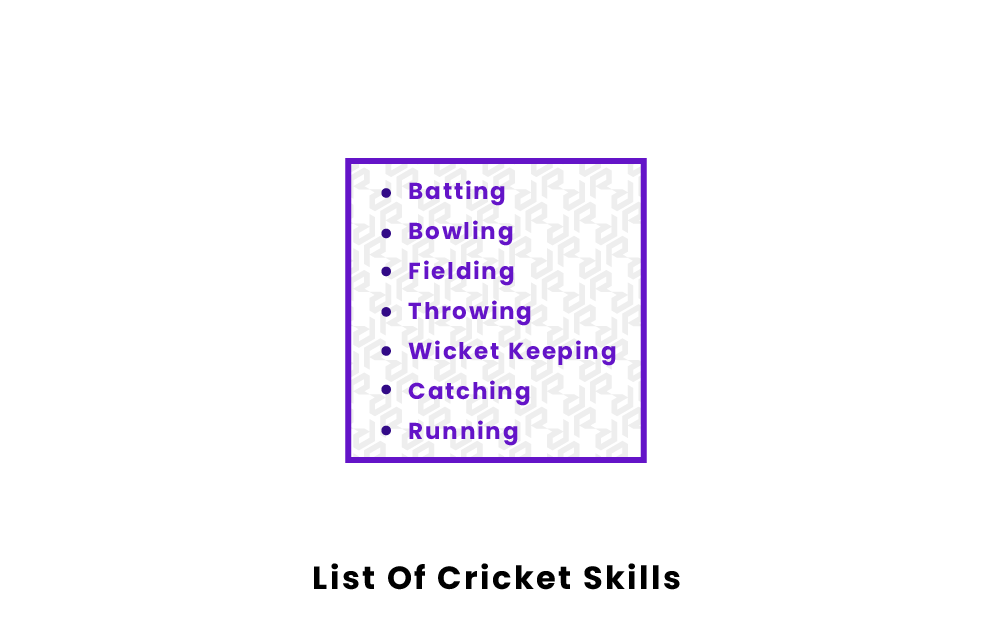 Cricket is one of the most popular sports worldwide. It is also one of the most technically difficult sports to play. There are a lot of skills required to play cricket well. The most basic skills involved in cricket are batting, bowling, catching, and throwing. However, there are other smaller skills that are involved in playing cricket, especially at a higher level, where the sport gets even more detailed and technical.

Below is a list of the most important skills needed for cricket:

In cricket, the only way to score runs is by batting. Batting involves protecting the wickets and being able to hit balls for multiple runs. It takes a lot of skill for a batsman to be able to know when to swing and what kind of swing to use, which depends on the situation.

The first step to becoming a competent batsman is learning how to hold the bat correctly. The most popular way of holding a cricket bat is the v-grip, in which you use your thumb and the rest of your fingers to form two “v’s” when gripping the bat.

As a batsman, you will also need to have good hand-eye coordination and a good swing. As with many other sports, constantly practicing these skills will help you to become a better batsman.

If batting is the way to score runs, bowling is the way to prevent runs. The bowler is the most important player on defense in cricket because they are the ones touching the ball every bowl and trying to get the batsman out. Bowling is very physically taxing, especially on the shoulder. It's a highly specialized skill not required for other sports, but it is key to cricket.

The move is so technically difficult that you’ll want to start slow when first practicing. As you build up flexibility and strength, you will be able to incorporate a run-up as well as increase the speed and spin of your bowling.

The other defensive players who aren’t bowling have an important role to play as well. As fielders, their job is to catch any ball in the air and stop the ball from reaching the boundary to prevent as many runs as possible. Fielding is complex, involving catching, throwing, and running. However, an underrated part of fielding is positioning. Knowing where to stand is an important part of being able to field on a cricket pitch.

Throwing is the second part of fielding (after catching). Throwing is a crucial skill for any field player in cricket. By throwing to another player or hitting the wickets directly, a good throw can be the fastest way to get a batsman out. This is a skill that cricket players may not use often, but the best fielders practice this skill so that they can use it whenever they have the opportunity. This small skill can make a huge difference in a game’s tide.

Wicket-keeper is just one of the positions on the field in cricket. However, some skills involved in being a wicket-keeper are different from the other fielders. Playing wicket-keeper involves squatting while wearing some protective equipment. It also requires elite hand-eye coordination in order to catch the very fast bowls and the possible deflections off of the batsman’s bat.

Both fielders and wicket-keepers need to be able to catch the ball if it comes to them. The intense velocity of a competitive cricket game only adds to the need and difficulty of consistently catching well. For this reason, most players take part in rigorous catching drills during practice sessions to keep this skill as precise as possible.

Running between the wickets is a very important part of scoring runs in cricket. Increasing basic cardiovascular fitness will thus improve anyone’s cricket game. Knowing when to run and when not to, particularly on shorter hits, is also crucial. Running is especially important while on defense, as reacting to batted balls requires significant and accurate movement. Sometimes being just a hair faster can prevent a run from being scored.

What are the basic skills in cricket?

The most basic skills in cricket are batting, bowling, fielding, throwing, wicket keeping, catching, and running. Batting is the key to scoring runs in cricket. Becoming a proficient bowler, fielder, wicket-keeper, thrower, and catcher will help your team limit the number of runs scored by the opposition. Being a fast runner will help you on offense to score runs and on defense to limit runs by chasing down batted balls.

How do you hold a cricket bat?

The most common way to hold a cricket bat is by using the v-grip. The v-grip is characterized by the shapes made by both hands. The thumbs and index fingers make a “v” shape. To use a v-grip, lay the cricket bat face-down on the ground and make the v-shape with both hands, dominant hand over non-dominant hand. Then simply grab the bat and wrap the rest of your hand around it, maintaining the v-shape made by both hands.

What are common attributes of a good cricket player?

A good cricket player needs great hand-eye coordination, good reflexes, strong cardiovascular fitness, a high running speed, solid core strength, and an ability to make quick decisions in-game. Cricket is a fast-paced game with many moving players and parts, so players will be most successful if they have the strength and ability to move fast and adapt well against the opposing team.