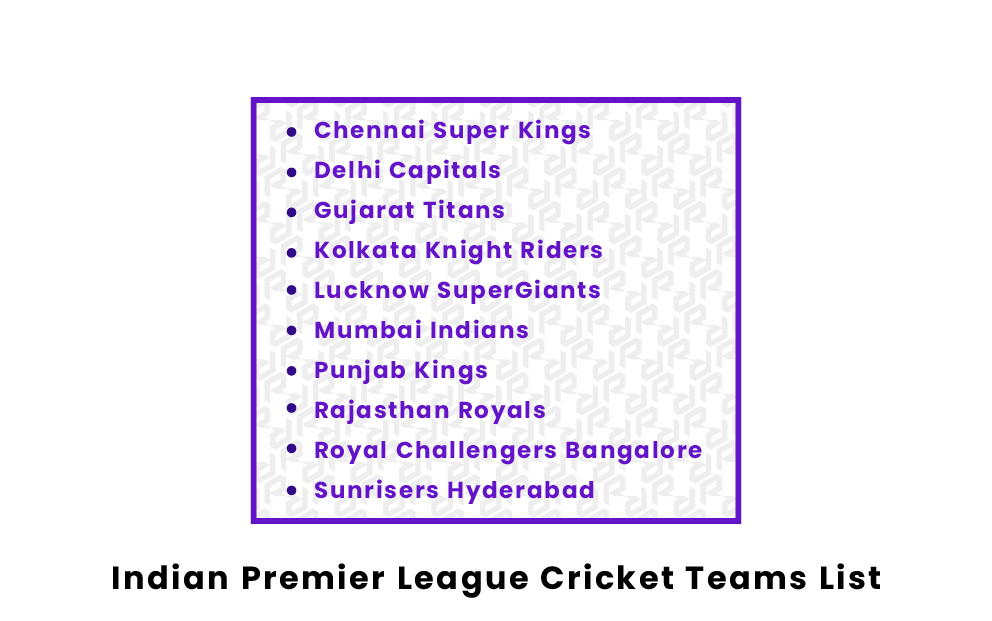 The Indian Premier Cricket League was founded in 2008 and follows the T20 rules of play. The IPL has teams in most major Indian cities and is known as the most popular league for the sport. The winner of the championship game will hold the IPL title.

What Teams Are In The Indian Premier League?

Initially dubbed “Dad’s Army,” the Chennai Super Kings (CSK) are considered one of the top teams in the IPL. The nickname came about during the 2008 season when nearly all of their players were over 30 years old. Since then, they have won four IPL titles under the leadership of MS Dhoni, who was one of the highest-paid cricket players at the founding of the IPL. They have qualified for the playoffs every year since 2008, excluding 2020. Their coach is Stephen Fleming, and he, along with Dhoni, has often been praised for the CSK’s victories. The team was suspended in 2016 and 2017 due to match-fixing and betting. They have won championships in 2010, 2011, 2018, and 2021, and have been runners-up in 2008, 2012, 2013, 2015, and 2019.

Formerly known as the “Delhi Daredevils,” The Delhi Capitals have been known as the underdogs of the IPL, and until 2021, it seemed a fitting reputation. The Capitals have several key players, the most famous being Shreyas Iyer, who completed 2,375 runs in only 87 games during his time on the team. Their coach is Ricky Ponting, and their captain is Rishabh Pant, who is the highest scorer in the team’s history, with 2,838 completed runs and a strike rate of 147.96. While the Capitals have made the playoffs many times, they have yet to win a championship; their highest ranking was runner-up in 2021.

The Gujarat Titans hit the ground running, becoming the second team to win the IPL Championships during their first season. They are owned by CVC Capital Partners and chose Hardik Pandya as their starting captain. Pandya, a former Mumbai Indians player, was given $1.5 million dollars to play for the Titans. While playing for the Titans, he had a strike rate of 130 and made 487 runs. Their head coach is Ashish Nehra, a renowned bowler who played for the Indian international team.

One of the league’s most popular teams, the Kolkata Knight Riders (KKR) are owned by Bollywood stars Shah Rukh Khan and Juhi Chawla as well as Chawla’s husband, businessman Jay Mehta. At the team’s founding in 2008, KKR should have been a force to be reckoned with. With renowned players such as Ricky Ponting, Chris Gayle, and Shoaib Akhtar, the KKR was projected to place highly, but their highest ranking was sixth during their first three years. Aside from their starting team, players such as Gautam Gambhir, who is the all-time scorer for KKR with 3,345 runs, and Robin Uthappa are credited as being instrumental in the Knight Rider’s two championship wins, once in 2012 and again in 2014. In 2021, they were runners-up to the Super Kings.

The second of two teams added in 2022, the Lucknow SuperGiants, or LSG, qualified for the playoffs in their first season. They had nine wins at the end of the group stage, with standout players KL Rahul (formerly of the Punjab Kings), Quinton de Kock (formerly of the Mumbai Indians), and Deepak Hooda (formerly of the Delhi Capitals) credited with many of the victories. Rahul, the founding captain, is the joint-highest-paid IPL player. In the 2022 season, Rahul was the second-highest scorer. Their founding coach, Andy Flower, was a former batter for Zimbabwe and formerly coached for England. In 2022, LSG placed fourth.

The most successful team in the IPL, the Mumbai Indians were also the most expensive team in the league at the time of their founding. Their starting team was comprised of Sachin Tendulkar, the face of the team as well as the leading scorer until his retirement in 2013, and Sanath Jayasuriya, who first led the team to the championships in 2010, where they finished as the runners-up. Other players such as Lasith Malinga, the joint leading wicket-taker in the IPL, and captain Rohit Sharma, the team’s star batter, are a vital part of the team’s five championship wins. The Indians won in 2013, 2015, 2017, 2019, and 2020 and were the runners-up in 2010.

Considered one of the most inconsistent teams in the IPL, the Punjab Kings were formerly known as the Kings XI Punjab. In 2010, the team was expelled from the league due to discrepancies in ownership. The team returned to the IPL in 2011 but lost many players in the auction. After changing their name in 2013, it appeared that their luck had changed, with the team reaching the finals in 2014, where they were the runners-up. Before switching to the SuperGiants, KL Rahul was the leading scorer for the team and was formerly captain of the team during the 2020 and 2021 seasons. Shaun Marsh gathered about 2,500 runs during his time with the Kings. Aside from their near win in 2014, the highest the Kings have placed was in 2008, when they placed third.

Initially an unpromising team, the Rajasthan Royals surprised many cricket fans when they won the opening season of the IPL. The Royals have been known to be conservative with their selection of new players, choosing to recruit lesser-known players and providing them a space to build a reputation in the world of cricket. Shane Watson, who was awarded player of the tournament in 2008, continued to be the Royals’ highest wicket-taker until his retirement in 2020. Another lesser-known talent, Ajinkya Rahane, became the team’s top scorer during his tenure, scoring 3,098 runs in 106 matches. The team was suspended during the 2016 and 2017 seasons due to fixing and betting alongside the Super Kings. After their initial win in 2008, the Royals have yet to reach the finals again.

The Royal Challengers Bangalore are known for spending large amounts on players and dropping them when the player is not considered useful. A fan-favorite team, the Challengers have yet to win a title. Despite the inconsistencies in players, the Challengers kept Virat Kohli as captain until the 2021 season. Kohli was also the highest-paid cricket player in the history of the IPL.  Initially, the team was owned by Vijay Mallya, but it was bought by Diageo India in 2015. The Challengers have yet to win a championship but have been runners-up in 2009, 2011, and 2016.

The Hyderabad Sunrisers took over for the Deccan Chargers in 2013 after being bought by Sun TV. Despite the new team, over 20 players from the previous team stayed on with the Sunrisers. Their star bowler, Dale Steyn, took 19 wickets in 17 games, resulting in several wins for the team. After Steyn, the leading wicket-taker for the Sunrisers from 2014 to 2017 was Bhuvenshwar Kumar, who won the Purple Cap in 2016 and 2017. Their team song, “Orange Army,” is one of the most well-known team songs in the IPL. The Sunrisers have one title under their belt, which they won in 2016, and were runners-up in 2018.