How Does Scoring Work In Cricket? 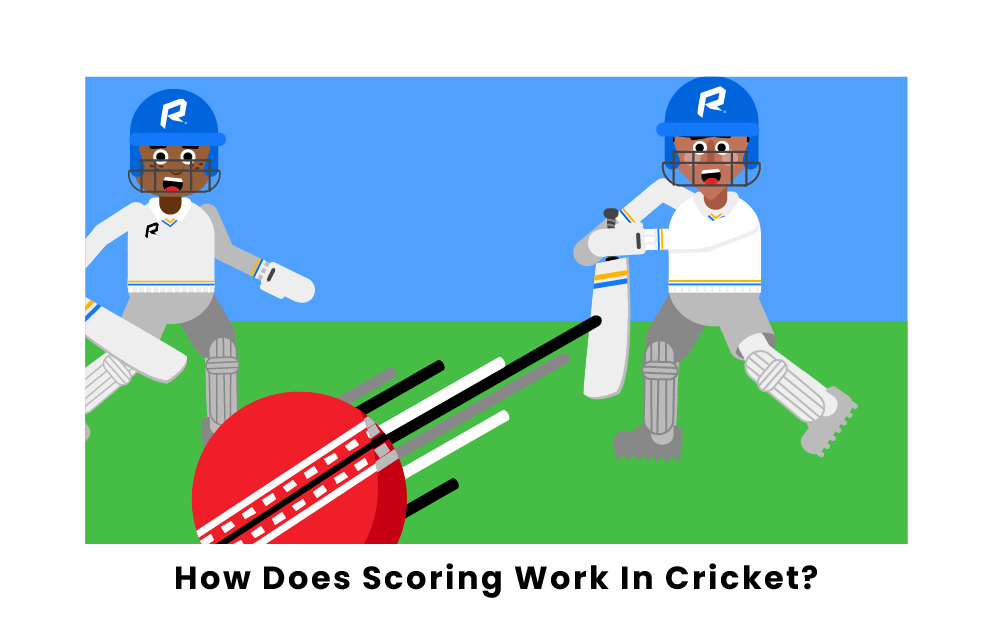 In cricket, scoring depends on the number of runs scored and wickets taken (known as outs). On the pitch, a wicket is a set of three sticks/stumps with two wooden bails on top. Each team takes turns to bowl and bat. When a team is batting, they attempt to score as many runs as possible.

Once the batsman hits the ball, especially to an empty or remote part of the field, they may wish to run between the wickets to score runs. There is a batsman on each end of the pitch, and they will each run from their end of the pitch to the other end. If they successfully reach the other end of the pitch without the fielding team striking them out, one run is added to the total score. This run will also count towards the batsman’s (who hit the ball) individual score.

Different cricket games have different lengths, depending on the type of tournament being played. For example, if a game is 20 overs (1 over = 6 balls) long, there will be 120 balls. The team must try to score as many runs as possible within those balls, and then they will switch sides. Another scenario is the batting team might have ten outs (wickets) before completing the overs and must switch sides then too. In the end, usually, the team with the highest number of runs wins.

In cricket, extras are ways in which additional runs can be scored by the batting team. One extra run is given to the batting team if the ball goes wide (it is too far from the batsman to be reasonably hit when it passes them). If there is an illegal delivery from the bowler, a “no ball” is declared, and one or two extra runs are given to the batsman.

Extra runs are also added to the team’s score if a batsman is able to complete runs without hitting the ball or if the ball makes it to the boundary without being hit. These added runs are called “byes.” The last type of extra is a “leg bye,” which is when the ball hits a part of the batsman’s body after they’ve made an attempt to hit the ball. All extras are up to the umpire’s discretion.

Penalty runs are a type of extra that is awarded as a result of a rules infraction by the opposing team. Penalty runs are typically assessed in the amount of five runs and punish unfair play or unsportsmanlike conduct. Penalty runs can be awarded to either the batting or fielding team, depending on the infraction. Common infractions punishable by penalty runs include wasting time, distracting or obstructing the batsman, tampering with the ball, and illegal substitution.

Cricket game officials are known as umpires, and each game of competitive cricket features two of them. The two umpires are in charge of different positions on the pitch, with one standing behind the stumps and at the bowler’s end and the other monitoring the square leg.

Cricket umpires are tasked with a variety of different tasks, such as making decisions on whether or not a no-ball has occurred, various instances in which a bye could be awarded, and the boundaries of the pitch. These sorts of decisions are extremely important to the score of a cricket game, and umpires will switch positions on the field after each over to ensure fairness and prevent bias from playing a large role in the match. Umpires are also occasionally tasked with utilizing the Umpire Decision Review System when players challenge their decisions.

Cricket is a bit different from most sports when it comes to overtime. In fact, most cricket games are allowed to end in a draw. For games that require a winner, such as in international tournaments, an additional period known as a “super over” is used to decide the winner. Super overs are the primary way in which ties are broken in limited-overs cricket. In a super over, each team plays another set of six deliveries (one over), and whichever team scores the most runs wins. As of 2019, if the score remains tied after the first super over, a second will be played. This tie-breaking method is mainly used in ODI and T20 cricket matches.

How do you score in cricket?

Scoring in cricket requires the batting team to make runs and the fielding team to collect wickets. When the batsman hits the ball, they usually make one, two, four, or six runs. One or two runs are made when the current batsman and the second batsmen run from their respective ends of the pitch to the other end without getting out. Four runs are scored when the ball hits the boundary line. When the ball is hit over the boundary line, that is six runs.

What is a good score in cricket?

A “good score” depends on the type of game played and how many overs there are. In a Twenty20 game, one batsman scoring 50 runs is considered impressive. But if the game has a higher number of overs, the score would increase as well. A good score in Test Cricket is over 500 runs. A good score in One Day International is over 300 runs. Teams should try to minimize the number of wickets they have to ensure a higher chance of winning.

What is a wicket in cricket scoring?

A wicket is considered an “out” in cricket. The fielding team accumulates wickets against the batting team. In most cases, the maximum number of wickets taken is ten. There are five main ways teams can collect a wicket. They are: being caught, bowled, run out, stumped, or leg before wicket. Once a wicket is taken against a batsman, that batsman is out, and another one must take their place.

When do teams switch sides?

Pages Related to How Does Scoring Work In Cricket?