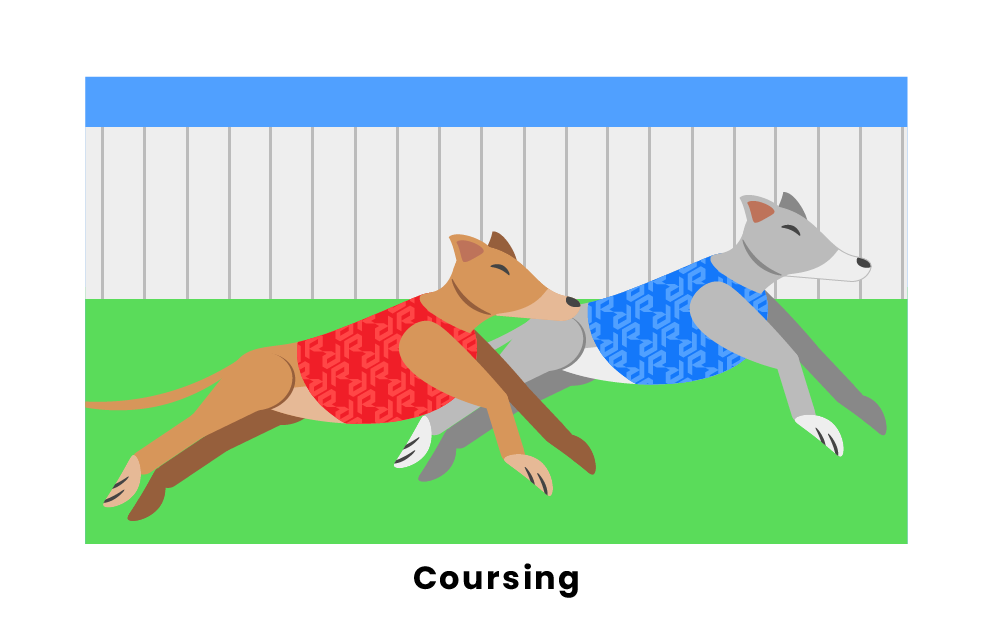 Coursing is a hunting sport involving dogs, which attempt to chase down game animals by sight alone rather than smell. Modern coursing involves two dogs, usually greyhounds, which are released at the same time in order to chase down a hare. The dogs are judged on whether they can catch the hare, and also on overall performance, with points being awarded for outracing the other dog, for turning the hare at a right or acute angle, for tripping the hare, or for a kill. Another, less dangerous form of coursing is lure coursing, where a dog or dogs chase a mechanized lure made of white plastic, which mimics the movements of a hare.

As a sport, coursing dates back to ancient times. It is described by the Ancient Greek historian Arrian in his book Cynegeticus, which is based on an earlier book written by the philosopher Xenophon. Later, in the 16th century, an English nobleman named Thomas Howard, the Duke of Norfolk, drew up the first known coursing rules, known as "the laws of the leash." These rules form the basis of coursing and are still largely held today.

The first known coursing club began at Swaffham in 1776. Later, the Waterloo Cup, one of coursing's major events, was established in 1836 and is held annually at the Altcar Club. In the United Kingdom, where coursing remains popular, the sport is regulated by the National Coursing Club (NCC), founded in 1858. In America, the sport was initially governed by the American Coursing Board, which was replaced by the National Coursing Association (NCA) in 1906. The NCA holds coursing competitions every spring and fall in Abilene, Kansas.

Coursing is a sport where dogs are released in order to chase a hare by sight rather than hunting it by scent. Coursing is typically judged on speed, performance, and the success of the dogs at securing a kill. Points can be earned for various feats, including catching or killing the hare, tripping the hare, or making the hare turn (sometimes called "wrenching"). Lure coursing, a modern form of the sport, utilizes mechanized lures rather than live game.

What are the best breeds to do coursing with?

There are various eligible dog breeds in coursing. The most common breed is the greyhound, which is known for its speed and agility. Greyhounds are used in live game coursing to chase hares. For lure coursing, various eligible breeds are recognized by the American Kennel Club (AKC), including the Afghan Hound, the Azawakh, the Basenji, the Borzoi, the Cirneco Dell'Etna, the Greyhound, the Ibizan Hound, the Irish Wolfhound, the Italian Greyhound, the Pharaoh Hound, the Portuguese Podengo Pequeno, the Rhodesian Ridgeback, the Saluki, the Scottish Deerhound, the Sloughi, and the Whippet.

What equipment do I need to go coursing?

Most coursing does not require much equipment. For traditional coursing, all that is required are the competing dogs, a hare, and a long field for the dogs to race down while they chase the target. Some forms of coursing use muzzles to prevent the dogs from killing the hare, while others leave the dogs unmuzzled. Coursing dogs will sometimes wear specialized jackets in order to make them more easily identifiable. For lure coursing, a specialized lure is required, which is often attached to a strong line and mounted on pulleys to mimic a hare's movements.