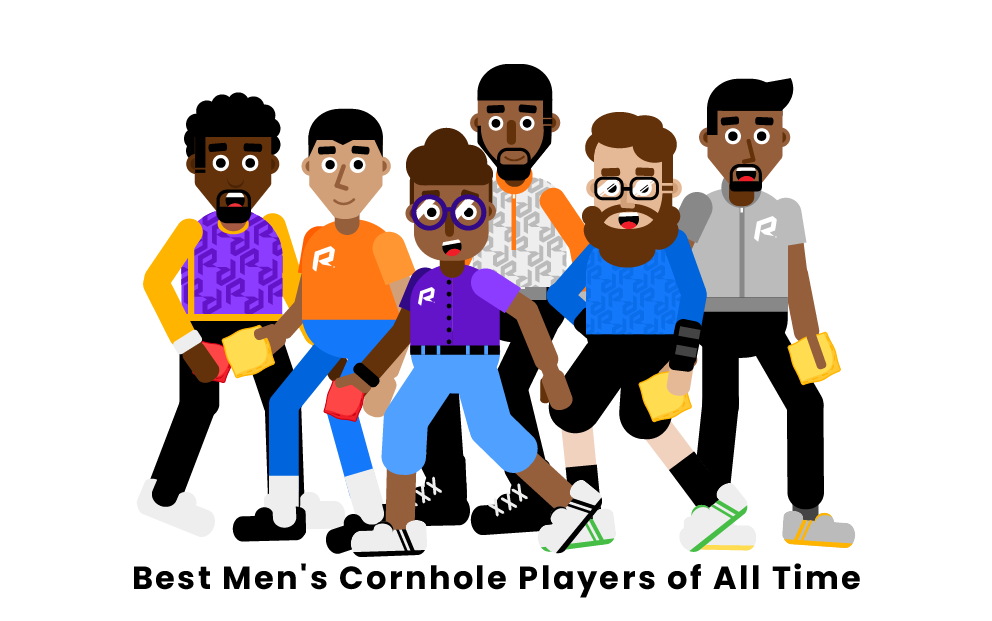 Cornhole is a game often played casually at parties and other get-togethers. It involves throwing a bean bag at a board that determines different point values. Though many people play it casually, some people play professionally. There is even a governing body called the American Cornhole Association. Who are the top six professional players? Read on to find out.

Who are the best men’s cornhole players?

Before becoming the National Cornhole Champion, Kaleb Hurt was the American Cornhole Association (ACO) World Junior Champion in the summer of 2021. Kaleb’s journey to these achievements happened by chance. He and his father, Rex, joined a game of cornhole at a friend’s birthday party, and both fell in love with the sport.

They did not decide to try going pro until 2018, when a family at the Green County Fair encouraged them to attempt a higher level of competition. Nearly the whole family plays the sport now. Rex and Kaleb have achieved a high level of play, and younger siblings Grace and Isaac are well on their way. Mother, Becky, and sibling Luke cheer the rest of the family on.

Austin Cameron was winning professional tournaments at only 14 years old when he won the ACO Juniors Tournament. Though he stated that he was nervous about that tournament, he was still able to outplay other top-ranked players. At the time, Austin was ranked number 34 in the world, and he defeated Erik Davis, who was ranked 35 at the time. In 2022, Austin Cameron rose to the second-ranked player in the world, according to the American Cornhole Association.

To achieve the level of play that Austin has, he has to train. In 2019, he stated that he trains four hours three days a week in a building that was specifically designed for him to work on his cornhole game.

DJ Long is a professional player who trains in Collinwood, Tennessee. As of March 2021, he held the number two title in his name, and he was expected to pose a challenge to Kaleb Hurt. However, as of April 2022, DJ Long is ranked number three by the ACO, and Kaleb Hurt still sits at the top of the list. DJ Long established himself at the Big South Conference. He pitches right-handed.

Bracey Blanton also teamed up with player Stacey Vangilder to take on Maggie Geiger and her father. This doubles game was the sixth major of Season 17. Blanton and Vangilder defeated the Geiger team with a final score of 20-12.

Jack Harcrow is the number six ranked cornhole player, according to the American Cornhole Association. He is from Alabama. Recently, Harcrow faced off against Matt Gammon in the fourth Major of 2022. However, in a surprise win, Jack Harcrow defeated him with a final score of 20-21.

Perhaps more surprising was Jack Harcrow’s win against Kaleb Hurt in the Season 17 Lubbock, Texas Major. Once again, Harcow was playing against a competitor with a higher ranking than him. However, Harcrow still dominated with a final score of 21-8.

Sebastian Barger is an American cornhole player from Paragould, Arkansas, who has won seven American Cornhole Organization major championships in Season 17. He won four majors in the Juniors division and three in the Doubles division. He competes along with his partner, Bracey Blanton. Together, they have been one of the most successful duos in the world of cornhole and will only get better considering their young age.

Isaac Hurt, younger brother of Kaleb Hurt, is an American cornhole player from Banco, Virginia. Isaac has won six majors in Season 17. He won two majors in the Juniors division and four in the Doubles division, the latter of which he competed alongside brother Kaleb. Isaac began playing at a young age due to his family’s interest in the sport, and shows no signs of stopping anytime soon. He earned his purple jersey at the 2021 Charleston Major.

Bob Heil is a senior cornhole player from Bessemer, Michigan, who competes in the Northern Wisconsin Cornhole and Central Wisconsin Cornhole divisions of the ACO, playing for the BWC club. Heil is highly ranked on the Corny 40 and won his first purple jersey at the Sioux City Major in 2021. At the 2022 ACO Worlds in Branson, Missouri, Heil was named one of the Senior Players of the Season.

Who is the best cornhole player in the world?

The best cornhole player in the world is Kaleb Hurt. Hurt has dominated in the American Cornhole Organization (ACO) since 2017 and shows no signs of slowing down. He has won 15 majors in Season 17, and has held the number one spot in the ACO Singles rankings in multiple years. He also competes in Doubles with his younger brother Isaac Hurt, who together have won four majors in Season 17.

What are the biggest cornhole leagues?

The two biggest cornhole leagues are the American Cornhole Organization (ACO) and the American Cornhole League (ACL). The ACO was founded in 2005 and claims to be the official governing body of cornhole. The ACL sanctions several levels of amateur and professional competitions, hosted by the World Cornhole Organization (WCO), which has a stated mission of getting cornhole adopted into the Olympics.