How Does Scoring Work In Cornhole? 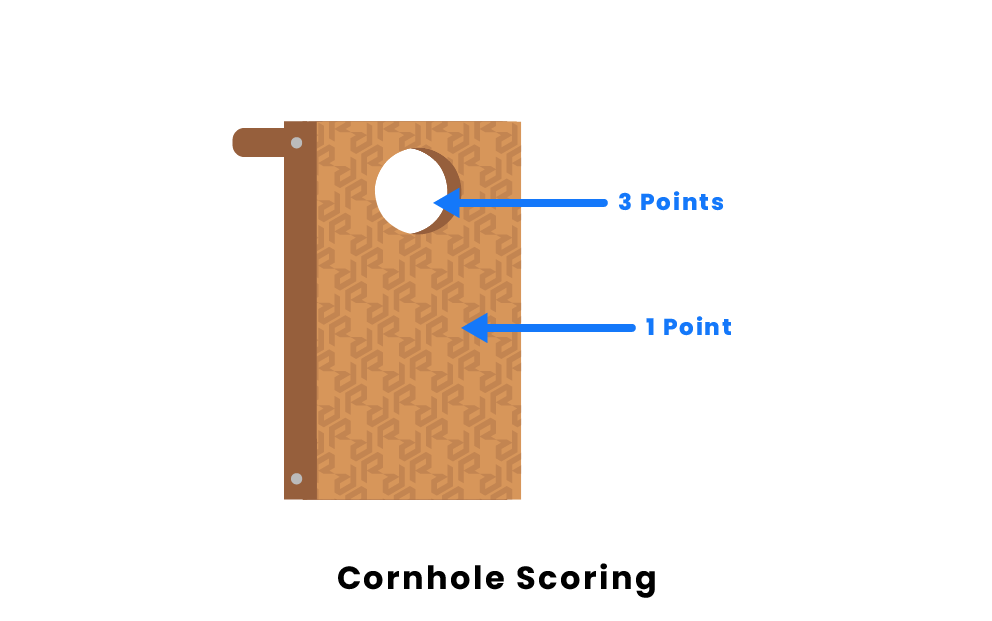 If you’re new to the sport, the scoring methodology in cornhole can seem pretty strange. In itself, it’s a fairly straightforward game; all you have to do is toss the bean bag onto the board and try to make it go into the hole. You’ll probably be playing this game at a restaurant or in a friend's backyard during a BBQ. However, like any other sport, once you get down into the nitty-gritty, it can have a lot of details that players need to understand. In cornhole, keeping track of the score can prove to be a problem if you aren’t paying attention to your points or the opposing team’s points. Read on to learn about how the scoring works in cornhole.

The goal in cornhole is simple: be the first team to reach 21 points, and you’ll win the match. There are a couple of different ways to score points in cornhole, the first and most obvious being to score a cornhole. A cornhole refers to when the player tosses the bag through the hole on the board. Scoring a cornhole is always what the player aims for when they’re up to toss their bag onto the board. A cornhole counts as three points. The second way to score points is by tossing the bag onto the board, and this counts as one point. If a bag is already on the board and another bag is tossed, bumping the stationary bag into the hole, it will count as a cornhole and is still worth three points. If a bag is tossed and does not land on the board or go through the hole, it will be worth zero points. The players will toss their bags, alternating with their opponent until both teams have thrown all their bags. They will then switch sides and repeat the process until a team is the first to reach 21.

Now you might be thinking the proper way to add up points in cornhole is to simply count all the points your team has scored. You aren’t wrong to assume this, but cornhole works a little bit differently than most common scoring systems. After all of the bags from both teams have been tossed, each team will add up their points. Let's say Team A has scored five points, and Team B has scored three. Team A will take their score and subtract the score of Team B. So, in this case, it would be five minus three, leaving a total of two. For this round, Team A will add two points to their score total. Unfortunately for Team B, they won’t have any points added to their score from this inning. Due to how this point system works, only one team can score points in each inning. This method of adding points is known as cancellation scoring.

Depending on the people you’re playing with or how you learned to play cornhole, there are a couple of different formats used to structure winning in cornhole. The first and foremost method is simply to be the first team to score 21 points or more. This method is the most common and usually the easiest to play by.

However, teams can also decide to play using a rule that only allows the game to be won by reaching 21 points exactly. If a team scores over 21 points, like, for example, they were at 20 points and accidentally scored a cornhole making their score 23, then their score will be reverted back to 13 points, and they will need to reach 21 again. This rule tends to make the games last longer, making winning more difficult.

The third and final way to structure the point system is to implement a win-by-two rule. For a team to win, they will need to score 21 or more points and be at least two points ahead of their opponents. If one team is at 20 and the other is at 21, the game will not be over. This rule also makes the game last longer and more difficult to win.

Cornhole has a whole bunch of unique terms. Rather than going over all of them, we’ll briefly highlight some of the terms used in reference to scoring points. You may have noticed that when the bag goes through the hole, this is called a cornhole. When a player puts all four bags on the board in one turn, this is known as a corn-on-the-cob. If a player consecutively puts two bags through the hole, this is referred to as “Dos Cornholes.” Likewise, when three bags are put through the hole, it is a “Holy Moly Triple Cornholy,” and when four bags are put through the hole, it’s known as “The Great Cornholio.” These terms really don’t mean anything in relation to gameplay, but they can be pretty fun to say, especially if you’re able to score that many points in one turn! Lastly, when a bag is sunk through the hole without touching any wood, the player can say, “Nothin’ But Corn.” This is a play on the basketball term “Nothin’ But Net.”

Pages Related to How Does Scoring Work In Cornhole?