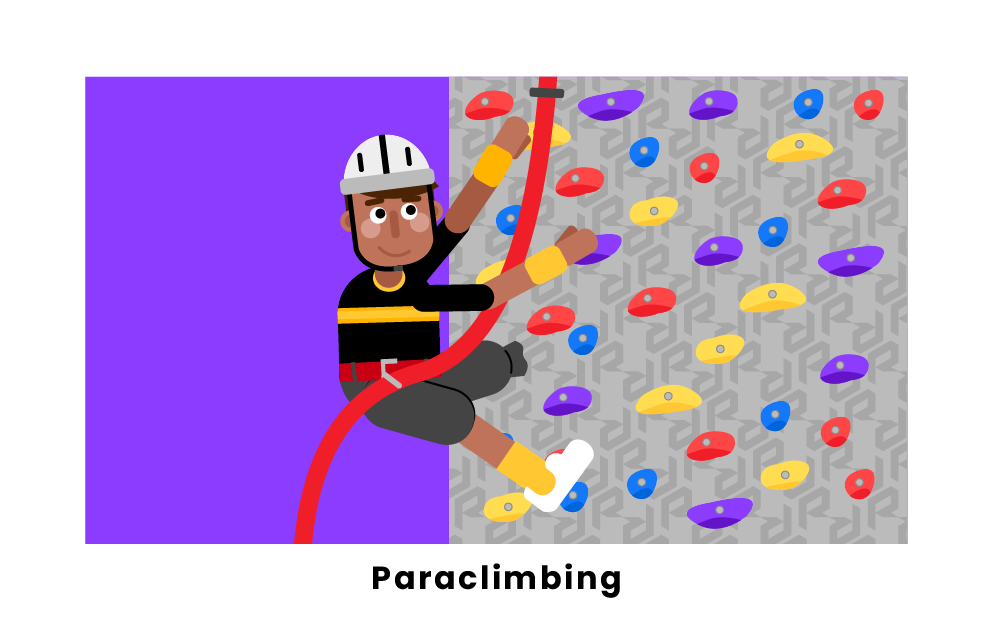 Paraclimbing (also called “adaptive climbing”) is a climbing sport designed specifically for athletes with physical disabilities, such as the loss of one or more limbs. An internationally recognized sport, paraclimbing involves climbing walls in a set route and is often used as a method of recovery and therapy for disabled athletes, in addition to its role as a competitive sport.

The history of paraclimbing can be traced back to the 1940’s, to the first known amputee rock climber, Jim Gorin. Due to a childhood bone disease, Gorin lost one leg at the age of six but was inspired to become a prolific rock climber. Gorin eventually became so skilled at rock climbing that he became the chairman of the rock climbing section of the Southern California Sierra Club chapter. Many years later, paraclimbing gained new public popularity because of Hugh Herr, another famous disabled athlete. Herr lost both of his legs to frostbite after being stranded with a group of friends during a trip up Mount Washington in New Hampshire. However, despite his amputations, Herr continued his love of climbing, developing his own prosthetics that enabled him to climb.

Over the years, as disability advocacy has grown, paraclimbing has become an increasingly recognized and regulated sport. The International Federation of Sport Climbing (IFSC), an IOC-recognized governing body, manages paraclimbing. Though it has not yet made its Paralympic debut, the sport may be considered for inclusion in the 2028 Los Angeles Paralympics. Additionally, the recent inclusion of standard sport climbing in the 2020 Tokyo Olympics indicates that paraclimbing may soon be popular enough to join the Paralympic Games.

Paraclimbing is a sport designed for athletes with disabilities and is similar to rock or sport climbing. In paraclimbing, athletes climb a wall both vertically and horizontally, following a set route by using hand and footholds in order to navigate obstacles. Paraclimbing is an internationally recognized sport managed by the International Federation of Sport Climbing and by USA Climbing in America. Though paraclimbing has not yet made its Paralympic debut, the sport’s rising popularity makes it a strong candidate for inclusion in the coming years.

What are the biggest paraclimbing competitions in the world?

What are the different categories of competitive paraclimbing?

Pages Related to What is Paraclimbing?