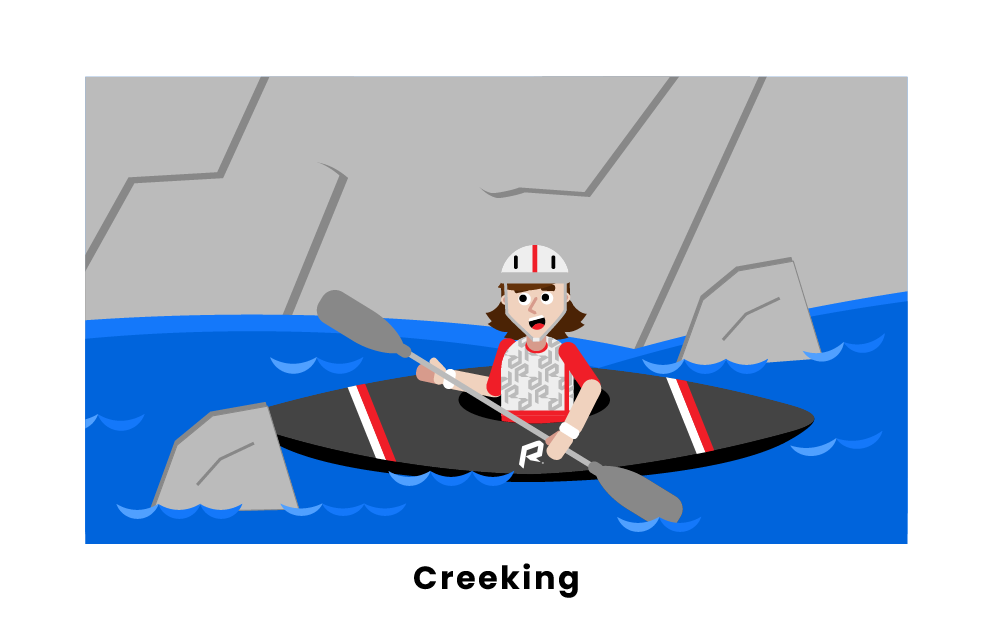 Creeking is a sport that is a branch of canoeing and kayaking. Creeking involves a single kayaker descending steep, low-volume whitewater rivers while attempting to keep upright. In order to successfully perform creeking, boaters will use specialized canoes or kayaks, which are designed to withstand the intense whitewater of the sport and give paddlers the maneuverability they require to avoid river obstacles. Creeking is a very strategic sport that involves a lot of planning and analyzing river patterns to see how they will affect a boat. Creekboats are designed with the ability to rock, giving them enhanced maneuverability, and have high-volume, blunted ends, which allow them to resurface quickly from the water.

The history of creeking extends back to the early days of kayaking, which was practiced both by Native Americans and early explorers in the Midwestern United States. However, the more recent popularization of creeking originated in the 1980’s, when whitewater sports like rafting and canoeing became popular. Whitewater sports first developed into an industry in the 1980’s, after years of growing popularity due to whitewater rafting trips down various rivers in the U.S. National Parks. By the 1990’s, approximately 14.8 million people participated in whitewater sports in the United States, and in 1997, the International Rafting Federation, which governs whitewater sports like rafting and creeking, was founded, with the first world championship being held in 1999.

Creeking is a whitewater sport where a kayaker or canoer navigates steep, low-volume whitewater in a single, self-propelled boat. Creeking is a sport of strategy and skill, and requires a good deal of planning and discipline to perform correctly. Creeking, along with other whitewater sports, first became popular in the 1980’s and now draws millions of people each year. Creeking is governed by the International Rafting Federation.

Where are the best places to go creeking?

There are many popular locations to go creeking and whitewater kayaking throughout the world, including Zambia, Canada, Alaska, Nepal, and Costa Rica. The Zambezi River in Zambia is known for its high waterfalls and intense rapids, which range from Class IV-V, some of the highest-scaled rapids in difficulty. Canada’s Ottawa River offers towering waves and hydraulics for creekers and kayakers to navigate. In Alaska, the Alsek/Tatshenshini Watershed contains Class III rapids, as well as icebergs and glaciers for kayakers to traverse. The Sun Kosi River in Nepal contains rapids reminiscent of the American Grand Canyon, as well as exotic animals like monkeys. Finally, the Pacuare River in Costa Rica contains intense whitewater rapids that run through long stretches of tropical jungle.

What equipment do I need to safely go creeking?

There are a number of important pieces of equipment necessary for effective and safe creeking. Firstly, creekers will want to have a first aid kit with them in order to attend to any possible injuries. A throw bag for supplies is another important necessity, as is a secondary breakdown paddle, for use in case the primary paddle is damaged. Most creekers bring a pin kit with them, which contains tools that can be used to retrieve items pinned in the water. River shoes, a rescue vest, life jackets, elbow pads, and a helmet are also vital protective equipment for creeking. Finally, anyone who wishes to go creeking will need a sturdy and durable boat.

Pages Related to What is Creeking?