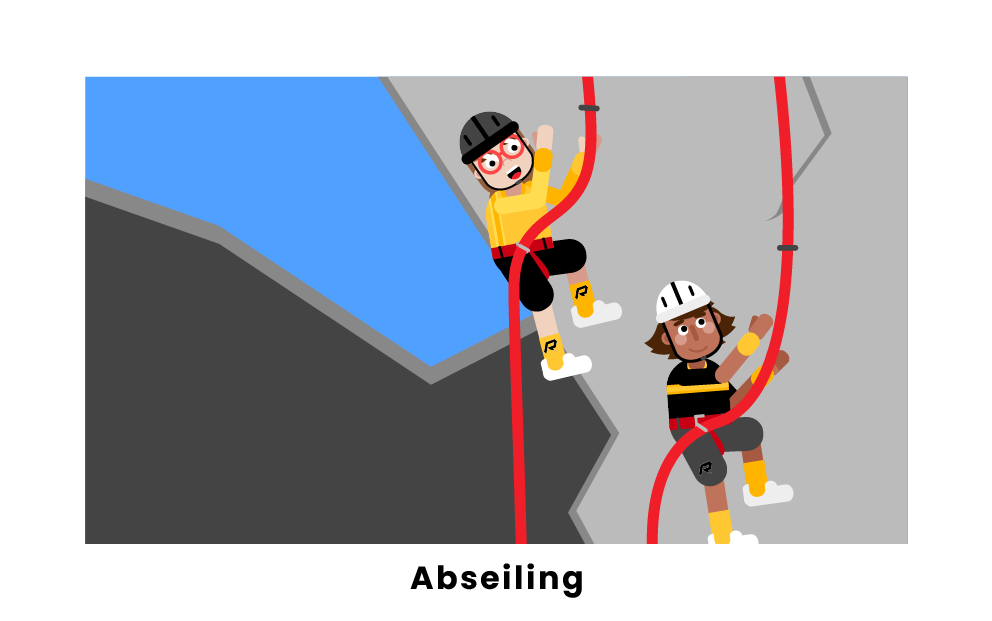 Abseiling (also known as rappelling) is the act of descending down a sheer drop, such as a cliff or wall, by means of ropes attached to an object at the top of the height. Abseiling is a necessity when there is no easy path to either walk or climb down a surface. Abseiling was first invented in 1876, when a French guide from the province of Chamonix, Jean Estéril Charlet (1840-1925), attempted to use ropes to descend the Petit Dru, the smaller summit of the mountain Aiguille du Dru in the French Alps. Charlet’s first solo attempt to do so in 1876 failed, but three years later, in 1879, he succeeded with the help of two other Chamonix guides, Prosper Payot and Frédéric Folliguet. These two attempts were the first known use of ropes for abseiling.

In order to abseil, it is important to follow proper procedures. There must be a fixed point from which the abseiler descends, normally a sturdy tree or rock, which the ropes are fastened to with heavy bolts and chains or a strong sling. This anchor point must be thoroughly checked for wear and tear, either by the elements or animal interference, as breaking it will cause the abseiler to fall, possibly resulting in severe injury or death. The ropes used to descend must be attached to the sling or anchored with metal, as the friction of nylon ropes against a nylon sling will cause both to weaken. The most common method of abseiling is attaching one’s harness to a fixed main rope, holding the rope with their favored hand, and descending slowly in a controlled fall, using their hands and legs to pause periodically.

What is the sport of abseiling?

Abseiling, also called rappelling, is a sport where an athlete uses ropes to descend a steep surface that cannot be climbed down normally or quickly, such as a high cliff or mountainside. Abseilers use a complicated and sturdy system of ropes and harnesses to anchor themselves to a high point and then descend slowly down the ropes in controlled bursts. Abseiling can be dangerous, so it is necessary to wear safety equipment and make routine checks to the abseiling equipment before attempting it.

Where are the best places to go abseiling?

There are many popular places to go abseiling across the world. Some of the most popular abseiling locations include: Table Mountain, South Africa, which boasts a 112-meter descent; The Lost World, New Zealand, a 100-meter descent into a large crevasse; the Stratosphere Hotel, Las Vegas, a 350-meter descent down the tallest freestanding tower in the United States; and El Capitan, California, a half-mile descent which was first abseiled in 2013, becoming the longest free abseil in America.

What equipment do I need to safely go abseiling?

Abseiling requires a great deal of safety equipment in order to be practiced securely. The most important of these are the helmet and harness, which are used to protect the head from bumps or falling rocks and to secure the abseiler to the descending ropes, respectively. Other important abseiling equipment includes gloves to protect the hands from the ropes; boots or other footwear; knee and elbow pads; ropes for descending; and a descender, which is a device used to allow the rope to be paid out in a controlled way without extraneous effort from the abseiler.

Pages Related to What is Abseiling?