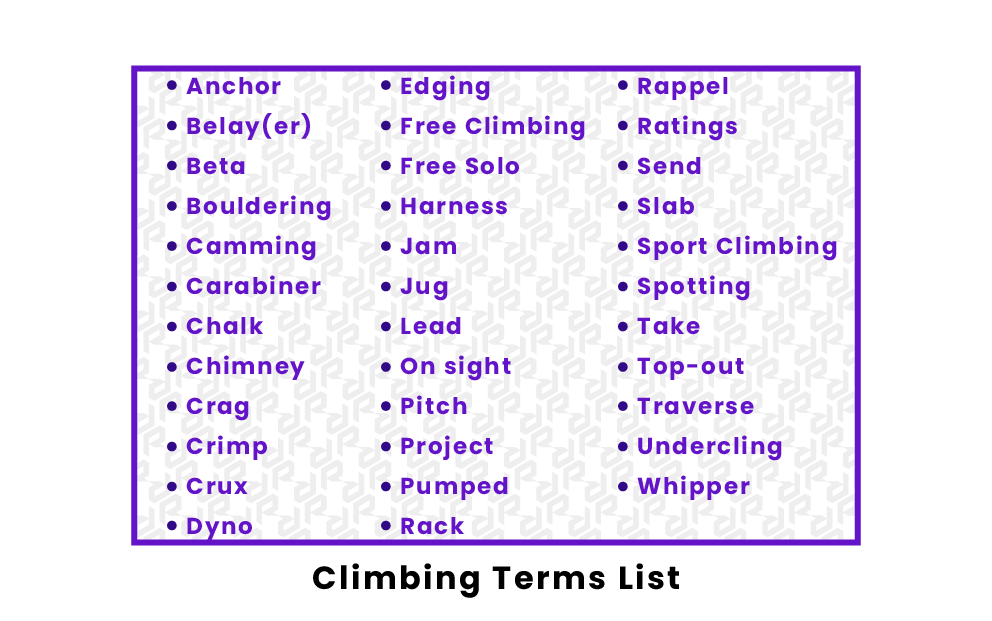 Anchor: An anchor is any point at which weight is being or is going to be supported for a climber or climbers. Anchors can be a clip in the wall, a hold from the rope, or even a belaying set up down below.

Belay(er): Belaying is the process by which a belayer or anchor supports a climber through a rope pulley system set up by those involved. Belaying uses friction from the rope and the belay device to hold the climber secure in case he or she slips or falls.

Beta: Beta refers to advice given to a climber for any given route he or she is trying to complete. If someone is guiding a climber along the climb by giving verbal cues and directions, this is referred to as beta.

Bouldering: An important distinction in the sport, bouldering is a specific type of climbing that does not feature the use of ropes or any fall safety mechanisms. Bouldering is typically limited to about 15 feet in height, and is often done by climbers practicing certain moves or techniques.

Camming: A climber is camming when they are rotating their body in such a way that they find a desired position on the wall or rock and are wedged in. Camming is a climbing technique that allows climbers to be flexible with their movements.

Carabiner: A carabiner is a lockable clip that is used to hold ropes or belaying equipment on the ground, on the wall, or anywhere. Unless you are bouldering, there will more than likely be a carabiner involved.

Chalk: Many climbers use a powdery chalk to assist in gripping the wall or rock face. Some climbers even bring a chalk bag with them on their climb so that they can apply chalk for the most difficult parts of a climb.

Chimney: Similar to how it sounds, a chimney is a large vertical crack where a climber can fit their entire body inside. Climbers will often use their feet, body, and hands to slowly make their way up a chimney.

Crag: A crag refers to a rock face, cliff, wall, or climbing area that features a great deal of potential routes and climbs. A crag is most commonly referred to when outdoors and is usually pretty large. “Cragging” can also mean going out for a good day of climbing.

Crimp: A crimp is a term used to describe a particular type of hold in climbing. Crimps are generally very small holds that only allow enough space for the fingertips to hold on. A climb with several crimps can be challenging if it does not feature good footholds.

Crux: The crux of a climb is the hardest part of a particular route. This is the most challenging move or sequence necessary to complete the climb.

Dyno: Short for dynamic, a dyno is an athletic move made by climbers who wish to reach a hold that is out of static reach. A dyno usually involves a jump from one hold to another, and takes significant power and momentum to do.

Edging: Edging is a technique used by climbers in which the climber is standing on the edge of a small protuberance or ledge of the rock or wall. He or she is standing on their toes instead of the sole of the foot while doing this.

Free Climbing: Free climbing is climbing done while only using hand and foot holds. A rope can be used in free climbing but is only used for safety purposes.

Free Solo: Free soloing is a form of free climbing that involves less equipment and higher risks. Free soloing is when a climber takes on a wall or rock face with no assistance whatsoever. A climber is solo when they are attempting a climb alone with no belayer, no ropes, and nothing to catch them if they fall.

Harness: The harness is the piece of equipment used to hold you up when attempting a climb. A harness is typically worn around the waist and stepped into like a pair of shorts. Harnesses should be secure and able to hold great weights.

Jam: A jam or jamming is a technique used by climbers to make upward progress in difficult spots during a climb. A jam is usually carried out by securely stuffing a body part (hand, foot, arm, etc) into a pocket or opening so that weight can be applied to it and the climber can move up.

Jug: A jug refers to a hold that is large and easily grasped by a climber. Jugs are easily held onto and can provide resting points along a route.

Lead: The term lead is usually used to refer to the lead climber. The lead, or lead climber, is simply the person who leads the way or climbs first on a given route or climb.

On sight: If a climber attempts a climb immediately upon seeing it or without ever being introduced to the route before, they are attempting it “on sight”. On sight climbs can be especially impressive with complicated routes.

Pitch: A pitch is a particular section or part of a climb that takes the length of one rope, or the distance it takes to reach the next belay point or anchor point. Climbs may have more than one pitch, in which they are referred to as a “multi-pitch” climb.

Project: Climbers often develop their own “projects”. A project is a particular climb or sequence that a climber dedicates time to figuring out, and typically will not quit until they conquer that climb.

Pumped: When a climber is pumped, this means they are likely very sore or strained from a lot of climbing. The muscles can become pumped from repeated attempts on a project or simply a high volume of climbing. The forearms are most often pumped after a good climb.

Rack: A rack refers to the gear that you take with you for the duration of a climb. This is typically made up of several carabiners, a chalk bag, a camelback, water, and whatever else is deemed necessary for your climb.

Rappel: Rappelling is the process used by climbers to descend a rock face or a wall. This is a particular technique where climbers walk down the wall in a seated position, with legs straight out in front of them. The legs and body of a climber should make a 90 degree angle when rappelling down a wall.

Ratings: Most climbs in a climbing gym or outdoor facility will be marked off with some letters and numbers that tell how difficult a climb is. A common descriptor used is the letter “V” followed by a number not greater than 15 or 20. The higher the number the more difficult the climb will be.

Send: A “send” on the rock wall is when a climber successfully makes an effort to finish a sequence or a climb, often at the encouragement of other climbers around. To “send it” means to psych yourself out and push to reach the top of the wall.

Slab: A slab is a type of rock face that is steep but not entirely vertical. Slabs are often angled climbs that involve a great deal of friction and precise positioning to successfully and safely climb. It can be very easy to slip on a slab.

Sport Climbing: Sport climbing is a particular type of climbing in which routes are entirely pre set and exactly the same if involving multiple climbers. Sport climbing often features quick, dynamic movements that can be perfected through training.

Spotting: Spotting is a safety technique used by climbers to assist and ensure a safe and secure climb is completed. Often a climber will have a “spotter” who is responsible for guiding and watching the climber as he or she attempts the route. The spotter has often done the route before and knows what the best moves are for it.

Take: Take is often said as a command to the belayer during a climb to take away the present slack in a rope. Often when climbers finish a route or wall they will shout “Take!” down to their belayer so they know to tighten the rope.

Top-out: Topping-out is the action done by climbers to finish a bouldering project or route. To top-out means to push oneself to the top of the boulder or wall so that you are able to stand on top of it. Topping-out is often prohibited at indoor facilities but is often the best part when climbing outdoors.

Undercling: A unique climbing move in which the climber grabs onto a downward facing hold from below. This involves applying opposite pressure by pulling on the hold with an undercling grip form underneath.

Whipper: A whipper refers to a long fall that is typically unexpected by the climber. Whippers can be dangerous and result in serious injury without the proper safety equipment.