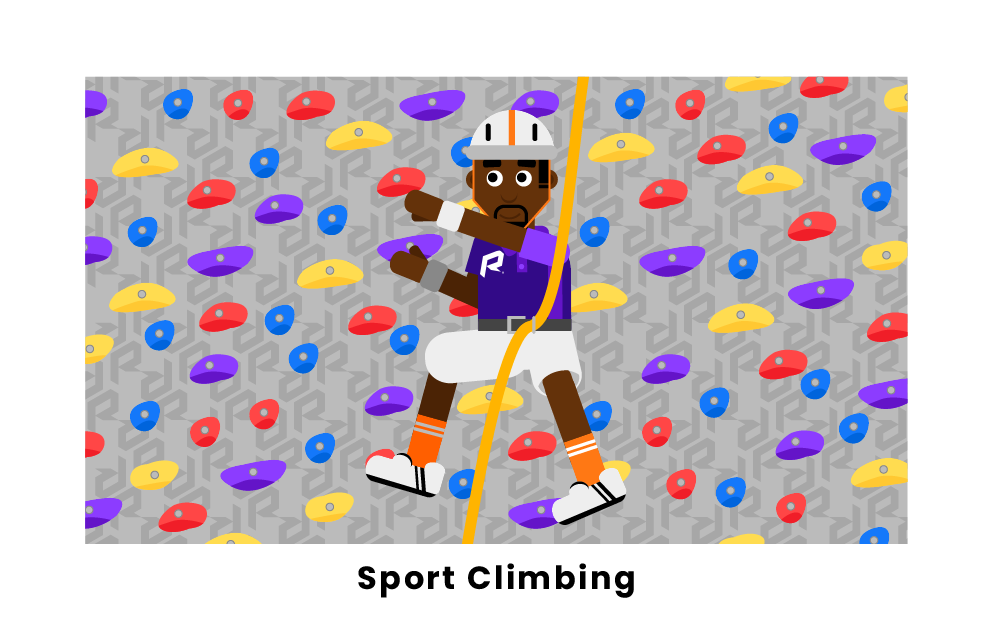 Sport climbing is the most common form of rock climbing and the most accessible for beginners. In fact, there are likely places to go sport climbing in your own community. Sport climbing grew out of the more traditional sport of mountaineering, in which the focus lies on scaling tall and picturesque peaks. Starting in the 1950s, some climbers began shifting their focus to the technical challenges of the climb itself, and sport climbing was born.

Sport climbing was first included in the Summer Olympics in 2021 in Tokyo. The Olympic competition determines a winner based on climbers’ combined performance over three events: bouldering, lead climbing, and speed climbing.

Sport climbing is a form of rock climbing in which a climber ascends a rock or wall face while using a harness and rope attached to a fixed anchor point as protection against injury from falls. In this way, sport climbing is different from traditional climbing, in which climbers place and then remove temporary anchors as they make their ascent. Some forms of sport climbing forgo the use of harnesses and ropes entirely, such as bouldering, in which low heights and a crash pad protect against falls; deep water soloing, in which a body of water cushions potential falls; and free soloing, which provides no fall protection.

Where are the best places to go climbing?

One of the best places to go climbing, especially for beginners, is an indoor climbing gym. Since the 1990’s climbing gyms have spread throughout the world, so finding one is relatively easy. Indoor climbing gyms offer shoe and harness rentals, classes, and certifications, making them an ideal place to hone your craft, particularly in bad weather. Local public parks are also great places for climbing, with easy road and trail access to popular climbs. Epic climbing destinations around the world include national parks Yosemite, Zion, and Red Rocks in the western USA; Zermatt, Switzerland; the Dolomites in Italy; the Bugaboos in Canada; and Patagonia, which spans across Argentina and Chile.

What equipment do I need to go climbing safely?

The primary piece of gear needed to safely go climbing is a pair of climbing shoes, which are designed to grip the rock. Climbers must protect themselves against injury from falls, typically utilizing a harness and rope attached to fixed anchor points. A carabiner and belay device are also necessary to safely provide belay to a climbing partner. Most climbers use climbing chalk, contained in a chalk bag, for added friction and moisture control on their hands. Depending on the area, a climbing helmet may be necessary to protect against falling rocks.