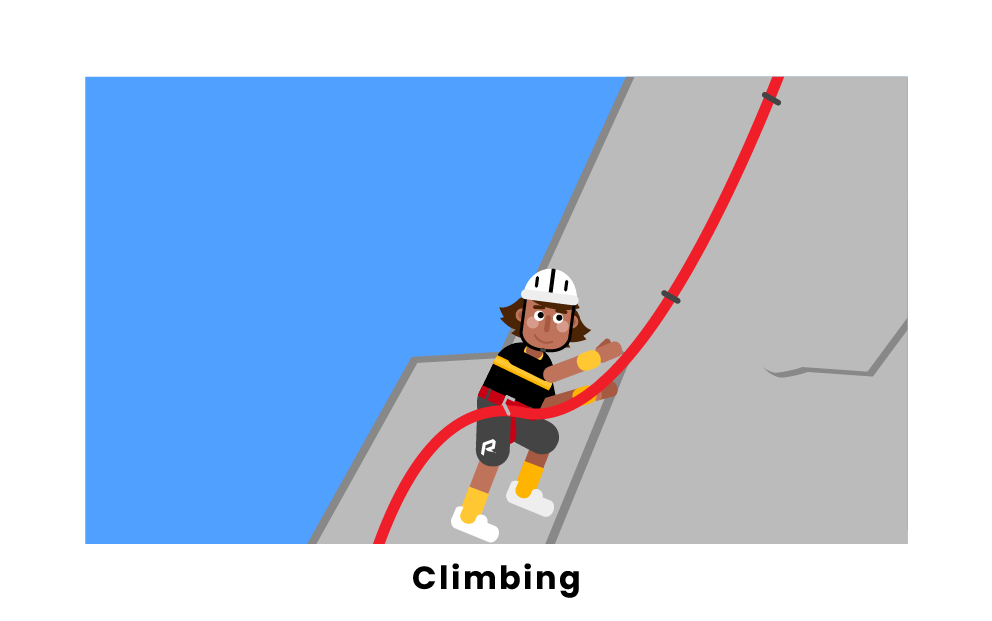 Climbing is a unique sport that can be endeavored so long as you have something to climb. This makes climbing a sport that anyone can try, as there is a vast range of ease and difficulty for climbing different walls, rocks or cliffs. Climbing can be done as bouldering at a big rock near your home or in a gym designed specifically for that purpose. Climbing can also be extremely competitive, as professionals can race to the tops of some of the most challenging climbing walls in the world. In fact, sport climbing will be introduced to the Summer Olympic Games at the 2021 Tokyo Games.

Climbing presents an incredible form of personal achievement, strength and growth. The sport generally requires a great deal of physical effort presenting various challenges to climbers of all skill levels. For this reason, climbing is an excellent opportunity to strengthen your body and fitness through a fun and challenging activity that is a rapidly growing sport around the world. 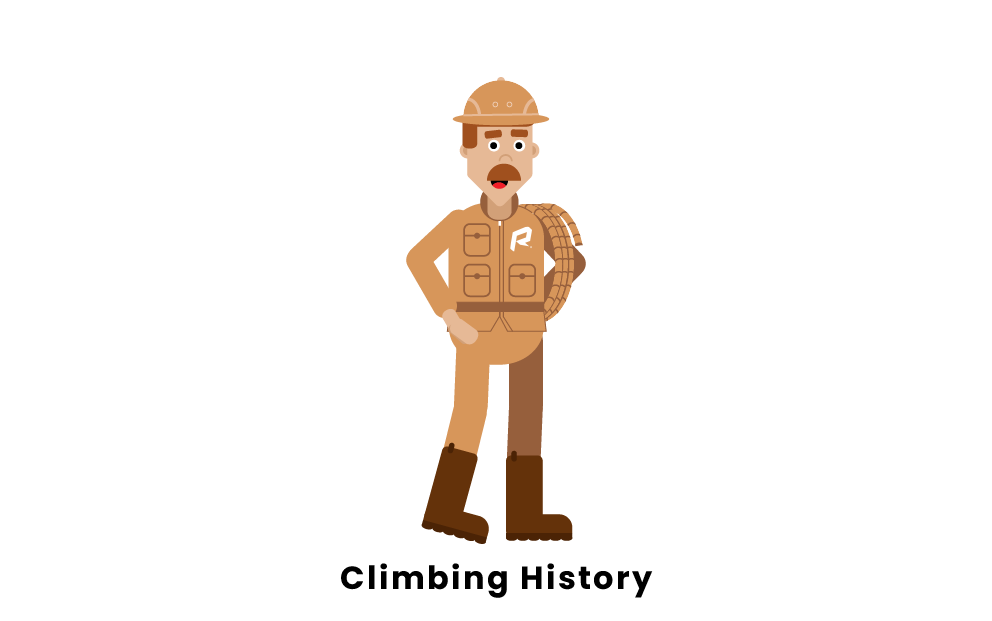 Climbing has quite a dated history going all the way back to paintings of men climbing mountains in 400 BC. Many of these past climbs are labelled as mountaineering, and over time climbers created systems to compare the difficulty of various climbs. In the early 1900s, specific equipment was developed for climbers. In the 1940s the first records of climbing competitions were completed in the USSR. It was around 1950 that rock climbing began to separate itself as a sport in the US. The first public wall constructed for climbing (using bricks for holds) was made in the 1960s. Ultimately, the earliest roots of climbing tended to do with conquesting and discovery all over the world. This passion for literally reaching new heights has flourished into climbing as we know it today. 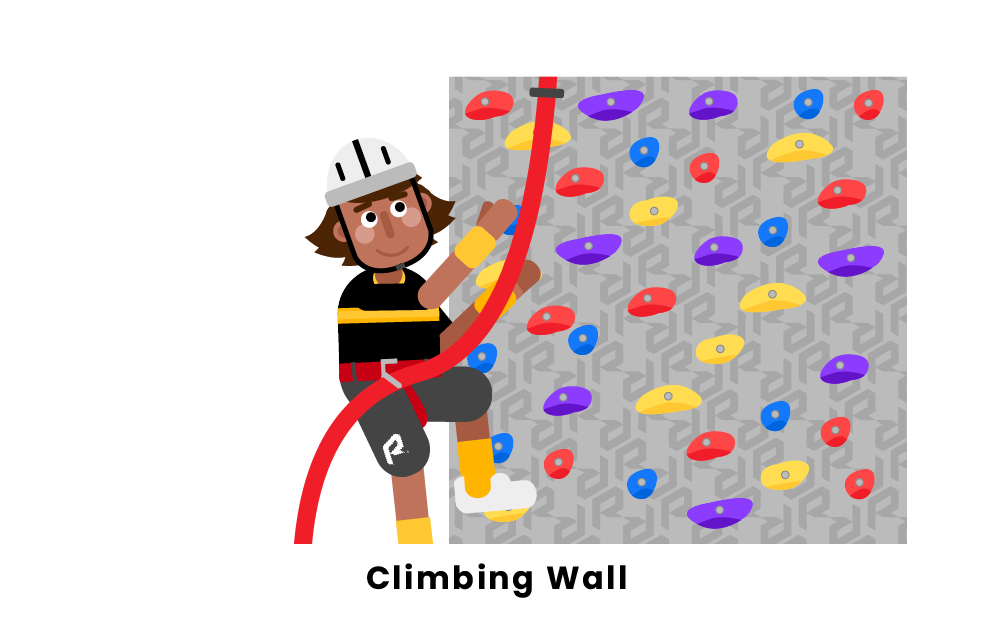 Climbing can be done on a great variety of surfaces. The most surface most often associated with climbing is simply a climbing or rock wall, featuring various handholds along a vertical wall that require some sort of effort to climb. However, climbing is not limited by any means to a simple wall with typical scattered urethane molded holds. Here are some examples of the various climbing surfaces often taken on by climbers: 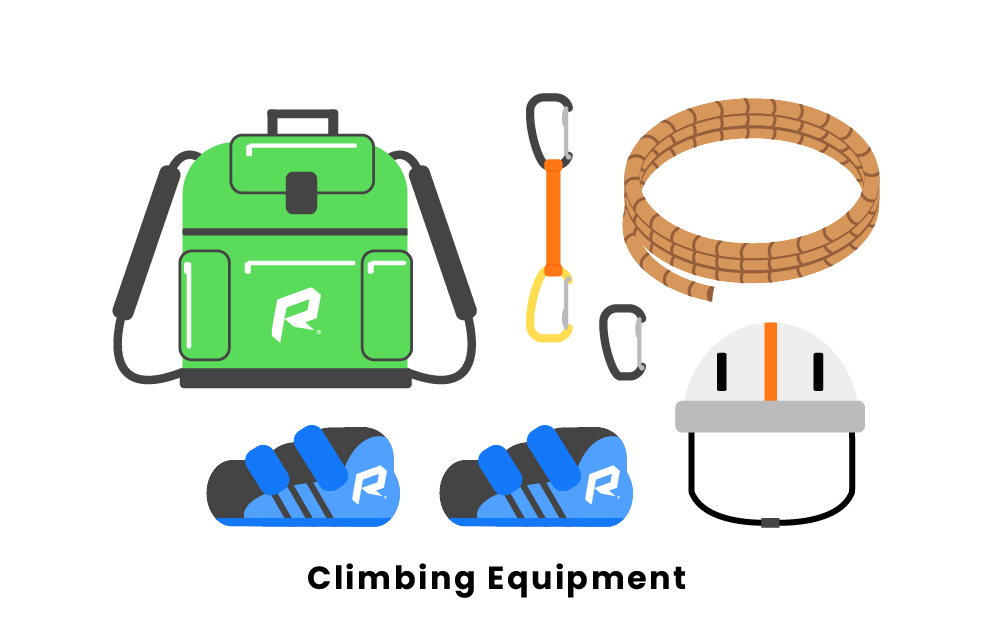 Climbing is a very physically taxing sport that in some cases can be extremely dangerous. There are some basic equipment necessities as well as some niche tools used to enhance the climbing experience. While climbing is often done in an indoor facility, just as much if not more is done outdoors or in the wilderness. Because of this, there are certain equipment items that are very important to ensuring the safety of a climber. Listed below are some of the sport's unique equipment. 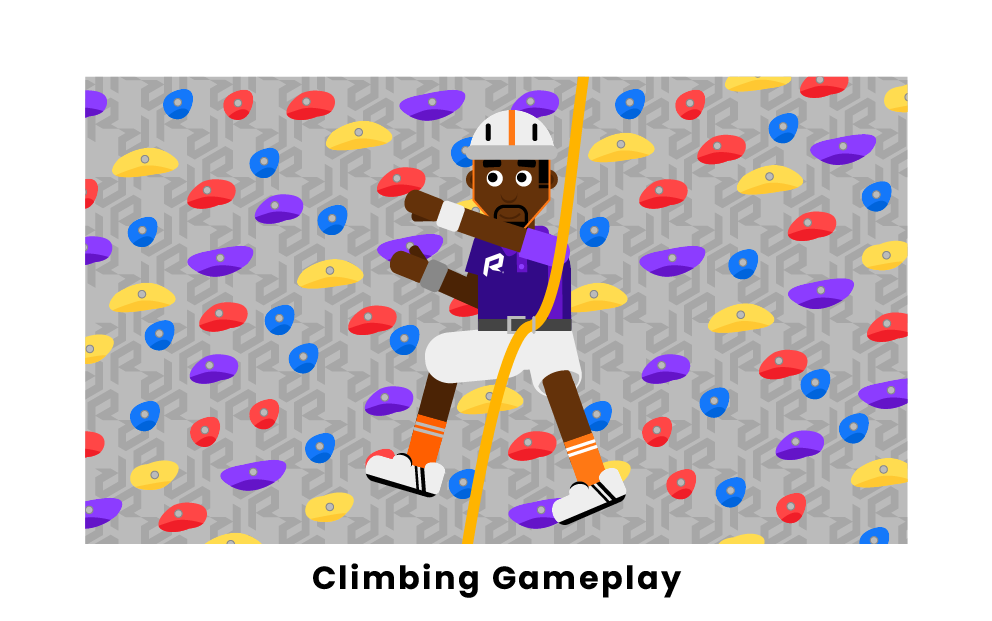 Climbing "gameplay" varies for each type of climbing, but ultimately all variations of climbing have the same goal: get to the top. In speed climbing, climbers race head-to-head on identical routes to see who can reach the top the fastest. When bouldering, no harnesses or ropes are used. So, climbers attempt to complete as many routes as possible. In bouldering indoors there is always a soft or safe surface for climbers to fall onto. Lead climbing tests both strength and speed of climbers, and involves climbers competing to reach the highest point on a wall. Harnesses are used to ensure the safety of the climbers when climbing and downclimbing or rappelling. 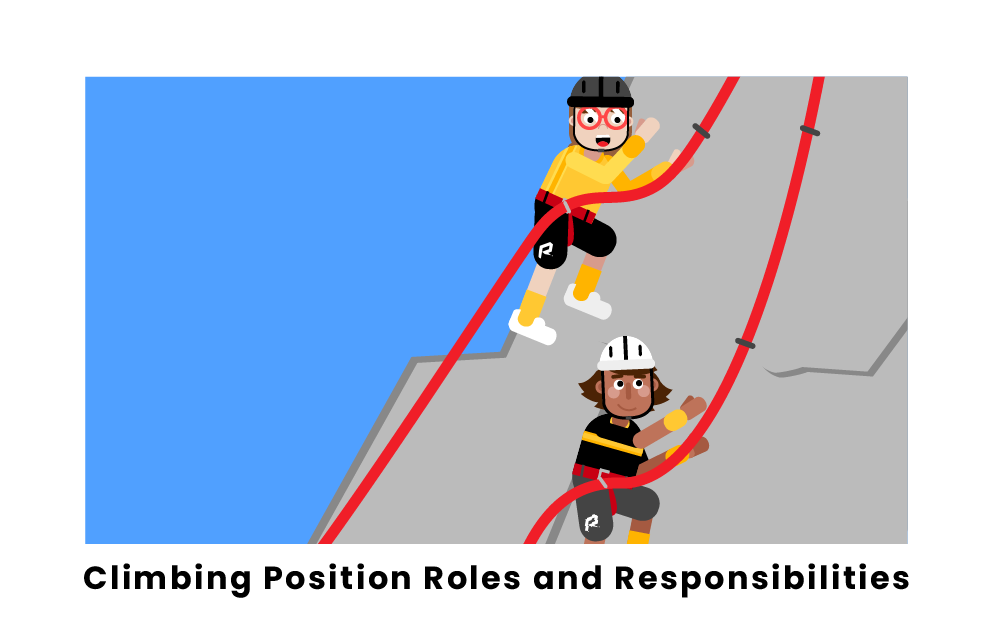 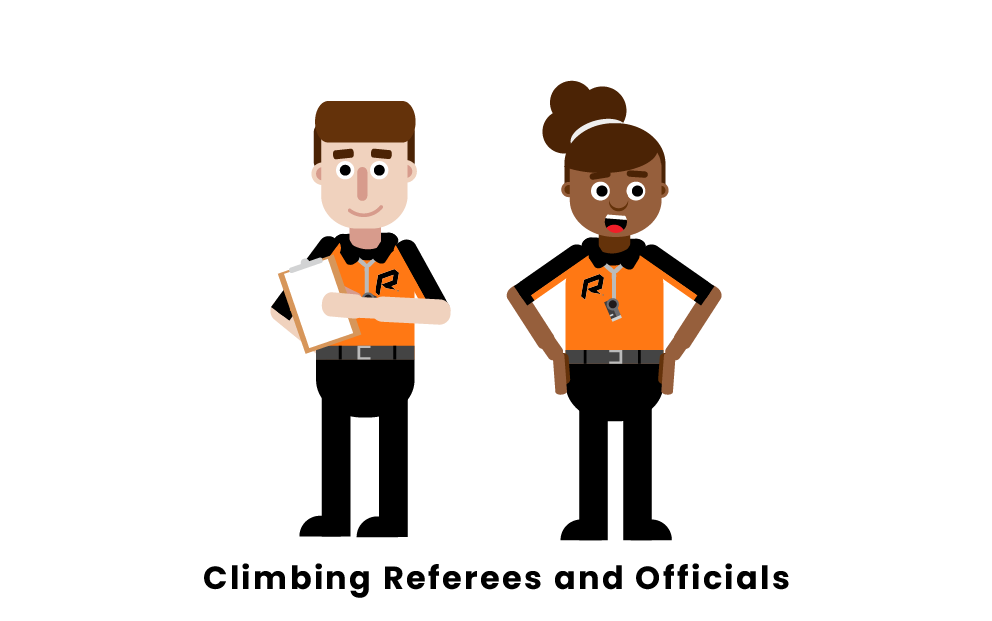 The referees and officials of climbing carry the responsibility of ensuring that all rules and regulations outlined in the official rulebook are met by the competitors, spectators and coaches. At official climbing tournaments and events, there are three categories of officials that are in charge. These officials and their responsibilities are listed below. 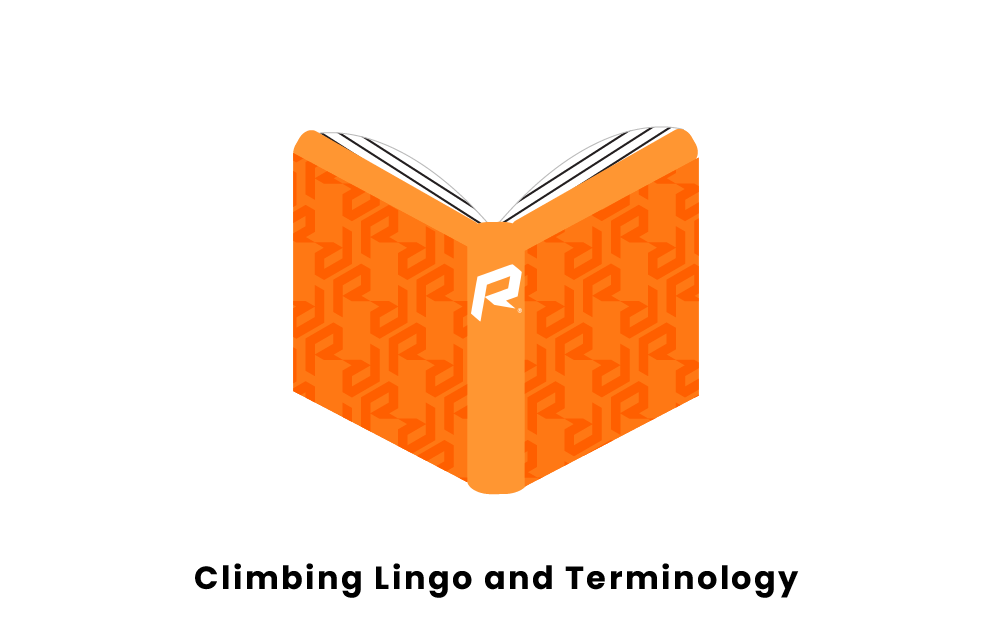 Over time climbers have developed many slang terms within the sport to describe unique characteristics, situations and equipment known only to climbers. Some of this lingo is self-explanatory, but there are plenty of terms that only experienced climbers tend to use and may confuse a rookie climber. Here listed below is some climbing lingo and its meaning. 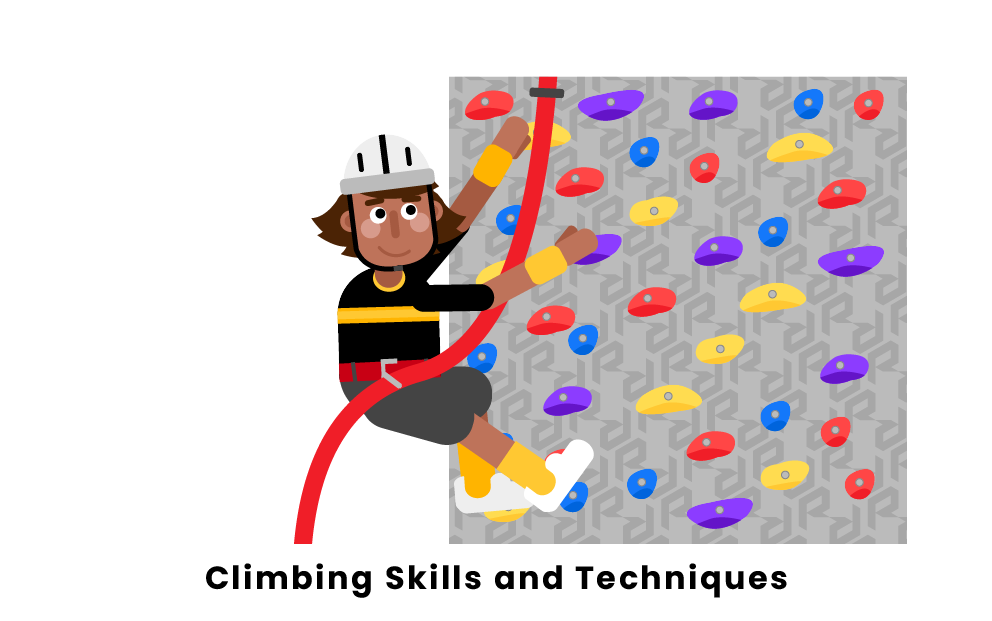 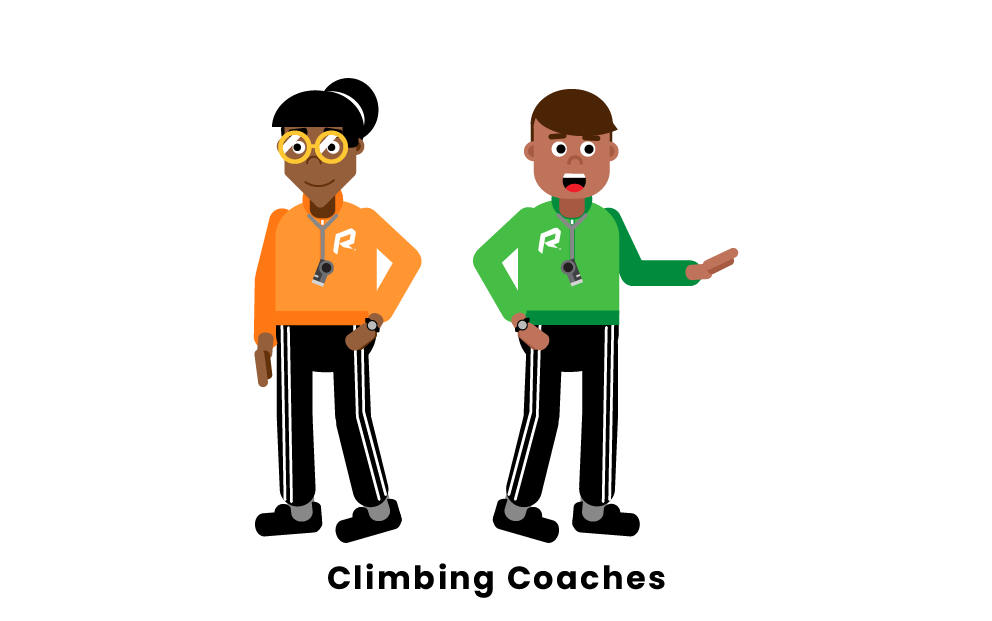 Climbing coaches are generally former or current climbers that have valuable experience and ability that they wish to pass on through teaching their athletes. The best climbing coaches are sure to invest in their entire team, and to focus on the flourishing of their trainees. Not only does it take good climbing experience to be a successful coach, but it requires a great deal of patience and teaching skills that must be developed over time. Some of the most well known climbing coaches are listed below. 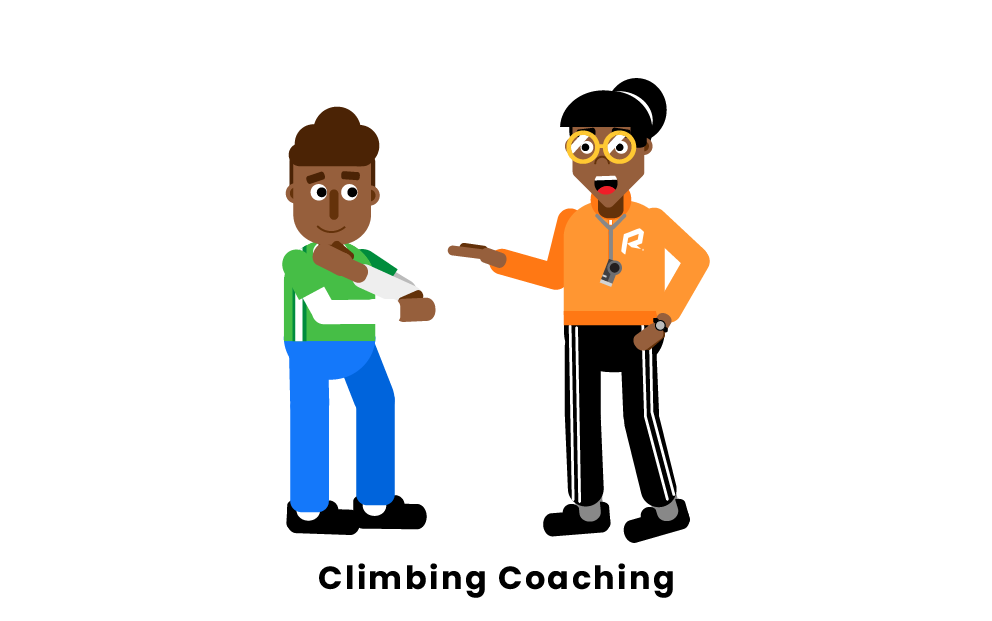 While climbing by its nature is a very intuitive and do-it-yourself sport, having a good coach is key to reaching new heights and getting the most out of your own potential. Coaches are super important for helping to maintain healthiness, develop the best technique and most importantly know exactly what is best for you personally. Talented climbing instructors are not easy to come by, so be sure to be appreciative of the work they do. 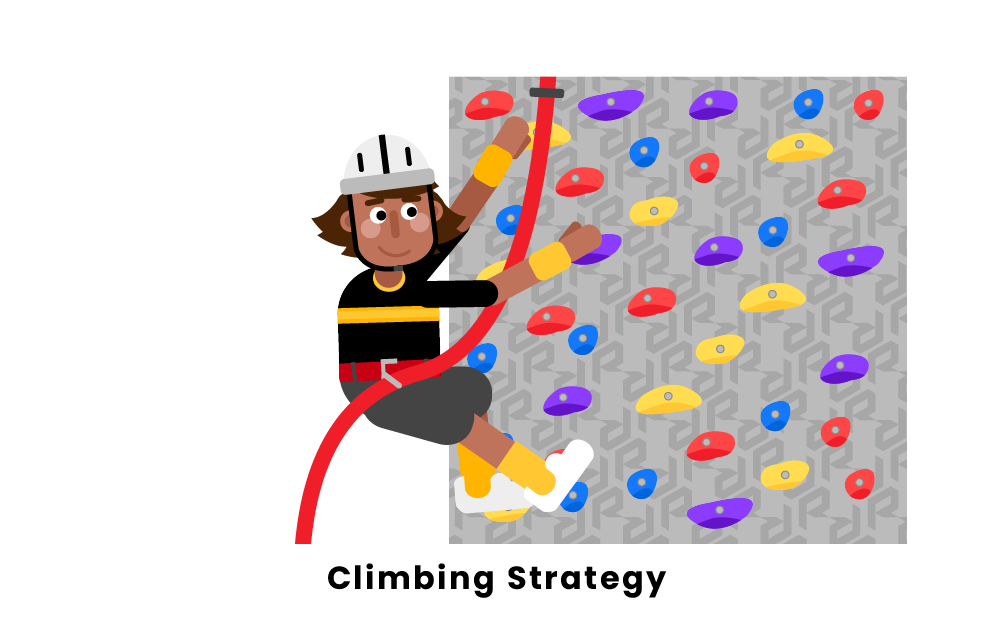 To climb successfully, you may often need a considerable amount of strategy going into a climb. Some climbs can be very complicated, and thus require great compensation and good planning before attempting. There are various different strategies that climbers use, but all share the commonality of helping to ascend a rock or wall.

First, it's important to consider your footwork while climbing. Good feet placement is crucial to having a successful climb. When placing a foot, try not to move it too much once it is set. Also, it is good to keep your feet directly below you when you can to have good balance. Next, it is important to keep a hip close to the wall as much as you can. This will keep your weight against the wall, which will help prevent you from falling. Finally, try to pull or push in the opposite direction when making a move to counter the force so that you don't push yourself off the wall. 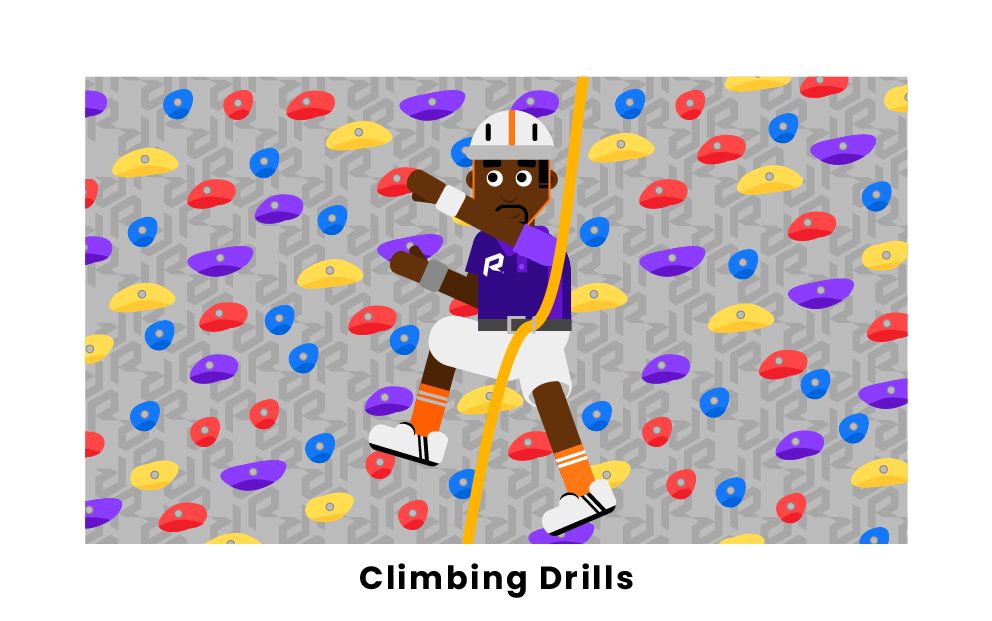 Climbing is unique because there is essentially no end to the number of different routes and courses that one can encounter in the sport. So, it is important to practice various scenarios and drills to prepare for real-life or competition situations. Aside from weight training and personal fitness (very important), there are several drills that can be practiced to prepare for important climbs. Here are some of the best climbing drills: 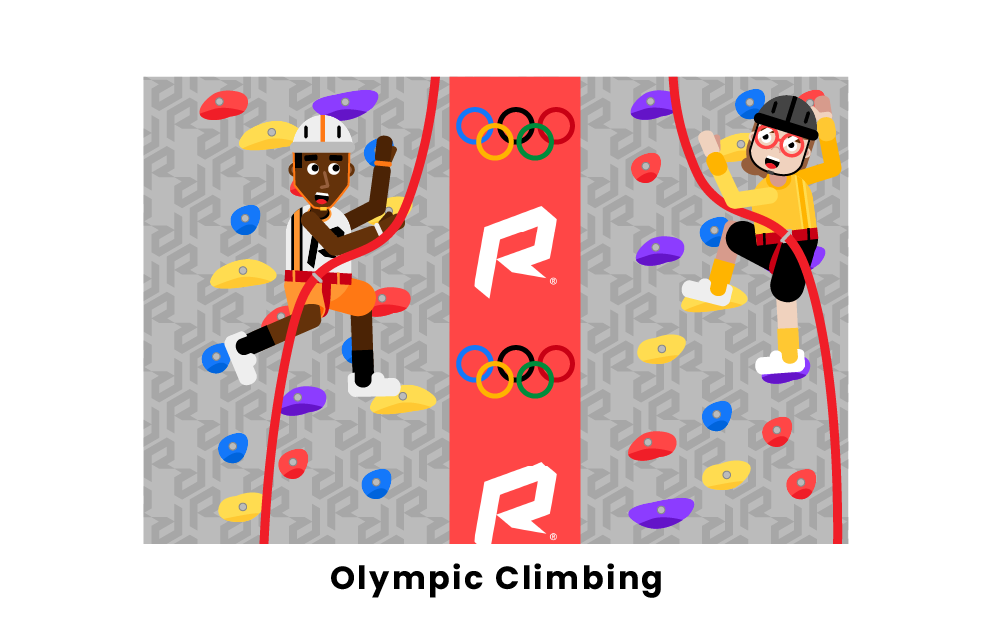 Sport climbing will debut in the Tokyo 2021 Summer Olympic Games. This is the first time that climbing has been featured in the renowned international competition. In the Olympics, climbing will be separated into three separate disciplines, but athletes are required to compete in all three to total a cumulative score to compete for a medal. The three disciplines are speed, bouldering, and lead, which are further described below. 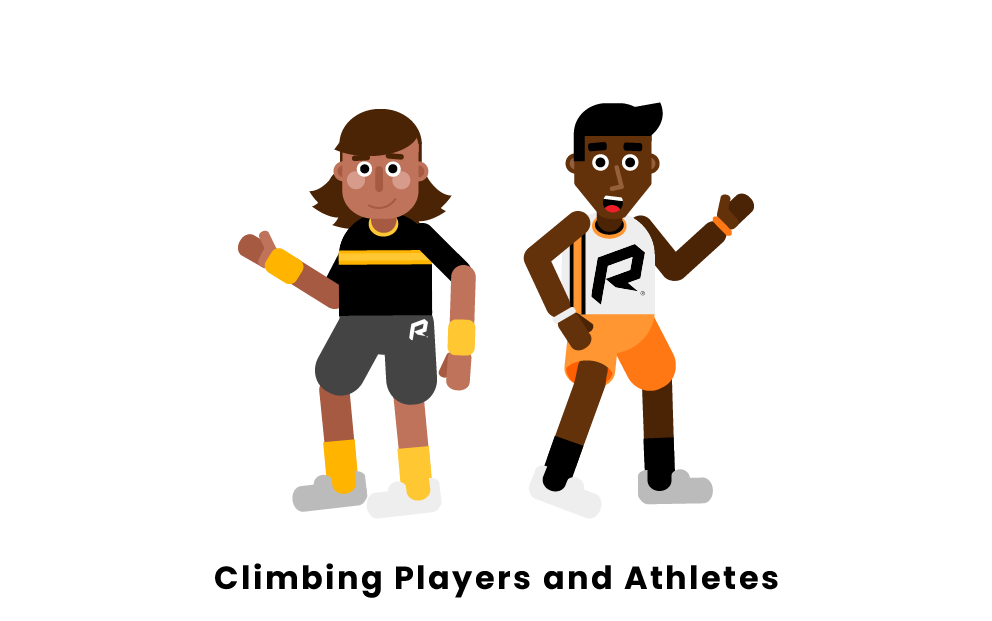 To become one of the best climbers in the world takes years of rigorous dedication and training. Climbing can be an incredibly physically demanding sport, and for that reason many shy away from putting in the necessary efforts to truly excel in the sport. However, some amazing athletes have gone above and beyond that challenge, and have earned the title as some of the best climbers worldwide. 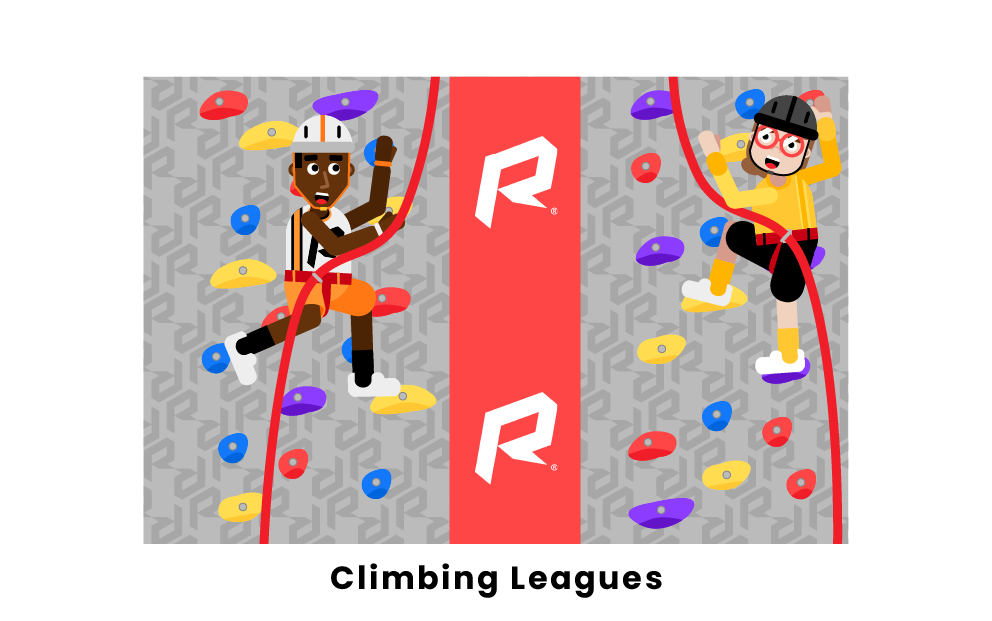 Around the world there are several leagues that serve the purpose of organizing and sponsoring climbing events and tournaments. These leagues have various levels, ranging from youth to professional leagues. The most respected international organization is the IFSC, which coordinates events all around the world working with other climbing leagues. Some well-known climbing leagues are listed below. 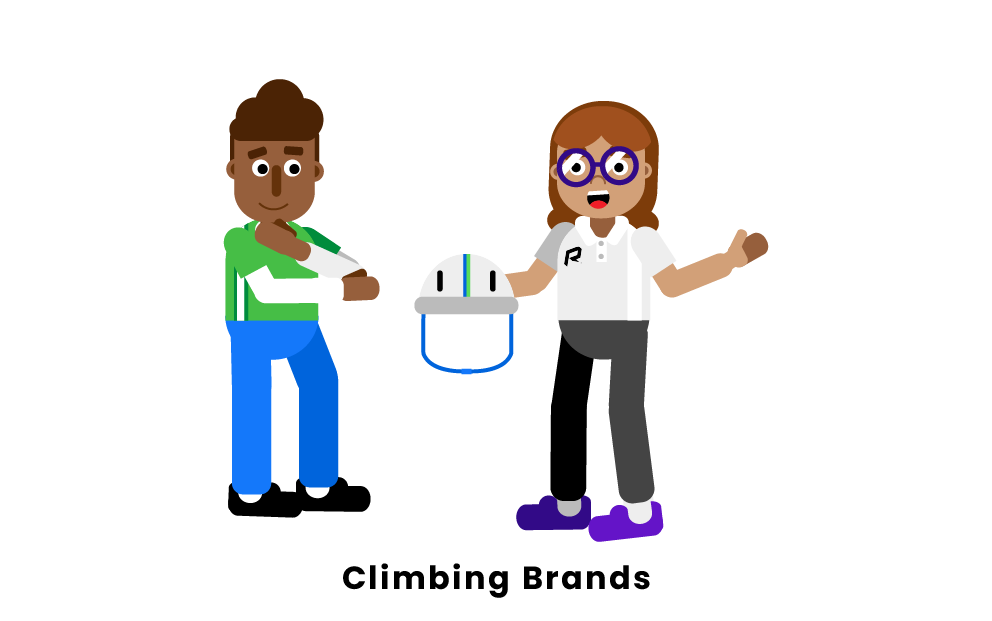 When looking to begin climbing, it is important to have the right gear if you wish to stock up on equipment. While many large companies and stores produce some climbing related equipment, the majority of general sporting stores are not the greatest hubs for finding the best climbing gear. The best climbing gear is usually produced by specifically climbing companies which know what is and is not most important in the production of materials. A few of the best climbing brands are listed below. 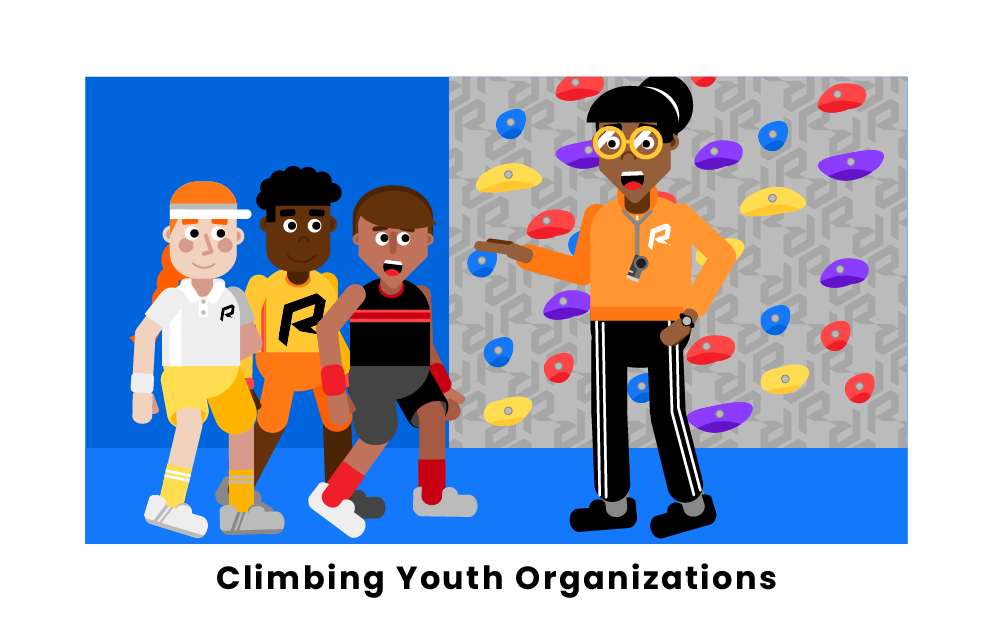 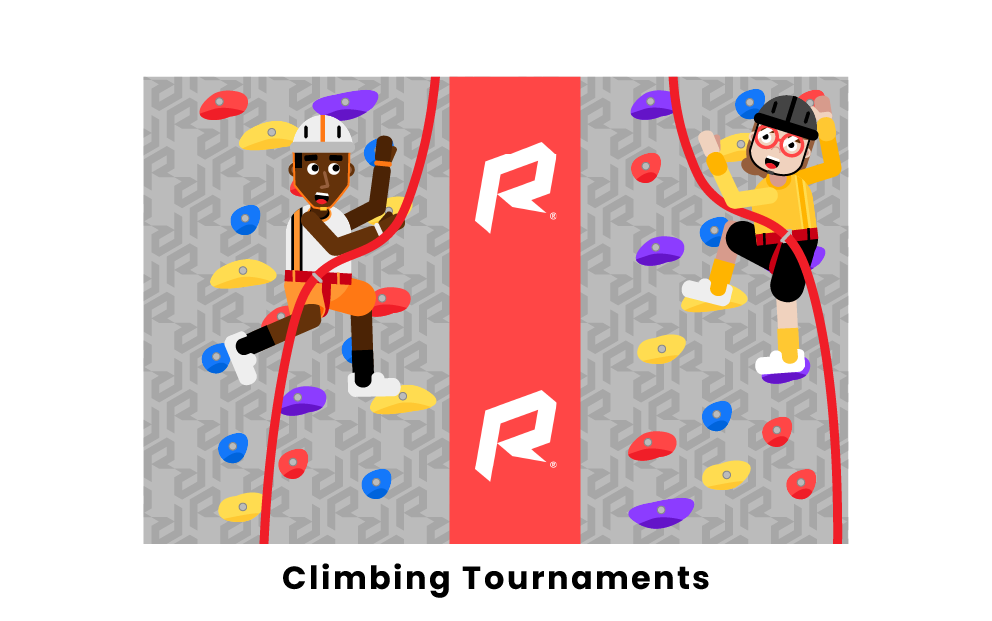 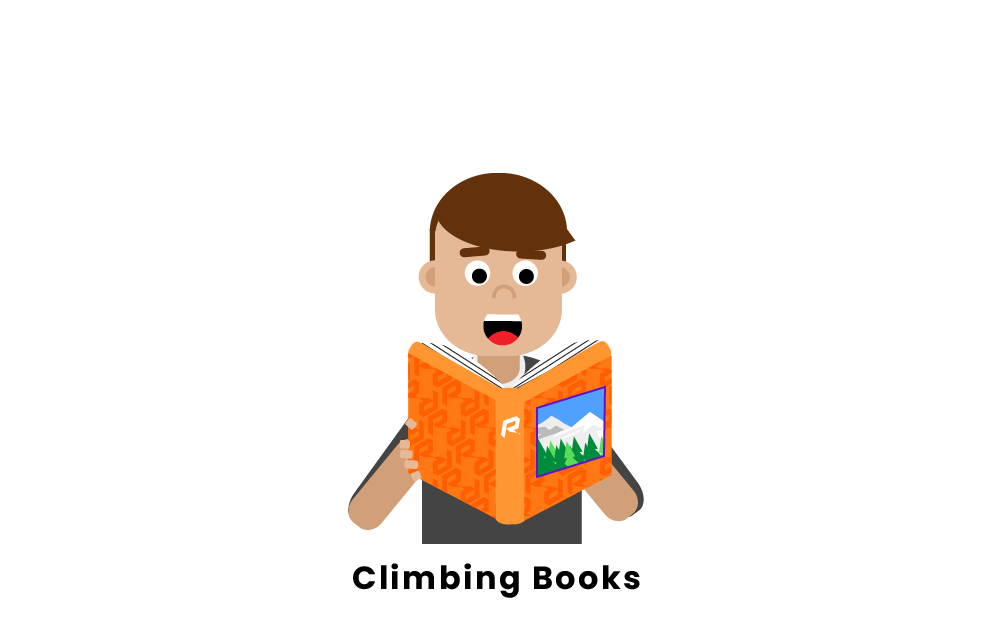 While climbing is a very physically active sport, it can never hurt to dive deep into the world of climbing by cracking open a book. Climbing books can be very useful for developing technique or learning about didactic experiences from some of the climbing greats. Setting time aside to learn about climbing in this way can prove very beneficial to a rookie climber. Some good climbing books are listed below. 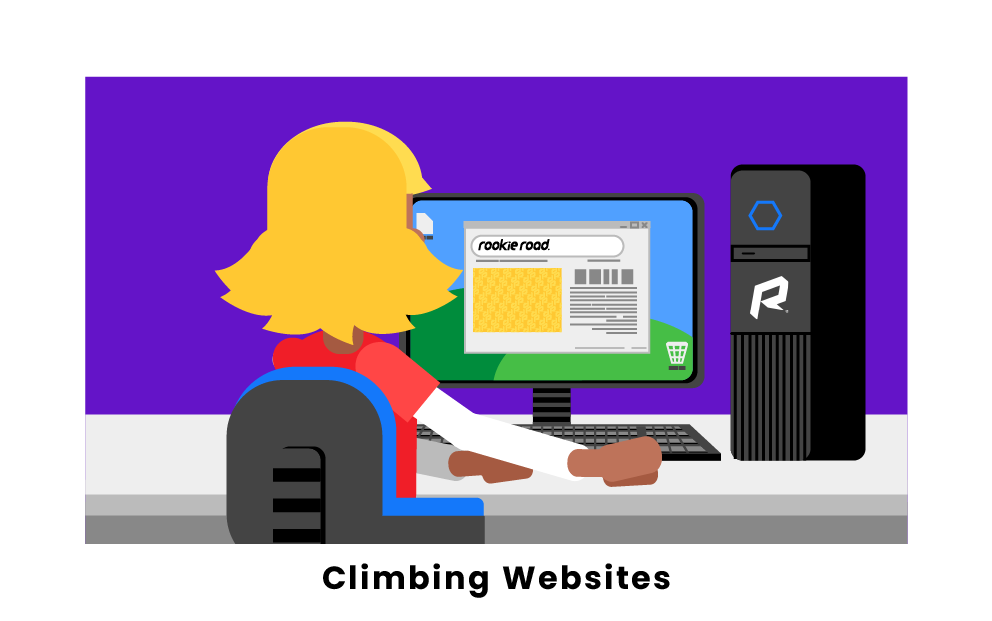 Is rock climbing a good workout?

Rock climbing is a great workout because of all the different parts of the body that are used when climbing. Rock climbing will work your core, arms, legs, glutes and back.

Rock climbing routes are classified through a systemized grading scale to determine the difficulty of each course. So, some routes are very easy while some are difficult for even the best climbers around the world.

What are rock climbers called?

What is a problem in rock climbing?

A problem experienced by many rock climbers is fatigue while on the wall, due to a variety of causes like bad technique or a simply exhausting climb. This is why it is important to take proper safety measures when attempting a difficult climb.