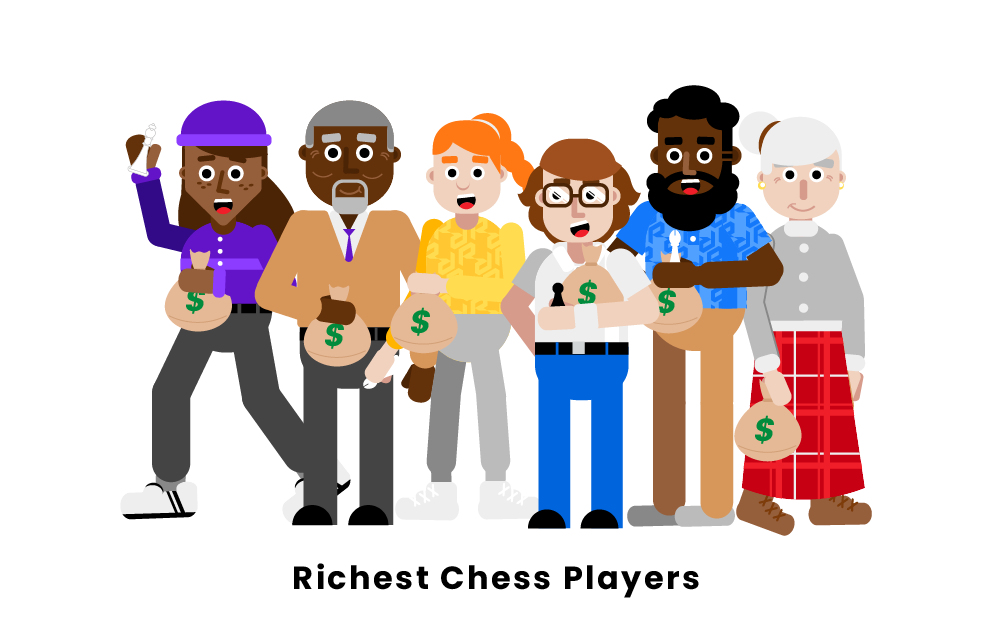 Chess is a fun strategy game played between two players and is often simply thought of as a board game. Therefore, it is often overlooked when it comes to revenue potential. However, the top players in the world pull in income comparable to your favorite athletes. In fact, the top 50 chess players earn over $100,000 per year.

Who are the richest chess players in the world?

Hikaru Nakamura is the richest chess player in the world, with a net worth of $50 million. Hikaru has earned his money through several avenues. He’s made a decent amount through winning tournaments, but most of his income comes from other areas. For example, he wrote a popular novel breaking down his strategies and tips for becoming a better chess player. He also earns an annual salary of $329,644 for representing the USA. Additionally, he is active on social media pages and runs several businesses. He is one of the best chess players in the world and has also been successful in the business world.

Fabiano Caruana is one of the richest chess players in the world and has a net worth of $13 million. He has won tournaments and games that have created significant income streams. For example, Fabiano earned $511,400 for earning silver in the World Championships in 2018. In just two years, he has netted over $1 million from prize money alone. The rest of his income comes from business deals, such as his sponsorships with Chess Club, Scholastic Center, and Liberty Science Center. A net worth of $13 million makes him the second richest chess player after Hikaru Nakamura.

Magnus Carlsen is a Norwegian chess player with a net worth of $8 million. Magnus is one of the fastest growers in the sport when it comes to income. He earns an estimated $2 million from sponsorship deals alone, not including winnings from tournaments and matches. He also has a very successful app called “Play Magnus,” which merged with chess24.com and is one of the largest online chess companies in the world. The way things are trending, it wouldn’t be surprising to see Magnus jump up on this list as he continues to rise in net worth.

Garry Kasparov is a Russian chess player, writer, and activist who has a net worth of $5 million. Gary was a World Chess Champion and peaked in the rankings as number one in 1984, at the time setting the record for the youngest player at the top of the rankings. He makes most of his income from business ventures, including Kasparov International Management. His profits have skyrocketed ever since leaving Russia and living full-time in the US. Kasparov is currently retired from chess and has pursued a career in politics, further increasing his income.

Judit Polgar is a Hungarian chess player worth $5 million. She is regarded as the greatest woman’s chess player of all time. She has earned her money through several revenue sources. She has won several big tournaments and matches but has also written several successful books about chess. Polgar has retired from professional chess but is currently the captain and coach of the Hungarian national team. She also has a chess foundation where she promotes education through the form of chess. She has done very well in the chess world but is also active in other avenues that allow her net worth to rise.

Maxime Vachier-Lagrave is a French chess player worth $5 million. He has earned most of his money through his successful chess career. Maxime has won several big tournaments and was awarded the FIDE Grandmaster title at the young age of 14. In 2019, he was ranked number one in blitz and rapid ratings. Going on his sixteenth year in the sport, Maxime has generated some of his income through sponsorship deals. In addition to his career as a chess player, Maxime also streams on Twitch as a way to unwind. He has recently partnered with STAKRN Agency to manage his Twitch streaming career and to maximize his earnings through avenues in business and sponsorships.