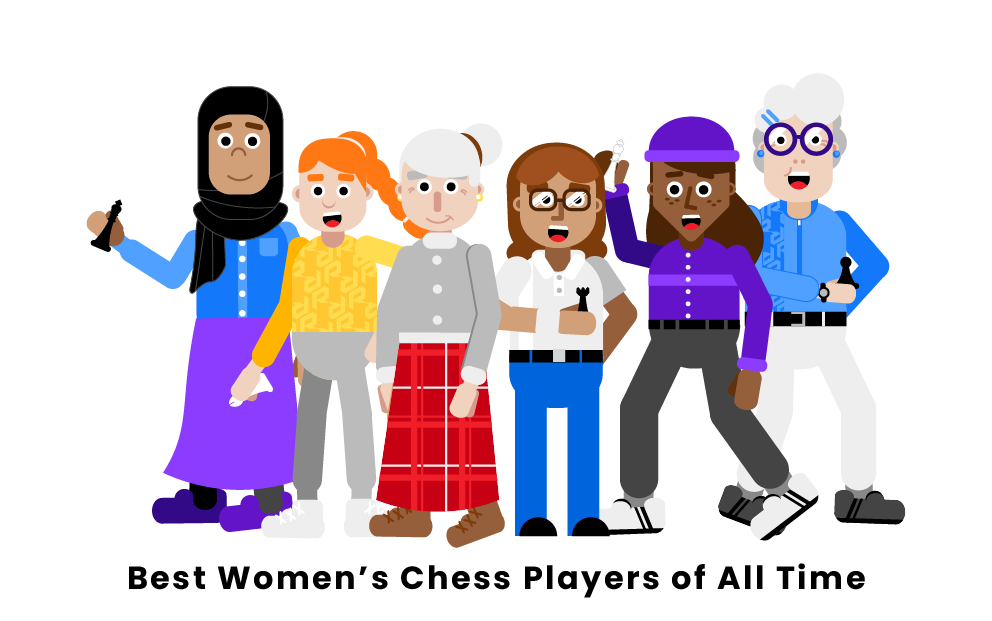 Chess is one of the oldest and most popular board games. Each player has sixteen pieces that are moved on the board to capture opposing pieces. The object of the game is to put the opponent’s king under an attack from which there is no escape. Until the mid-19th century, women were not allowed to play in chess clubs throughout Europe and America. However, since then, women have dominated the game. In 1976, the Women’s Chess Olympiad was added to the Chess Olympiad events with women’s and open tournaments. Below are some of the best women’s chess players of all time.

Who are the best women’s chess players of all time?

Judit Polgár was born in Budapest, Hungary, in 1976. She and her two sisters were taught the rules of the game from an early age by their parents. At just age nine, Polgár won the unrated section of the New York Open. Largely regarded as the greatest female player of all time, Judit has competed against both women and men. She was the youngest Grandmaster ever at just age 15 and held the title of top female chess player for 26 years. Now retired, today Polgár is known for being the only woman to break the top 100 top players, all male, in the world.

Xie Jun was born in 1970 in Baoding, China. She began playing chess at the age of six and was the girls’ champion of Beijing at age 10. In 1991, she became the 7th Women’s World Champion. She won the title again in 1993. Jun is the first female player from Asia to become the Women’s World Chess Champion (from 1991 to 1996 and from 1999-2001). She represented China in eight Women’s Chess Olympiads and won seven team medals. She is known for ending a 41-year Soviet reign on the Women’s World Chess Championship and for her book Chess Champion from China: The Life and Games of Xie Jun, published in 1998 and one of the first game collections from a female chess player.

Maia Chiburdanidze was born in 1961 in Kutaisi, Georgia. At just 13, she played in the women’s international tournament in the Romanian city of Brasov. She won first place and filled the requirements to become an international master. At age 15, she became the champion of the USSR for junior women, and at 16, she won the adult women’s championship. The following year, she defeated Nona Gaprindashvili in the Women’s World Chess Championship to become the new World Champion, defending her title four times but losing to Xie Jun in 1991. Chiburdanidze became only the second woman to earn the honor of Grandmaster in 1984.

Born into a family that taught her chess from an early age (her sister is famed chess player, Judit Polgár), Susan Polgár experienced success early on. She is the oldest of her sisters, born in 1969 in Budapest, Hungary. In 1984, she became the highest-ranking female chess player in the world. She became the third female Grandmaster in 1991. Polgár was the head coach of Webster University’s chess team in St. Louis, Missouri, for nine years. She and her husband helped the team secure seven straight wins in the Pan-American Intercollegiate Chess Championships. She retired from coaching in May of 2021 after a set of injuries.

Born in Xinghua, Jiangsu, China, in 1994, Hou Yifan is the second-most winningest women’s chess player of all time and currently ranked number one. At age 26, she became the youngest Professor at Shenzhen University in the School of Physical Education, which includes chess in its sports training program. Yifan started playing chess as a young child, and at just age 15, shared third place in the open section of the World Junior Chess Championship. She became the fifteenth-youngest person ever to achieve the rank of Grandmaster. In the 2015 Gibraltar Masters, Yifan finished second and achieved a ranking higher than Judit Polgar, ending her 26-year-reign as the number one female player in the world.

Born in Zugdidi, Georgia, in 1941, Nona Gaprindashvili began playing chess at the early age of five. She earned the title of Grandmaster in 1978 after defeating four Grandmasters in the Lone Pine International Tournament in 1977. She also obtained victories in the Women’s Soviet Chess Championship in 1964, 1973, 1981, 1983, and 1985. She helped the Soviet Women’s Chess Olympiad team obtain 11 victories from 1963 to 1990. Gaprindashvili is known for her aggressive style, only agreeing to a draw when all pieces were gone from the board. She began competing with and defeating men in 1962 and has spoken about the prejudice she dealt with involving stereotypes claiming female chess players were inferior to men.

Who is the best female chess player ever?

Judit Polgár is thought of as the greatest female chess player ever to play the game. In 1991, at just age 15, she became the youngest Grandmaster ever. At just age 12, she was rated in the top 100 players in the world. She is the only woman to have ever rated above a 2700, and in 2005, she reached a top score of 2735. Polgar was a member of the 2014 Olympiad team of Hungary that won a silver medal. Over her career, she has defeated 11 World Champions.

Are there any female Grandmasters in chess?

Is Queen’s Gambit a true story?

The short answer is no. While some of the story in the Queen’s Gambit is inspired by real-life chess legends, the life of the main character, Beth Harmon, is made up. Chess legend Nona Gaprindashvili actually filed a lawsuit against Netflix in 2021 regarding her portrayal. If anything, the character Beth Harmon’s story most closely looks like the journey of chess legend Bobby Fischer. Beth won the U.S. Championship in 1967, the same year that Fischer captured the title. Fischer would become a chess champion at age 14, and in the story, Beth does at 16.