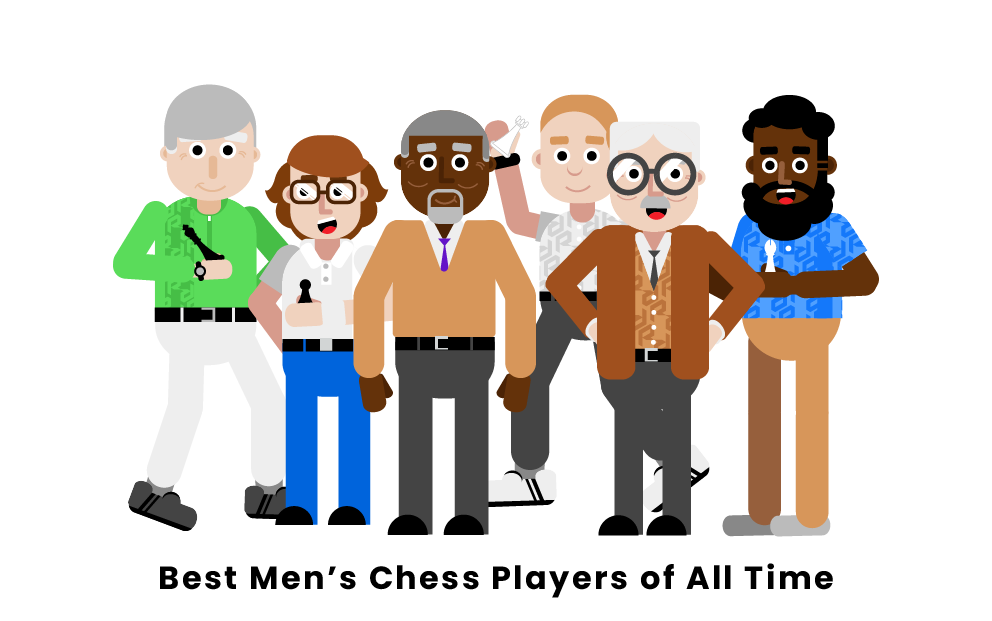 While chess may appear to be a slow or boring game to some, those who love the sport know that it is one of the world's highest and most intense forms of strategy. In order to be a chess master, one must have excellent observational and strategic skills, enough to almost predict what move one’s opponent will make next. In the history of chess, many men and women have excelled enough to achieve the rank of chess master, entering the history books as some of the greatest chess players of all time. Below, we look at the top six best men’s chess players of all time.

Who are the best men’s chess players of all time?

Born in the Soviet Union in April of 1963, in what is now Azerbaijan, Garry Kasparov became World Chess Champion in 1985, becoming the youngest champion in history at that time, at just 22 years old. Kasparov began to play chess at the age of 6 and had achieved the rank of Soviet Youth Champion by age 13. In 1979, at 16, Kasparov won his first international championship, and a year later, he became an international grandmaster. In 1984, he challenged then-world champion Anatoly Karpov, and after a grueling series of 48 matches, in which Kasparov came back from a 5-4 deficit, the contest was ended by officials, with Kasparov protesting. The following year, the two players rematched, and Kasparov successfully defeated Karpov in a 24-game series to become world champion. Kasparov became a world-renowned chess master, and in 1997, he became a part of history by becoming the first chess master to concede defeat to a supercomputer known as Deep Blue.

Though Kasparov retired from competition in 2005, he remains active in chess, writing books on chess champions of the past, as well as on his experience facing Deep Blue, and coaching many upstart chess players. Kasparov also ventured into politics in Russia, forming a political faction to oppose Vladimir Putin in 2005. He ran unsuccessfully as a presidential candidate opposing Putin in 2008.

Well-known to Americans as one of their great chess grandmasters, Bobby Fischer was born in Chicago, Illinois, on March 9, 1943, and first learned the moves of chess at age 6. At age 13, in 1956, he stunned the international chess community by beating International Master Donald Byrne in what was later called “the Game of the Century,” where Fischer dangerously sacrificed his queen on only the 17th move before executing a ruthless counterattack that led to Byrne’s defeat. Three years after the fateful match, Fischer dropped out of high school at 16 to immerse himself fully in chess and went on to win eight American Championships, including one in 1964, in which he became the first and only player to earn a perfect score by winning all 11 of his matches. In 1972, after one failed attempt to become World Chess Champion, Fischer finally achieved the coveted rank by defeating Boris Spassky of the USSR in Iceland. Three years later, in 1975, Fischer lost his title when he refused to meet challenger Anatoly Karpov, causing the FIDE to remove his title by default. Fischer then withdrew from playing chess for 20 years and only reemerged to play a rematch against Boris Spassky in 1992, which he won. Fischer then withdrew from the limelight once again, remaining in the USA until 2005, when he moved to Iceland.

Though some contend that Garry Kasparov and Bobby Fischer will always be the best to play the game, Magnus Carlsen is giving both players a run for their money and currently stands as the five-time reigning Chess World Champion after his latest victory in 2021. After learning chess at age 5, Carlsen first drew international attention in 2004, at the age of 13, when he faced off against both Garry Kasparov and Anatoly Karpov at the same event. Carlsen ended his matches with Kasparov in a draw and defeated Karpov, stunning the onlookers with his prowess. One month later, Carlsen was named the second-youngest grandmaster in history, and in 2009, he became the youngest chess player ever to break 2800, a record which Alireza Firouzja broke in 2021. In 2011, Carlsen captured his first number-one ranking, which he has retained to this day, and in 2013, he won his first World Championship, which he successfully defended four times in 2014, 2016, 2018, and 2021. Carlsen also went on an astonishing 125-game winning streak, which included 42 wins and 83 draws, that ended in October of 2020.

The 12th-ever Chess World Champion, Anatoly Karpov, was born in the USSR in 1951 and began to play chess at age four. He was accepted into the prestigious chess school of former World Champion Mikhail Botvinnik at 12. At age 18, he became an International Master, earning the title of grandmaster one year later. Karpov became World Champion in 1975 after being scheduled to face off against the current champion, Bobby Fischer. However, due to Fischer’s excessive demands, followed by his refusal to appear, the two never played, and Karpov was named champion by default. Karpov remained World Champion for ten years, defending his title many times, including in the grueling 48-game match against Garry Kasparov in 1984. One year later, Kasparov finally defeated Karpov, who lost his decade-long World Championship. Karpov nearly reclaimed the title in 1987 but was again narrowly defeated by Kasparov. Six years later, in 1993, after Kasparov left the FIDE, Karpov regained his World Championship title by defeating Jan Timman. Karpov held the title for another six years, eventually relinquishing it in 1999 when the FIDE chose to hold the World Championships as a tournament rather than a one-on-one match, which Karpov disagreed with. Karpov continued to play in many kinds of chess events after relinquishing his title, and he also ran for FIDE President and involved himself in Russian politics.

Born in 1888, José Raúl Capablanca hailed from Havana, Cuba, where he began to learn chess from his father at age four. In 1901, at 13, he defeated Cuba’s best chess player and went on to attend Columbia University in New York from 1906-1907. In 1913, he left school to become a Cuban diplomat, an opportunity which improved his chess game by allowing him to travel to the various chess capitals of Europe. From 1916 to 1924, Capablanca did not lose a single match in tournament competition and also managed to excel in the sports of baseball, bridge, and tennis. In 1921, Capablanca successfully defeated World Chess Champion Emanuel Lasker. He held onto his World Championship title for six years, eventually losing it to Alexander Alekhine in 1927. Capablanca continued to play and participate in chess until his death in 1942. He was known for the deceptive simplicity of his chess style and is still remembered as one of the sport’s all-time greats.

Born in 1911, Soviet chess master Mikhail Botvinnik is notable for having held the title of World Chess Champion three times in his long career. Botvinnik is the latest bloomer on our list, having first learned chess at the age of 12. However, his late learning did little to impede his prowess as, after only two years of playing chess, Botvinnik impressed the chess world by defeating José Raúl Capablanca (then the world champion) in an exhibition match in which Capablanca was playing multiple people simultaneously.

Botvinnik was known for his methodical and rational style, rather than the more intuitive or natural approaches of other renowned chess players. His many books on the topic of chess influenced future champions such as Anatoly Karpov and Garry Kasparov.

Who is the greatest male chess player of all time?

Arguably, the greatest male chess player of all time is Garry Kasparov, who was the dominant force in the chess world for over 20 years. Kasparov first achieved a number-one ranking in 1984, and he held onto that ranking until 2006. In that time, Kasparov also reigned as the World Chess Champion from 1985 to 2000, a staggering 15 years. In 2000, Kasparov reached the then-unprecedented chess ranking of 2856, a record which was eventually broken by Magnus Carlsen. Kasparov has retired from chess, but his accolades are such that he is still reliably considered the greatest male chess player of all time.

Which male chess player spent the most years as undisputed champion?

The male chess player who held the Word Chess Champion title the longest was Emanuel Lasker, who held the title from 1894 to 1921, a total of 27 years. Lasker was born in Prussia and had a long career of playing and writing about chess, which continued even into his elder years after he lost his championship to José Raúl Capablanca in 1921. Lasker also invented new theories of chess and wrote a book in 1896 entitled Common Sense in Chess, which is still considered a classic of the sport.

What is the highest ranking in chess?

The current chess ranking system, known as the Elo Rating System, was developed by Arpad Elo, a chess master and professor in the United States. The rating system has a number of classes, ranging from Class E at the bottom to Grandmasters at the top. Class E players are given a minimum ranking of 1000, while Grandmasters typically rank at 2500 or above. The current highest ranking in chess is held by Norwegian Grandmaster Magnus Carlsen, who has a current ranking of 2882, the highest rating ever achieved by a human player. Other major chess players with high ratings include Garry Kasparov (2851), Bobby Fischer (2785), and Anatoly Karpov (2780).