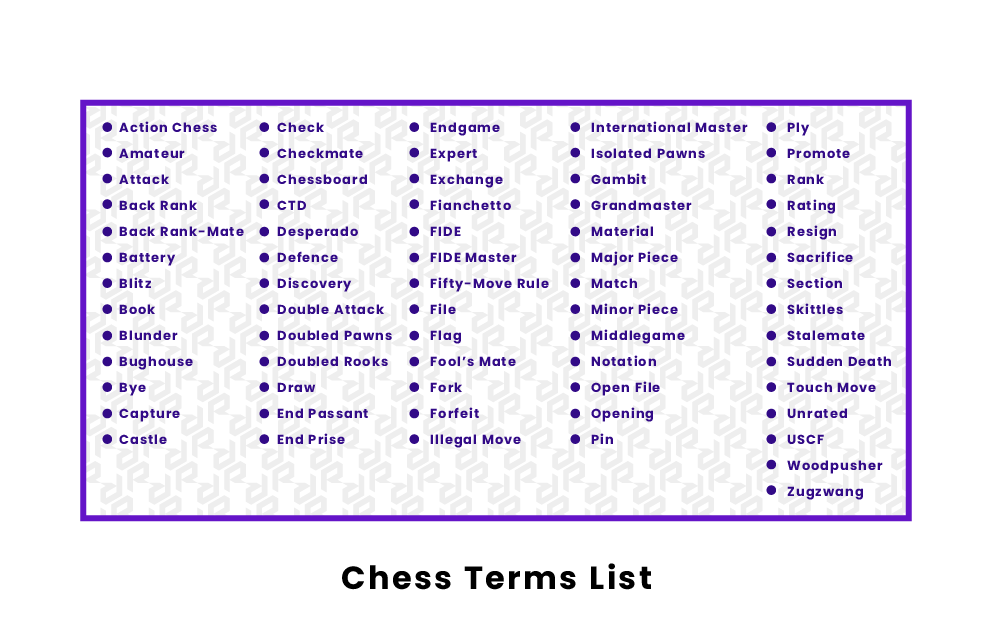 Chess is a complex game with teams comprised of black or white pieces. The goal of the game is to checkmate your opponent. Before you get your first win in chess, it is essential to cultivate your skills, as there are many different techniques and styles based on the player. The list below will introduce you to useful terminology for this ages old board game.

Action Chess: A fast-paced chess game where each player has only 30 minutes to make all of their moves.

Amateur: An amateur in chess does not have a ranking high enough to be considered a master. They are still eligible to win prize money, just not at a master’s level.

Attack: An offensive move where the player moves their piece to a square, enabling them to capture an opponent’s piece in their next move.

Back Rank: The rank where a player will set up his major pieces on the board.

Back Rank-Mate: A checkmate on the 1st or 8th rank made by a queen or rook.

Battery: Occurs when you line up two pieces that move similarly. For example, queen and rook or queen and bishop.

Blitz: Also known as fast or speed chess, a type of game that only lasts about five minutes. Players cannot take time to think and make their moves immediately after their opponent.

Book: A sequence in the opening of a game where a player does not need to calculate his moves but knows the style from memorization.

Blunder: This is a dangerous move that will result in the capture of one or many of your pieces. Too many blunders and you will end up having to resign.

Bughouse: A type of chess where there are two players on each side. A player gets the pieces that his partner captures and can decide whether to put the pieces on their board or not.

Bye: When you cannot play a game but are still playing in the tournament. These do not count towards ratings but can be awarded points.

Capture: To remove a piece from the board after performing a legal move. This is also known as taking, but not killing.

Check: An attack on your opponent’s king. It does not have to be announced but some players choose to verbally say “Check”.

Checkmate: This happens when an attack on the opponent’s king is made and the opponent cannot finish their next turn and no longer have the king under attack.

Chessboard: The board used to play games of chess on. All chessboards have 64 squares in the iconic checkered pattern.

CTD: A nickname given to the Chess Tournament Director.

Desperado: This is when a piece sacrifices itself at a high cost because it was going to be captured later on.

Defence: Either an opening by black or a series of moves to protect a piece from being attacked.

Discovery: An attack by a piece that was opened up by another piece’s move.

Double Attack: Occurs when an attack on two or more pieces is made within a single move.

Doubled Pawns: When two pawns of the same color are on the same file due to a capturing move.

Doubled Rooks: Occurs when two rooks form a battery on a rank or a file.

Draw: Term used when either player does not win the game. The word “tie” is not used in the game of chess.

End Passant: Capturing a pawn that moved two spaces when it could have still been captured had it only moved one space. Can only be performed on the next turn.

End Prise: Capturing a piece for free. This happens when a piece is able to be captured and is not guarded.

Endgame: Known as the ending stage of chess. The king often comes out and attacks because there are no longer many pieces left on the board to protect him.

Expert: A player who has obtained a rating from the US Chess Federation between 2000 and 2199.

Exchange: The occurrence of trading pieces, usually of equal value.

Fianchetto: To develop a bishop on a long diagonal of the board.

FIDE Master: Someone who has earned the lowest international chess title.

Fifty-Move Rule: A type of draw; both players make 50 moves without moving a pawn or making a capture.

File: The rows of a chess board. They are signified by a-h (lowercase letters). “a” will always appear on the left of white and the right of black.

Flag: The part of a clock that rises when the hand is near and reaches the hour mark. To “flag” in chess means that you have lost the game on time.

Fool’s Mate: A variation of the 2-move mate in chess.

Fork: This is a double attack commonly performed by a knight and a pawn. The move makes it appear like a fork in the road on the board.

Forfeit: This occurs when your opponent does not arrive for the scheduled match. You will be awarded the win based on their inability to play.

Isolated Pawns: Pawns that have no other pawns of the same color on adjacent files.

Gambit: This is an opening in chess where a player offers a pawn or more pieces for fast development of the game. It also entails a quick attack on the opponent.

Grandmaster: Someone who possesses the highest international chess title or ranking.

Material: A way in chess to determine the value of a piece. Also known as winning a pawn.

Major Piece: A queen or a rook is known as a major piece in chess.

Match: A series of games between two players.

Minor Piece: Bishops and knights are labeled as minor pieces in the game of chess.

Middlegame: The portion of the game that takes place after the opening and before the endgame.

Notation: Players documenting their movements on the chessboard in writing. It requires writing down file, rank, and piece.

Open File: A file with no pawns of either color.

Opening: The start of a game of chess, which usually is measured by a dozen moves.

Pin: This is an attack by a rook, bishop, or queen on a piece that cannot or should not move. They should not move because the piece behind them is more valuable. If the piece is protecting a king, it is not allowed to move or else the king will be put into check.

Ply: A half-move, or the move of one player. Once both players perform a move, it is known as two ply, or one full move.

Promote: When a pawn reaches the other side of the board. Once reaching the 8th rank, it can promote itself to a queen, rook, bishop, or knight on the corresponding promoting square.

Rank: The rows on a chess board. They are numbered 1st-8th with the 1st starting on white’s side.

Rating: A measure of skill provided by the USCF. They range from 0-3000, and most players begin around 400. This determines what kind of tournaments you can enter and your overall skill level.

Resign: This is when you knock over your king, signaling that you lost the game. Shaking hands does not signify the end of a game, you must say that you resign in one way or another.

Sacrifice: The intentional loss of a piece in order to get a better result further into the game.

Section: The portion of a chess tournament where players are matched up against each other. This may be organized due to rating or other metrics.

Skittles: This is chess played for fun or without a clock. Many players will play Skittles as they wait for their next game during a tournament. It is a good method in order to keep your brain fresh while waiting for your next opponent.

Stalemate: When a player is not in check but none of his pieces can move legally. This is a type of draw in chess, although not all stalemates are draws.

Sudden Death: Usually a 20 minute round where a game between two players must be completed.

Touch Move: This is a rule in chess that says if you touch one of your pieces you have to move that piece. Also, if you let go of that piece you have to leave it where it is.

Unrated: A player who has not participated in a rated game, or does not have a rating from the USCF.

USCF: The abbreviation for the United States Chess Federation.

Woodpusher: A nickname given to a weak chess player.

Zugzwang: This is the obligation to move your piece that will end in a bad result no matter what.