How Many Moves Do Chess Players Think Ahead? 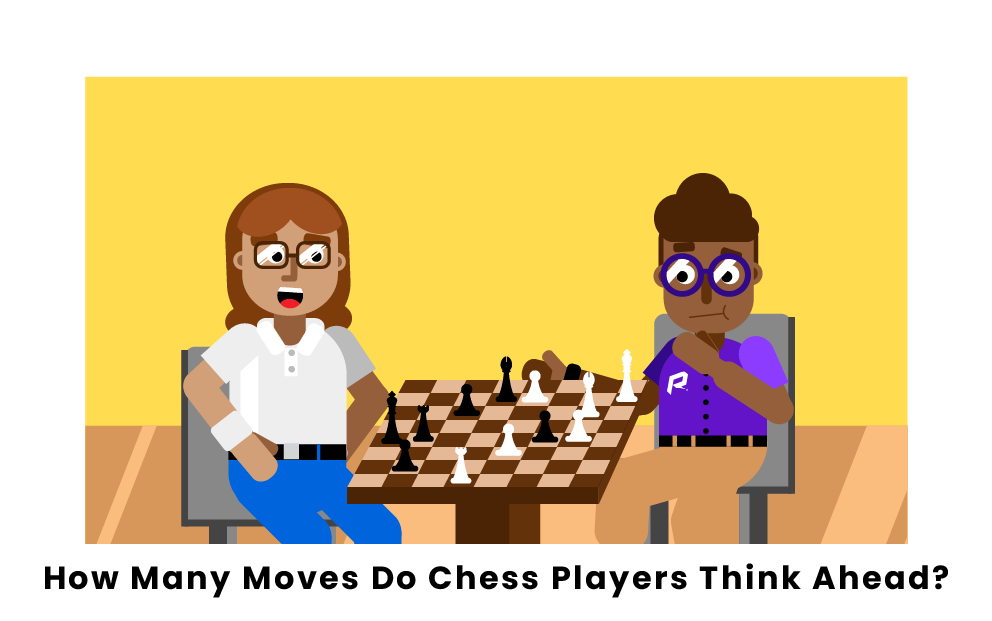 Most people know that chess depends upon players being able to think ahead and predict their opponent’s moves to win, but how many moves can chess players actually think ahead? As with any sport, chess players of greater skill have been shown to possess the ability to think many moves ahead, sometimes up to a dozen or more. However, in most cases, even chess grandmasters tend to think ahead in smaller intervals to keep the game from getting too complex. Here, we will look at how many moves the average chess player thinks ahead and how higher-ranking players think.

How Many Moves Do Average Chess Players Think Ahead?

The standard for what makes a novice chess player is usually determined by the Elo Rating System. This numerical scale ranks chess players based on skill, running from 1000 for beginners to over 2500 for grandmasters. A novice chess player usually falls within the five lower classes of the Elo System, Classes A to E, which starts with Class E (1000-1199) at the low end and ends with Class A (1800-1999) at the high end.

Novice to average chess players are often known for their ability to see anywhere from one to three moves ahead in a chess game. True beginners at the game often do not yet have the skills to see ahead at all, but once players begin to pick up skills like understanding the structure of the board, the movements of the pieces, and how to perform captures, they will begin to see how their opponent strategizes, and begin to predict moves and develop plans.

Most average chess players retain the ability to see one to three moves ahead in a game, even if they have played chess for many years. This is mostly because thinking ahead requires a lot of meticulous skill. Many average chess players, including most normal people, do not have the unique vision of the few natural chess masters in the world.

How Many Moves Do Master Chess Players Think Ahead?

The most common method of seeing ahead for grandmasters and other skilled chess players is to analyze various potential strategies an opponent may employ. Rather than looking at one strategy and following it for 15 or more moves, most grandmasters will think deeply about three or four potential plans an opponent may try to enact, predicting the next few moves for each strategy. The master will then predict which of those strategies their opponent is most likely to choose and make their move based on countering that strategy. In general, this is a more effective means of winning because it does not merely focus on one potential outcome but on many.

How Do You Learn to Think Ahead in Chess?

When looking at a chessboard or when seeing two skilled chess players face off against each other, many average players may feel discouraged, thinking that they could not possibly learn how to think ahead like a chess master. While it is very difficult to cultivate this skill, it is certainly not impossible. Learning how to think ahead in chess rests upon understanding how thinking ahead actually works, and then practicing it extensively.

In basic terms, thinking ahead in chess simply involves a player looking at the entirety of the chessboard, visualizing themselves making a certain move, and then calculating how their opponent would best respond to it. The key aspect of thinking ahead in chess is being aware of where all of your opponent’s pieces are and knowing how they can move. For instance, one might see on a chessboard that an opponent’s knight is available for capture by their queen, but then also notice that the opponent’s queen is in a position to attack the square where the knight currently is. In such a case, the player would be thinking ahead by not capturing the opponent’s knight, as they know that this will cause them to put their queen, a much more valuable piece, in danger.

There are many good ways to begin practicing thinking ahead in chess. One such method is correspondence chess, where two players engage in a match by mail, sending their moves back and forth to each other, which gives each player a lot of time to think and strategize. Another method is to memorize the squares on the board with memorization exercises, which will help aid in visualization. A final method is to take online or in-person chess lessons, practice chess puzzles on the Internet, and simply play as many games of chess as possible.

Looking ahead for possible moves is one of the fundamental aspects of a game of chess. Players who can master this ability and improve it to the point of seeing many moves ahead can often see great improvements in their quality of play, and the fostering of these mental skills is also beneficial to one’s mental strength in other areas of life.

Pages Related to How Many Moves Do Chess Players Think Ahead?