How Does Chess Notation Work? 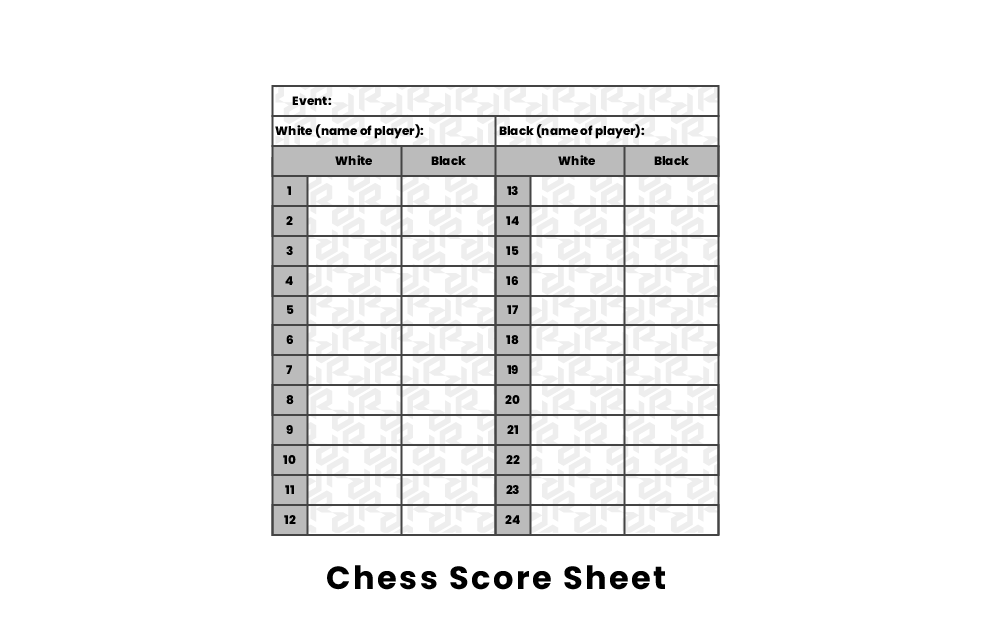 Chess notation is the language of recording chess games that have been played. The notation is in list form, with the number indicating which turn set it is and the following notation describing what happened on the board during that turn set.

Pieces will either be moved or captured during a turn set, and chess notation acts as a log to keep track of the action. While chess notation may appear to be confusing at first, it is a simple language to learn if you generally understand how the game of chess is played. Chess notation is helpful for studying famous games throughout history and keeping track of a player’s own games. 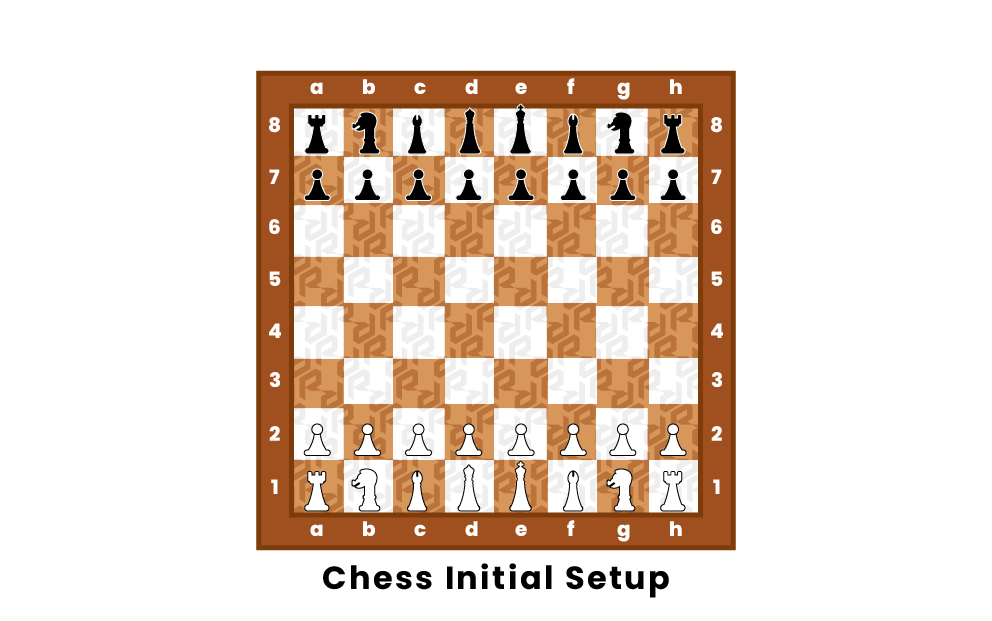 When pieces move forward and backward, they are moving up and down a column, or file. Each of the eight files is assigned a letter, a-h, denoted by a lowercase letter. The kings of each player always start on the “e file,” for instance. When pieces move from side to side, they are moving along a row, or rank. Each of the eight ranks is assigned a number, 1-8. White’s pawns always start on the second rank, while black’s pawns always start on the seventh rank. As every file has a letter and every rank has a number, each square on the chessboard has a unique designation, consisting of a letter and number. Simply pick a square, and see where the file and rank intersect to name it. When naming a square, the letter designation of its file always comes before the number designation of its rank. 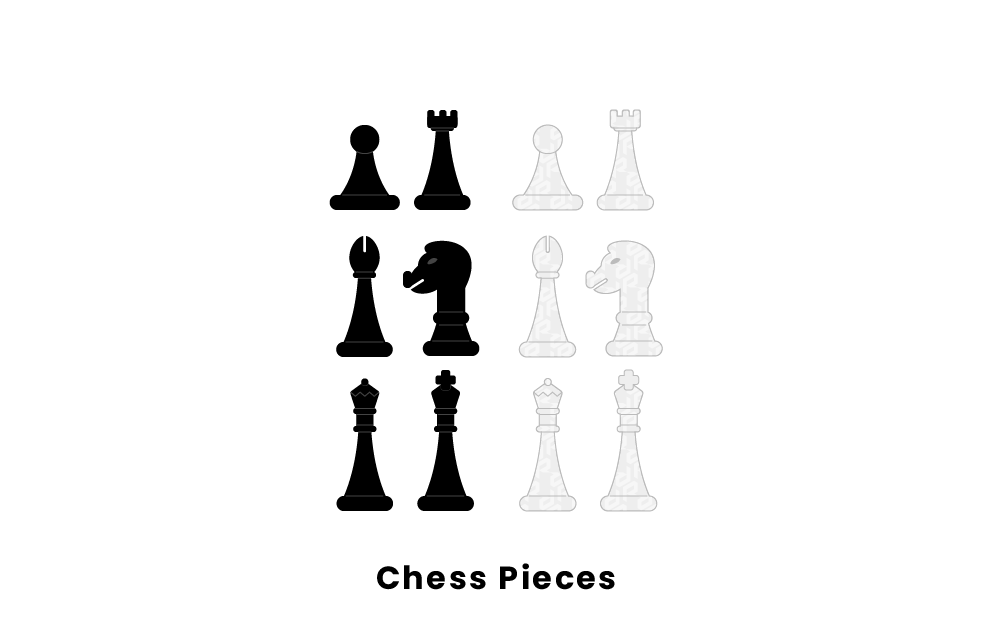 A chess set contains unique pieces, all with different rules on how they are allowed to move around the chessboard. In chess notation, each piece is assigned a single letter so that it can be logged quickly. The king is denoted as “K,” the queen is denoted as “Q,” rooks are denoted as “R,” bishops are denoted as “B,” and knights are denoted as “N” because “K” is reserved for the king, and the phonetic pronunciation of knight is with an “n” sound. Finally, pawns do not get a designation; they are simply referred to by what file they are on.

Once you understand how the squares on the chessboard are named and the symbols assigned to each piece, it becomes easy to understand how Chess Notation logs the movement of pieces. One important thing to note is that in chess, white always moves first. Therefore, during a turnset, there will always be two moves, white’s then black’s. As an example, here are how the first two turnsets of a popular chess opening would look in chess notation:

On the first turnset, denoted by the “1”, white moved the pawn in front of their king forward two spaces. Remember, a pawn is only designated by the file that it occupies. Since pawns start on the second rank, we know that “e4” means that the pawn on the “e file” was moved forward two ranks and now occupies “e4.” Now it’s black’s turn, and they chose to mirror move the pawn on their “e file” forward two spaces as well. Since black’s pawns start on the seventh rank, we know that “e5” means the pawn was moved forwards two spaces as well. Now that both players have made their first move, we move on to the second turnset, denoted by the “2.” For their second move, white chose to move their knight to “f3.” Therefore it is denoted as “K” (knight) “f3” (the square the piece now occupies). On their turn, black chose to move their knight to “c6,” which is denoted as “K” (knight) “c6” (the square the knight now occupies).

One of the key aspects of chess is capturing your opponent’s pieces. Captures are logged in chess notation with the symbol “x.” As an example, let’s look at the first two turnsets of the Scandinavian Defense:

Here, white moves their pawn on the “e file” forward two spaces. Black responds by moving the pawn on their “d file” forward two spaces, putting it on an attacking square of white’s pawn. On the second turnset, white chooses to capture black’s pawn with his own denoted as “exd5.” Breaking it down: “e” (the pawn on the “e file”), “x” (captures), “d5” (on this square). With their second move, black captures white’s pawn with their queen, denoted as: “Qxd5.” Breaking it down: “Q” (queen), “x” (captures), and “d5” (on this square). It is important to notice that the piece being captured is not denoted, only where the capture takes place is logged, as we already know what piece occupies that square from earlier in the notation when it was moved there.

Which Piece Did What?

As each player has two rooks and two knights, sometimes situations arise where they could both move or capture on the same square. If both knights, for instance, could move to “e5,” simply denoting “Ke5” would not provide enough information. Which knight moved? To solve this problem, denote the letter of the file the piece that moves is on. Therefore if both knights could move to “e5”, and one knight was on “f3” and the other was on “c4,” and the knight on “f3” is the one that moved, it would be denoted as: “Kfe5.” Or, if the knight on “c4” was the one that moved, it would be “Kce5”. The same is true if the two knights were to be capturing something on “e5.” It would simply be “Kfxe5” or “Kcxe5”.

Another important thing to denote in chess notation are checks when the king is under attack, and checkmate, when the winning blow is delivered. Checks and checkmate are each designated by a special symbol in chess notation. Check is denoted by “+,” and checkmate is denoted by “#.” These symbols are placed at the end of a move or capture, indicating that move also has an effect on the king. An example of a check would be “Bb5+,” meaning that when the bishop moved to “b5” it came with an attack on the king. An example of denoting checkmate would be “Qxg7#,” meaning that when the queen captured a piece on “g7,” it also ended the game.

If a pawn makes it all the way to the other side of the board, it gets promoted to a piece of the player’s choosing. In chess notation, this is denoted as “=.” An example would be “c8=Q.” This means that a pawn reached the end of the board on “c8” and was promoted to a queen.

Pages Related to How Does Chess Notation Work?