Do You Always Promote A Pawn To A Queen? 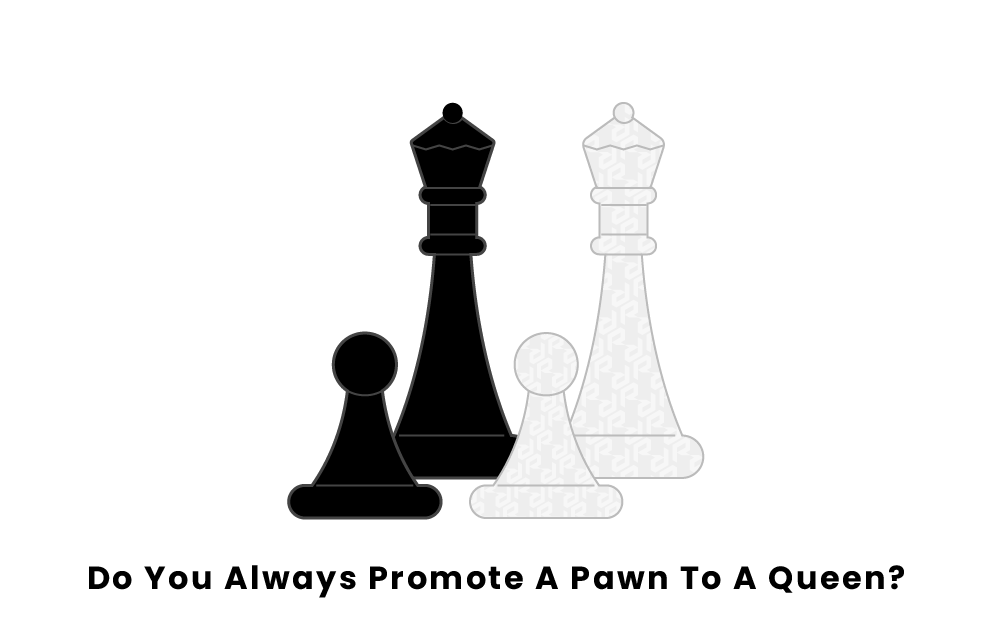 Pawn promotion is one of the key rules of chess and often saves many a game from the brink of defeat or clinches a match that was already going well. Most chess players know that the typical form of pawn promotion is from pawn to queen, but is this always the best choice? As it turns out, there are a few cases where promoting a pawn to a queen is actually unwise. Here, we will take a look at pawn promotion and discuss when it is more sensible to “underpromote” a pawn to a rank lesser than a queen.

What is Pawn Promotion?

The rules behind pawn promotion in chess are very simple. According to these rules, whenever a player’s pawn manages to advance the full length of the board, reaching the back row of the opponent’s pieces, that pawn can be promoted to the rank of any greater piece besides a king. This means that pawns that reach the back row of the board can become a bishop, knight, rook, or queen and that when they are promoted, they gain all of the abilities of the piece they are promoted to.

Naturally, when it comes to promoting pawns, the vast majority of chess players tend to promote all of their pawns to queens, which is known in chess as “queening the pawn.” The reason for this is because the queen is the most powerful piece on the chessboard, with the ability to move any amount of open squares in any direction, be it horizontal, vertical, or diagonal. When considering the queen’s power, it might seem foolish to promote a pawn to anything less than a queen at any time. Still, as we will see below, there are some cases where it is wiser to promote a pawn to the rank of bishop, knight, or rook, known as “underpromotion.”

When Should Pawns be Promoted to Ranks Other Than Queen?

If it is true that promoting pawns to queens can sometimes be a bad decision, when is this most likely to be the case? The most common scenario in which promotion to a queen becomes unwise is when there is the possibility of an immediate stalemate. A stalemate occurs whenever an opponent’s king is not in check, but the opponent also has no legal moves to make. This results in a draw, which means that neither player wins or loses the game.

A stalemate by promotion to queen can occur in many scenarios, such as if an opponent’s king is trapped in Column H by enemy pieces such as queens, rooks, or kings. For example, the king cannot advance out of Column H because their enemy’s pieces are located in the ranks below and to the side, which would result in a check. If the attacking opponent has a pawn that they can promote, such as in square f7, they may decide to promote to a queen, but in doing so, they will actually cause a stalemate. This is because, by placing a queen in square f8, they will not be checking the opponent’s king and will not be allowing them any legal moves.

In this scenario, the better idea is for the attacking player to promote their pawn to a lesser-ranked piece, such as a knight. If the player promotes their pawn to a knight instead of a queen, the knight may place the opponent’s king in check. Thus, the king will be forced to escape check by moving to the first rank, allowing the player to achieve checkmate by simply moving their queen to block escape. Here, underpromoting the pawn was a smarter play than promoting it to a queen, as the underpromotion forced the opponent’s king into a position to be checkmated.

Strategy and observation are the most important skills in chess, and one of the scenarios in which these abilities prove most important is in the promotion of pawns. Lower-ranking chess players may often make the simple mistake of promoting all of their available pawns to queens, but a wise player of the game will always analyze the pieces on the board, considering whether going for the piece with the greatest power is actually the most prudent option or a simple but costly error.

Pages Related to Do You Always Promote A Pawn To A Queen?