If you have been to a sporting event, you may have noticed a group of people chanting and performing stunts while cheering on their team. These are cheerleaders. It is a sport that combines dance and acrobatics to entertain the crowd during sporting events. It has often been considered a sideline sport, but has evolved into intense competitions and tournaments. Cheerleading is considered an iconic part of American culture, and expanded all over the world. 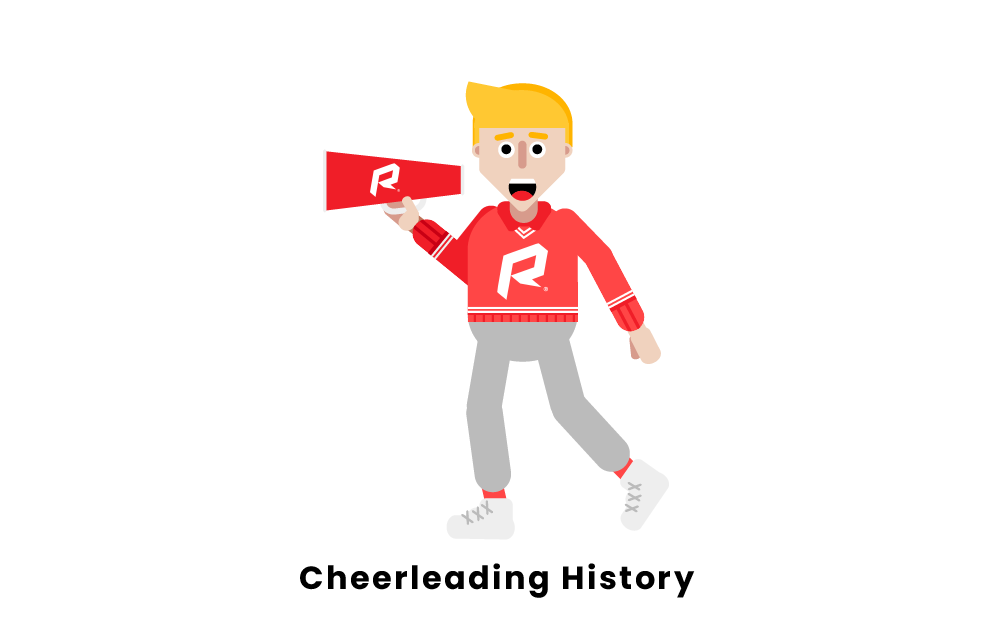 Although cheerleading is considered to be feminine, it first started off as a male dominated sport. During the 1880s, Princeton formed an all-male pep club that helped energize the team and crowd. Thomas Peebles, a graduate of Princeton, then took those cheers to the University of Minnesota where football fight songs were becoming popular.

Women were not permitted to be cheerleaders until 1923 at the University of Minnesota. During the next decade, dances and acrobatics were incorporated into their routines. From then on, the sport changed forever.

During the 1980s and 90s is when All Star Cheering started. This incorporated competition performances into the sport.

Playing surfaces can vary depending on what type of resources the cheerleading organization has. However, spring floors or foam floors with landing mats are the playing surfaces that are traditionally used. A study done by Florida Gulf Coast University found that those two surfaces were the safest to perform and practice on. They have the most shock absorption capabilities out of all the other surfaces they studied, and could possibly reduce the chance of traumatic brain injuries. 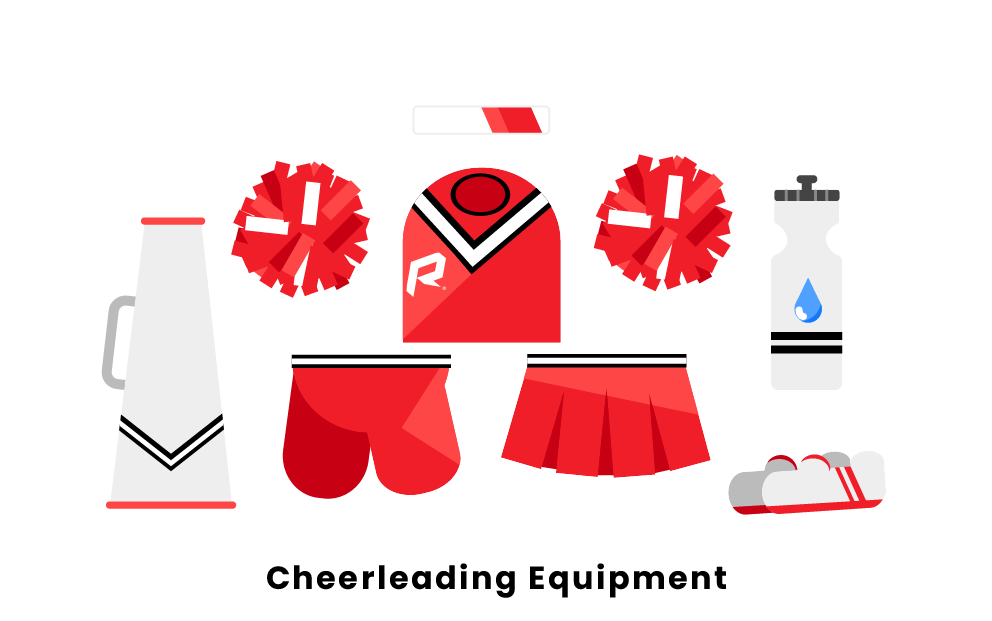 You can not cheer without the proper equipment, so this is a list that covers the most important ones to have: 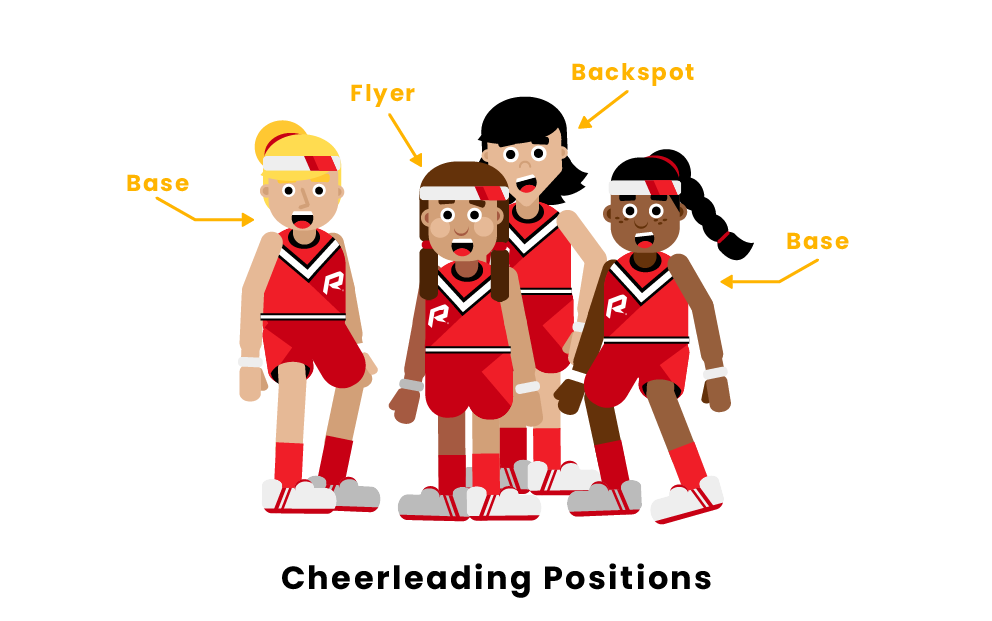 In cheerleading there are different positions and responsibilities when it comes to performing stunts. Each position plays an important role in the safety of cheerleaders, and the execution of the stunts. Here are the three main positions:

Base: A base is a person who throws the flyer up in the air and holds them up. Bases are typically tall and strong, and must be in sync with the other bases so the flyer gets thrown properly

Flyer: A person who gets lifted and thrown in the air, and must sometimes perform acrobatic stunts

Spotter: The spotter is responsible for balancing the stunt and catching the flyer if they were to fall 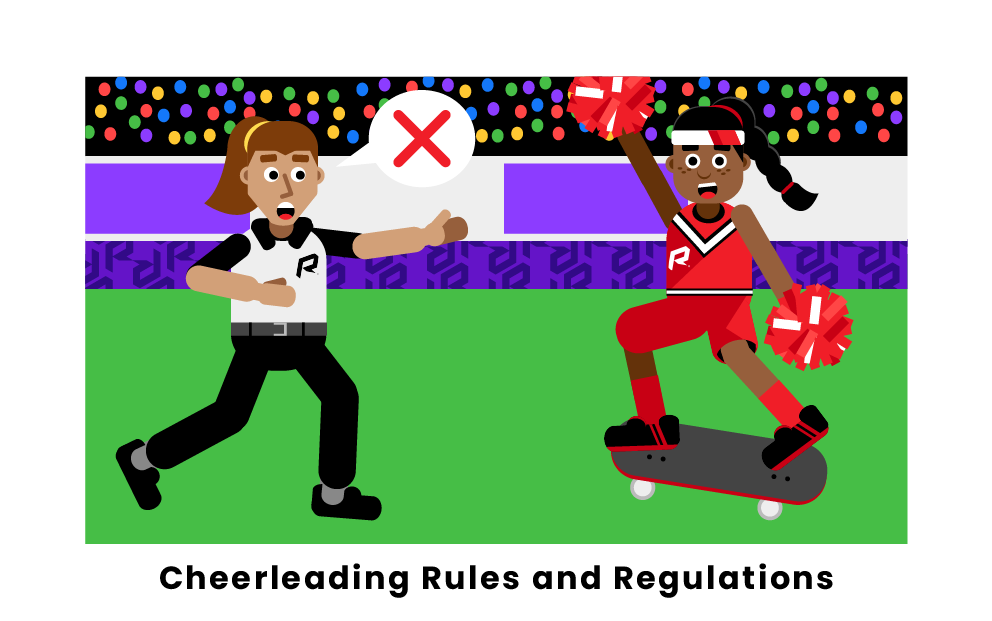 Cheerleading is a competitive sport, so there are certain rules enforced that help with safety and fairness during competition. Here is a list of general rules: 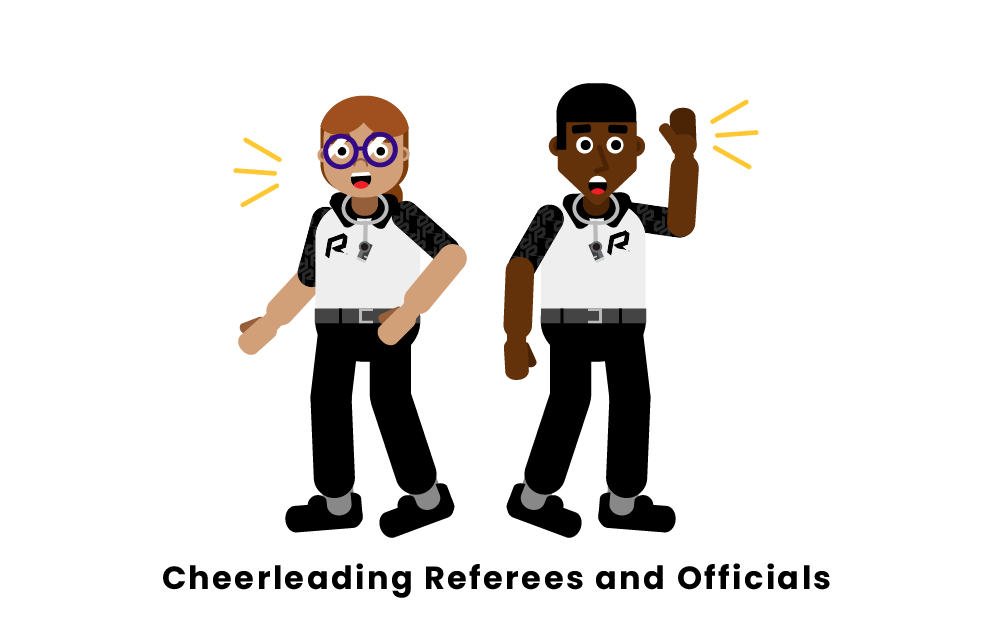 In order to enforce these rules, referees must be at these cheerleading competitions. They are also known as stunt officials. To become a stunt official, they must be certified through USA Cheer, and to receive a certification they must complete a thorough official's training course and exam. During a competition, officials are equipped with a scorecard that lets them judge the two teams who are playing against each other. 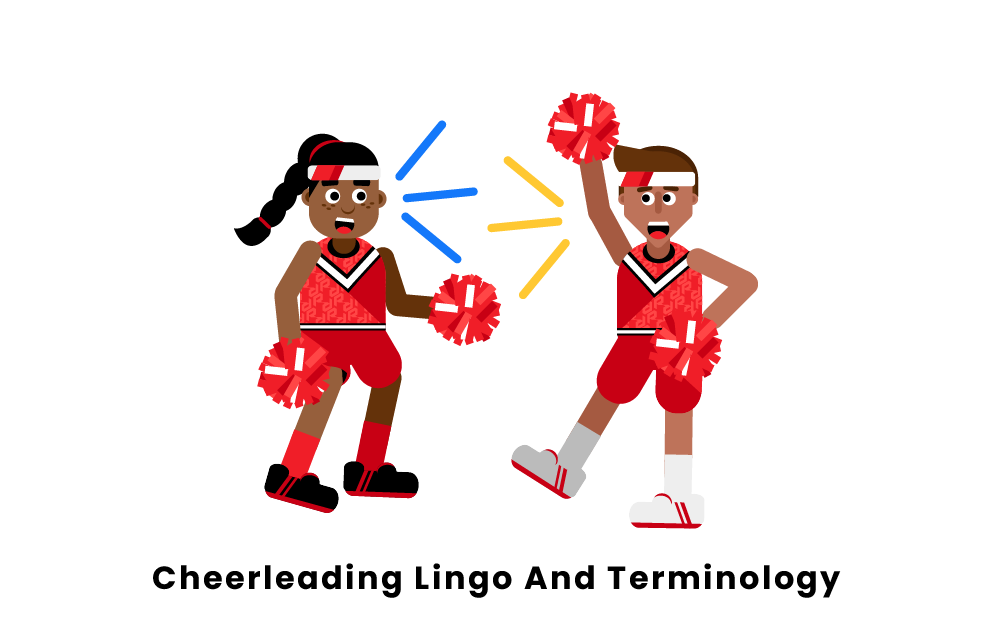 Being involved in cheerleading culture means you should know some language that people use while in competitions and practices. Here is a list of lingo and terminology:

All Stars: Cheerleading team that is not associated with the school

Captain: Leader of the team

Cheer: A longer yell that usually involves stunts, pom pons, or other motions

Choreography: An order of dance steps and movements

Routine: When a squad uses cheers, chants and dances for a continuous display of talent that lasts 2:30-4 minutes

Sell It: When facials or attitudes are exaggerated to give the performance more appeal

Suck it Up: When a flyer is up on a stunt, try to hold and not fall

Varsity: Upperclassmen that represent the school

Anybody who has watched a cheerleading competition knows that there are various skills one should practice and master in order to become great at what they do. Here is a list of some of those skills and techniques:

Aerial: Cartwheel done without touching your hands on the ground

Arabesque: One leg is straight and the other is pointed back 90 degrees

Back Handspring: Backwards jump on your hands, then moving from your hands to your feet

Banana: Arching your back and reaching upwards

Basket Toss: When 3 bases throw a flyer and 2 of them link arms to catch them while one spots the stunt

Candle Sticks: Motion where you stick your arms out in front of you and face your fists towards each other

Deadman: Flyer falls forwards or backwards out of a stunt

Mount: When one or more cheerleaders are supported in the air

Pyramid: Multiple mounts next to each other

Stunt: Any skill that involves mounting, tumbling, a pyramid or toss 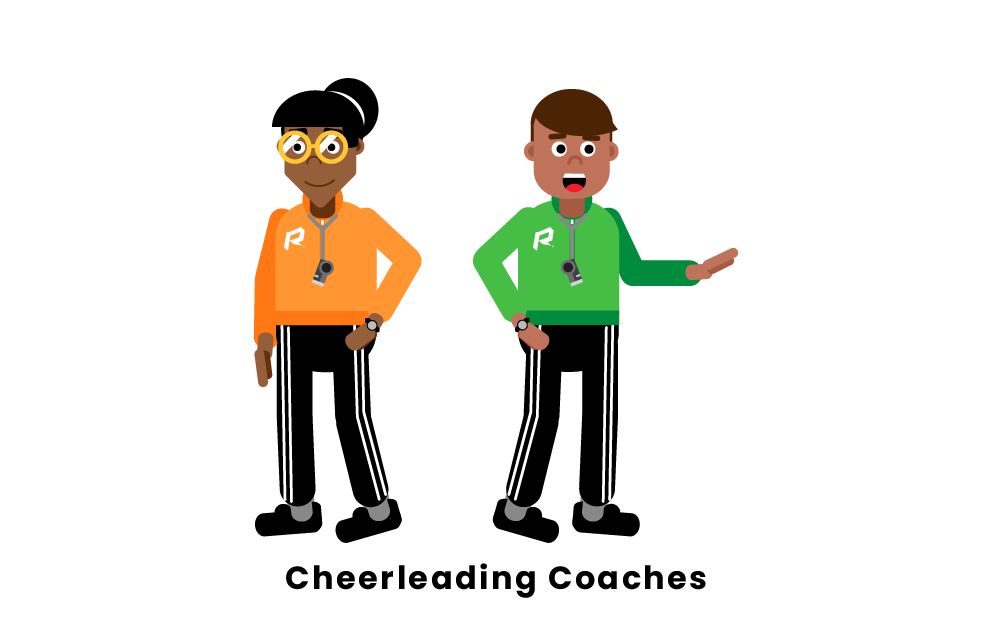 The sport is carried by its players and coaches. A notable coach in cheerleading is Tony Nash, the USA All Girl Head Coach who has won nine straight World Championships from 2009-2017. Another illustrious coach is LeRoy McCullough, the USA Coed Team Head Coach, who won six straight World Championships from 2011-2017. Here are some of the players they are currently coaching.

In order to become a cheer coach, it is helpful to have a background in cheer, dance, gymnastics, or acrobatics. You should also have certifications in CPR and First Aid.

Strategizing for your squads success can be a catalyst for success. Here are some strategies coaches can use throughout their season:

Knowing the Score Sheet/ Scoring System: It is very beneficial to plan the season a year in advance and practice routines your team will be doing during National events.

Try your hardest to Perfect Stunts: Technique is a key element to judges giving your squad high scores, so make sure you work on the areas you are lacking in. 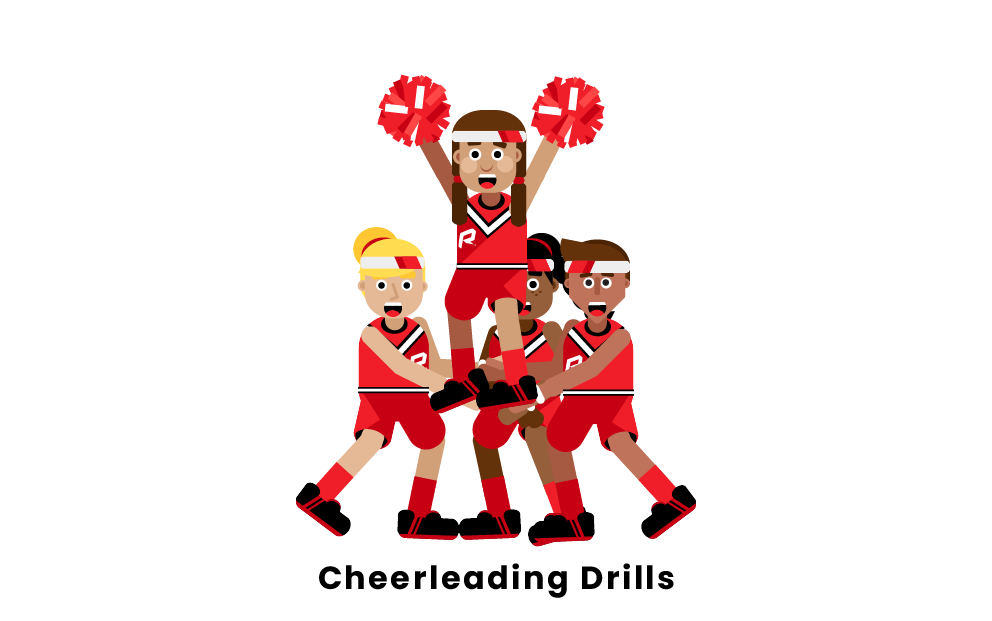 Practice makes perfect, and that goes for cheerleading as well. Coaches and trainers have come up with drills to enhance your skills as a cheerleader. These will improve your flexibility, strength, power and overall confidence when performing.

Catch Squat: Start with your arms on your side, small jump with your arms above your head, legs together and knees bent. During the second jump you open your legs up and go down into a squat while your arms remain in the air.

Headstand: With your forearms on the ground and hands slightly covering your head, swing your legs up into a headstand.

Jump Kicks: Arms to the side, use one leg to kick up fast to the arm on the same side.

Rebound Jumps: Squat down, swing your arms up and jump up as high as you can and land back down softly on the balls of your feet with your hips back.

Rotating Points: While laying down on your back, keep one leg down and move the other up and sideways in a repeated way.

Although cheerleading is not an Olympic sport, the International Olympic Committee has given it a provisional status which allows organizations to be funded for a three year period. While organizations receive funding, cheerleading can petition to be fully incorporated into the Olympic games. Sixteen sports applied for the provisional status last year, and among those that got accepted were muay tai and cheerleading, increasing the total number of recognized Olympic sports from 35 to 37.

Players and athletes of cheer teams are the anchor that holds the sport down. Here is a list of notable cheerleaders on different United States national teams.

Cheerleading leagues are used to provide athletes with competition and even education about the sport. Each league can have its own distinct rules so you should look at their websites to see when they hold competitions and what services they provide. 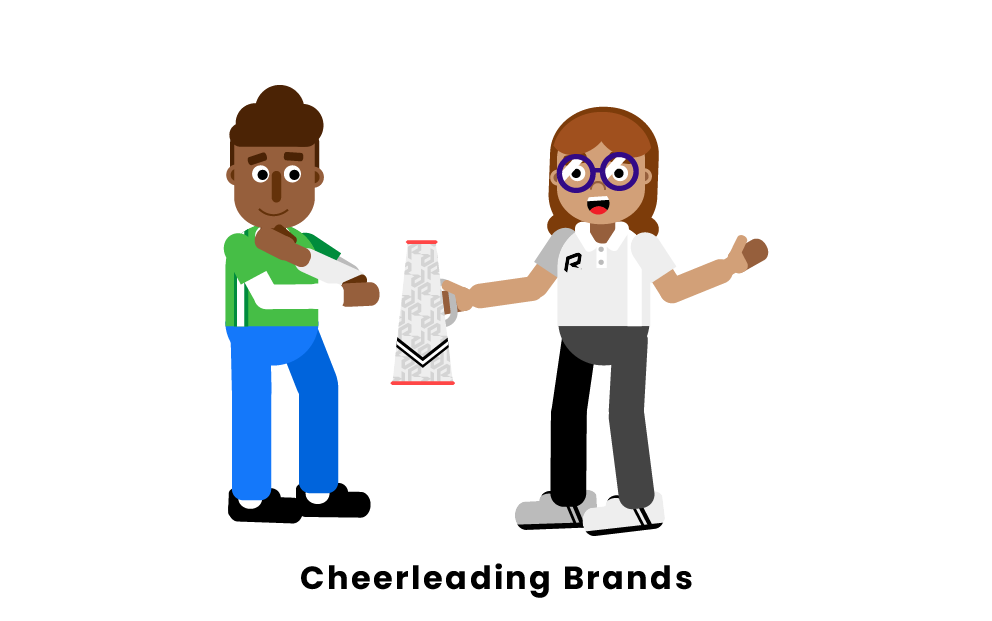 In order to perform to the best of their ability, cheerleaders should have comfortable clothing and accessories that allow them to maneuver however they want during a competition. Here is a list of trusted brands where you can buy your gear down below.

Many cheerleaders participate in the sport from an early age. As a result, they learn about the sport, and progress their skills when they are young, and that allows them to be great athletes in the future. This is not possible without youth organizations, so here is a list of them down below.

So you have been preparing all year. Constantly practicing with your squad to perfect your stunts, motions and movements, and now it is time to sign up for a tournament! The tournaments listed below all vary in level and age, but they are also extremely competitive and popular. Tournaments are where the best athletes in the world come to perform with their squad and win that first place trophy. Here is the list of tournaments: 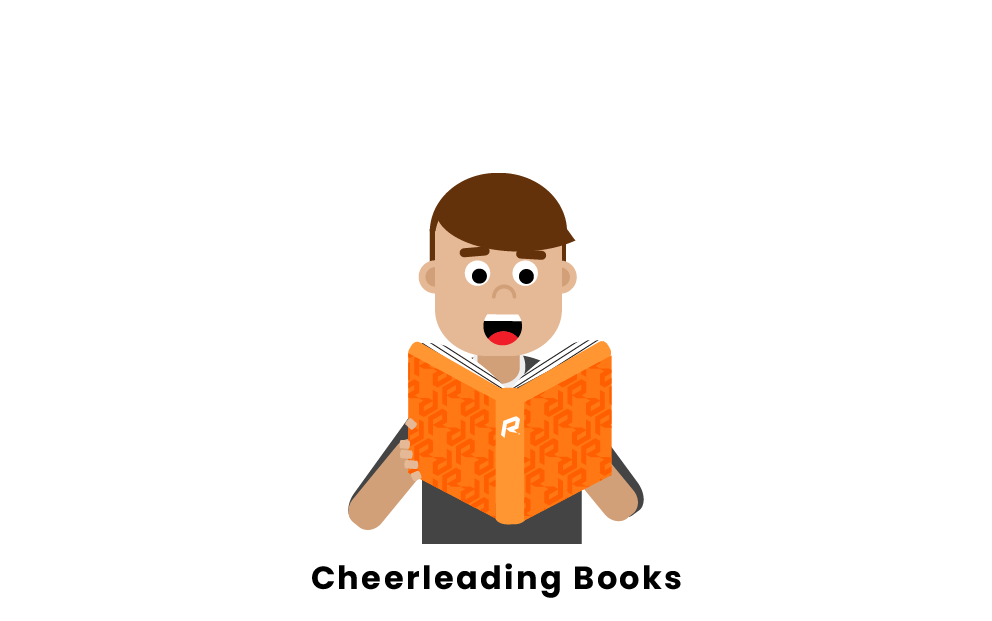 The sport is also home to a countless amount of literature that covers cheerleading, people's experiences in the sport, education and many more topics. Here is a list of some cheerleading books:

With the internet at most people's fingertips, information is not hard to come by. Different cheerleading websites can provide vital information about cheerleading education, competitions, tournaments, coaching, apparel and news. Here is a list of reliable websites with all that information.

Yes, cheerleading is dangerous. A study ranked cheerleading as the 16th most dangerous sport. This is largely because of the high risk for concussion and catastrophic injuries. Injuries at the ankles, knees and wrists are also common because of the repetitive running, jumping and landing that cheerleaders have to endure.

The first cheer team was formed by Princeton University in the 1880s, who formed an all-male pep club. These pep clubs were used as a form of crowd control. They were used to make the fans and teams enthusiastic while watching and playing the game. This is why cheerleading is so closely tied to football. Johnny Campbell is recognized as the first person to pick up a megaphone and organize a cheer at a football game, and the rest is history.

Is cheerleading a sport?

Whether people like it or not, cheerleading is absolutely a sport. The Women's Sports Foundation has narrowed the definition of a sport to these elements:

Cheerleading checks off all those boxes. There is physical activity involved in the sport, competitions occur every year, the sport is governed by rules and regulations, and they are nationally televised.

Pages Related to What is Cheerleading?