What are the rules of cheerleading? 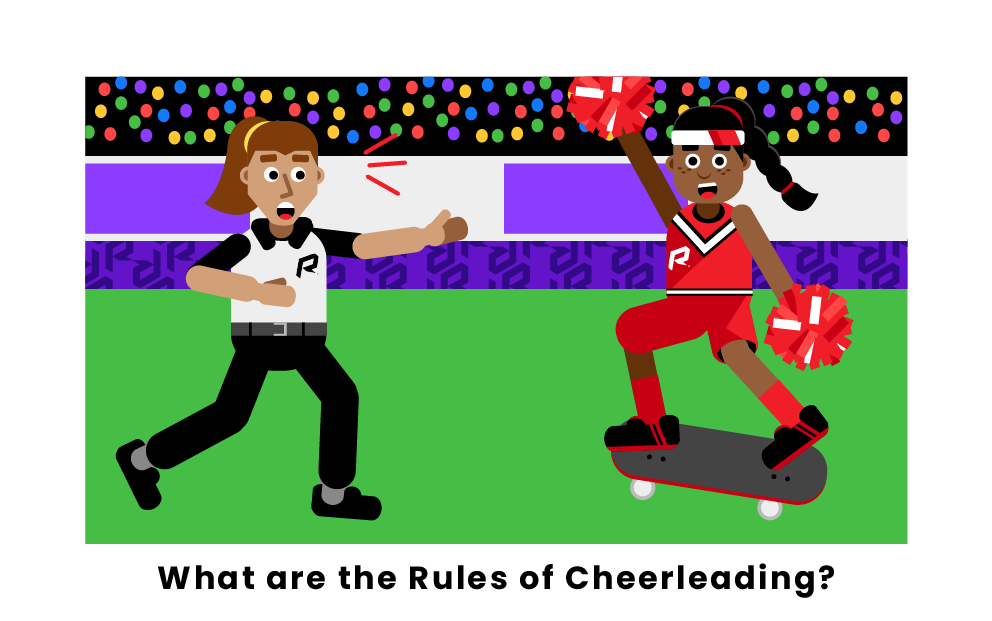 Cheerleading is a well known sport due to its popularity in schools and sporting events, but many people aren’t familiar with the rules for competitive cheerleading. Cheerleaders are doing some serious tricks at these events and need to follow some rules in order to keep the sport as safe as possible. These rules will change depending on the level of competition.

There are cheerleaders of many different ages and in order to keep them safe, the rules are divided into different levels. This restricts the harder level skills from being attempted by younger kids since they could get hurt performing the skills before they are ready.

The USA Cheerleading levels are divided between Youth Rec Sideline, Junior High/Middle Schools, High School, College, and All Star Cheerleaders. All Star is a club team for cheerleading that focuses solely on competing. All Star teams are available at all ages and are further split up into 7 levels. Each of these divisions have unique rules for performances at games or in competitions.

Before each competition there are score cards that tell athletes what skills the judges are looking for. These skills should be incorporated into the routine and any illegal skills should be removed in order to avoid any deductions.

For All Star competitions, the judges go through serious training in order to be an eligible judge. Judges also have to keep up on changes made to the rules each year based on different skills and such.

Judges go to competitions and watch routines closely to see how skills are performed, how difficult they are, and how cohesive the squad was throughout the performance. They judge based on the different skills like tumbling, stunts, pyramids, and tosses. All skills will be given points for the difficulty and the execution of a skill. Additionally, more points can be earned for how creatively stunts and pyramids are performed.

The athletes are also scored based on their sportsmanship, presentation, and the overall routine. In the end, the total score is out of a max of 100 points. For lower levels where certain elements like tosses are not allowed in competitions, the max score may be a bit lower.

As mentioned earlier, the specific rules vary by each level. However, there are some general rules that hold for all competitions.

All squads must have a qualified coach who makes sure to uphold the rules of cheerleading in practice as well as competitions. The coach has to make sure that athletes or squads don’t move on to a more difficult skill until they have gained proficiency at the prior skills. Also, cheerleaders are only allowed to do stunts listed as allowed for their level or ones that are allowed in earlier levels. When practicing new skills there must be trained spotters for cheerleaders to practice with until they are confident with the skill.

During practices and competitions, athletes must perform on appropriate surfaces in order to stay safe. Surfaces such as concrete, asphalt, wet, or uneven surfaces are not allowed. Additionally, any apparatus that helps athletes to jump higher is not allowed during practices without proper supervision. These also aren’t allowed in competitions with the exception of the spring floor.

In competitions there are even more rules that athletes must follow. Cheerleaders must wear solid soft-sole shoes during competition. It is against the rules to have any edible food like gum, candy, or cough drops in an athlete’s mouth during competition in order to avoid choking hazards. Cheerleaders also can’t be wearing any jewelry during competition for safety concerns. Also, no cheerleader or teammate can be replaced in the routine. Whoever starts the performance must also finish with the rest of the squad.

The performance has to be 2 minutes and 30 seconds long. The time will begin after the first move, voice, or music beat. The time will end after the last movement, voice, or music beat as well. At the start of the performance all athletes must have at least one foot, hand, or other body part touching the performing surface. During a performance, props are not required but if a team wants to use them, they must get pre-approval before the competition. Props cannot be any sharp or potentially dangerous items that could block an athlete’s vision. The judges will make the final decision during the pre-approval process on if a prop is considered safe.

Are there any rules for the choreography?

In 2013 the USASF made a rule that the choreography and music selection for competitions had to be appropriate for “family viewing and listening.” This means that inappropriate gestures, hand signals, or other types of inappropriate movements are not allowed. The music must include no inappropriate words and even if the words are replaced with a sound effect, this still may not be enough. The use of any of these could result in disqualification.

How do the different levels work in All Star?

All Star is a little different from the school teams since it focuses on competitions rather than pumping up crowds or cheering on another sport’s team. All Star teams are based out of a club in different areas. Cheerleaders try out for each level ranging from young novices at level 1 to adults at level 7. The higher levels perform higher difficulty skills. Athletes are not moved up just because they get older but rather because they get better.

What are some general rules for different cheerleading skills?

There are additional rules for how to properly do tumbles, stunts, pyramids, dismounts, and tosses. For tumbling, it must always start and end on the surface that the squad is performing on. In pyramids, the top cheerleader must have primary support from a base. To follow the rules for tosses, there have to be between 3-4 bases. These are just a few rules, but there are other more intricate rules for skills.

How are cheerleaders supposed to dress?

For competitions, cheerleaders must dress age appropriately. The uniforms have to be considered not too revealing and have at least one strap. If an athlete wears makeup, it cannot include any rhinestones or type of jewelry. Hair has to be securely kept out of the face in a way that all team members can do. Lastly, bows in the hair cannot be too large or a distraction during the performance. They should also be secure so that they don’t impact the performer’s vision.

Pages Related to What are the rules of cheerleading?