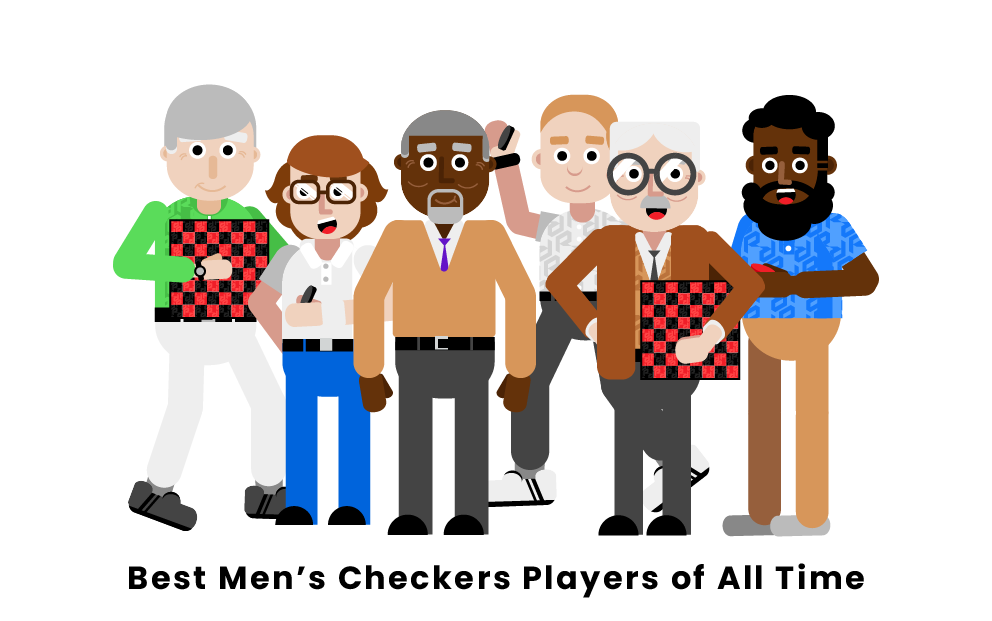 Though many may discount checkers as a child’s game compared to its big brother, chess, it is actually a game requiring knowledge of mathematics, traps, and elaborate strategy. This list takes a look at the six best men’s checkers players of all time, those who were able to master the deceptively challenging game.

Who are the best men’s checkers players of all time?

Born in 1927 in Ironton, Ohio, Marion Tinsley was a gifted child who skipped four of his first eight grades in school and was off to college at age 15. While studying a geometry problem, he found several books about checkers and studied them, so he would be able to beat Ms. Kershaw, an elderly woman who cackled every time she beat him. Though he may have started with a small goal, Tinsley quickly became the best, winning his first World Championship in 1950 and remaining undefeated in matches and tournament play until his death in 1995. His greatest rivalry was with Chinook, a computer algorithm that played checkers. Tinsley defeated Chinook 4-2 with 33 draws in the first World Championship and had to resign after six draws during their rematch, as he was dying of pancreatic cancer. Tinsley is regarded as the greatest checkers player to have ever lived, not even letting a computer algorithm beat him.

Born in 1975 in Pyatilipy, Novgorod Oblast USSR, Alexander Georgiev dominated the World Draughts Championship in the 2000s. He is tied with Alexei Chizhov for the most International Draught Championships, having won a record ten titles, his first in 2003 and his most recent in 2019. He and Chizhov have clashed multiple times in the finals, for instance, in 2003 and 2006, where Georgiev was victorious. He is a Grandmaster of checkers, his highest ever ELO rating being 2472 in 2003, and was ranked as the strongest player on the A list in 2011 with an average ELO rating of 2437.

Born in 1964 in Izhevsk, Russia, Alexei Chizhov is one of the strongest chess players to ever compete in the game. From 1988, where he won his first International Draughts World Championship title at the age of just 24, and 2005 where he won his most recent Draughts World Championship, Alexei Chizhov has taken home the title a record-breaking ten times. The previous record, which stood for 87 years, was held by Isidore Weiss, who had won the title seven times in his career. In 2003, Chizhov headed the World Draughts Federation, and today provides an in-depth analysis of games that can be watched on YouTube.

Born in 1867, little is known about Isidore Weiss, the Frenchman who dominated the game of checkers in the early part of the 20th century. Weiss won his first championship title in 1899 at the age of 32, making him the first recognized world champion. He quickly acquired six other championship titles, winning in 1900, 1902, 1904, 1907, 1909, and his final championship in 1911. His record would stand for 87 years until Alexei Chizhov would win his 8th championship on his way to the current record of 10. Weiss favored playing a high-risk combination game, sacrificing his pieces to create weaknesses in the opponents’ defense that he could later cut through with a single piece.

Born in 1915 in Warsaw, Poland, Maurice Raichenbach was a checkers prodigy. He started playing at the age of only 10, and by 14 was champion of Seine Draughts Club. Just four years later at age 18, he became the youngest Draughts World Champion in 1933. His victory wasn’t beginners luck, however, as he held the title consecutively five more times until 1938, after which World War II broke out, effectively ending his checkers career. He was the last Frenchman to dominate the game, as after WWII, the Soviet Union and Russian players became the dominant force in the World Draughts tournament.

Born in 1967 in Moscow, Russia, Alexander Schwarzman is one of the best checkers players competing right now, having taken home the World Champion title from the International Draughts tournament in 2021. His first title in this tournament was won in 1998. This is his fifth Draughts International World Championship title, but this is not the only area in which he excels. Schwarzman is also a grandmaster in Russian Draughts, where he was national champion five times, and Brazilian Draughts, where he was world champion seven times. He is the only checkers player to have accomplished this feat in three different areas.

Who is the best men’s checkers player of all time?

The best men’s checkers player of all time is Marion Tinsley. Tinsley was so strong that he couldn’t be defeated by man or machine, only losing seven games in his entire career but never dropping a match. When the Chinook computer algorithm was created, he defeated it four games to two, with 33 draws, and tied the program six times in their second competition before having to forfeit for health issues as he was dying of cancer.

What men’s checkers player has won the most Draughts World Championships?

Alexander Chizhov and Alexander Georgiev are tied for the most Draughts World Championships, both having 10 titles. Alexander Chizhov was the first to reach the record number of ten in 2005, but had broken the previous record of seven Draughts World Championships, which was held by Isidore Weiss when he won his eighth title in 1996. Georgiev tied Chizhov when he won his tenth title in 2019.

What men’s checkers player had the longest run as world champion?

Marion Tinsley had the longest run as the world champion of checkers. Tinsley was world champion from 1955-1958 and from 1975-1991, and he never lost a championship match, even to Chinook, a computer algorithm that played checkers. Tinsley could have had an even longer run but would often not compete out of boredom due to lack of competition. However, whenever he decided that he wanted the title, it was his for the taking.