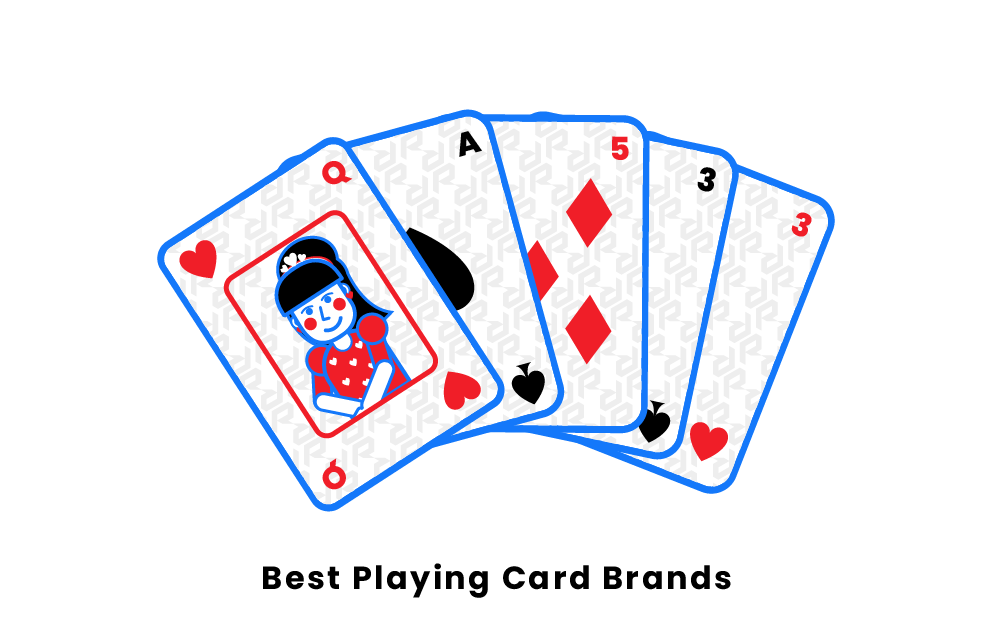 Playing cards are among the oldest and most recognizable forms of human gameplay, with origins that can be traced back to the 10th century and hundreds of different games and challenges associated with their use. In the modern world, playing cards are used for a variety of purposes, from gambling games like poker and blackjack to family games such as “Go Fish” and War, and a number of notable brand names have published playing card sets over the years. Below are the top six best playing card brands.

What are the most popular playing card brands?

Bicycle Playing Cards have long been among the most well-known playing cards in the world. The company that produces them was founded in 1867 by A.O. Russell, Robert J. Morgan, James M. Armstrong, and John F. Robinson Jr., who named it “Russell, Morgan & Co.” The company, founded in Cincinnati, Ohio, got its start printing various advertisements, such as posters for theaters and circuses, and began producing playing cards in 1881 at A.O. Russell’s suggestion to combat the monopolizing of the playing card industry on the Eastern Coast of America. In 1891, the company was renamed The United States Printing Company, and in 1894, only three years later, its playing card business had increased so dramatically that it was made into an entirely separate corporation, The United States Playing Card Company.

In the century that followed, Bicycle Playing Cards continued to explode in popularity and even played roles in historical events such as World War II. During the war, Bicycle partnered with the U.S. Government to send specially fabricated decks of cards to American prisoners of war in Germany, which contained secret maps of escape routes hidden within them. Today, Bicycle Playing Cards continue to sell well and are known for including their signature trademarks on the Ace of Spades card. Bicycle produces many different types of playing cards, including themed cards, tarot cards, and other card games.

A younger company than Bicycle Playing Cards, KEM Cards began producing playing cards in the early 1930s. However, they had a historical advantage in one respect due to their manufacturing method, which made the KEM Playing Card the first mass-produced plastic playing card in history. This meant they were able to be washed and bent without losing their shape or color, like paper cards. This innovation made KEM cards a go-to for rowdy poker players, and their durability quickly made them popular. Their popularity increased during the Second World War when soldiers found that the cards were capable of enduring harsh environments such as humid jungles or desert sands.

KEM cards also became the standard design among poker players, with the company’s distinctive blue and red arrows becoming one of the most recognizable in the business. After 70 years of dominance in the playing card industry, KEM Cards sold its copyrights to the U.S. Playing Card Company in 2004, which began to produce KEM-inspired cards two years later. Though the copyright was sold, KEM cards continue to be popular, and since 2007, they have been the official playing card brand used by the World Series of Poker.

Hoyle Playing Cards, another popular brand, was first produced in 1927 by the Brown & Bigelow Company, which was founded as a printing company in 1896. The cards are named after Edmond Hoyle (1672-1769), who is known for setting down the rules of various card games and is referred to as the “Father of Whist.” The introduction of the Hoyle brand name caused Brown & Bigelow to become so popular that, in 1975, they officially changed their company name to Hoyle. Hoyle Playing Cards are known for the distinctive differences in their art style and for their complex back design consisting of an image of the Greek god Poseidon on a clamshell holding a trident. In 2001, like KEM, Hoyle was sold to the U.S. Playing Card Company, which has continued to produce Hoyle Playing Cards in the years that followed. The brand has also grown to include other forms of media, such as computer games, video games, books, and more.

Bee Playing Cards are another of the oldest brands of playing cards in America. First produced by the New York Consolidated Card Company in 1892, Bee cards were known for their distinctive diamond-patterned backing, which came in both blue and red. Two years after the original company began producing Bee cards, the brand was purchased by the U.S. Playing Card Company, which also produced Bicycle Cards. After the purchase, the Bee Playing Card brand name has continued to be sold by the U.S. Playing Card Company. Bee cards are known for having “borderless backs,” meaning that the pattern on the back of their cards extends all the way to the edges of the card, rather than being surrounded by a border design. This means that the facing on any partially revealed card is clearly visible. The subtlety of the diamond pattern on the backing also makes Bee cards more useful for certain forms of sleight-of-hand.

Slightly less-known than other brands of playing cards, Tally-Ho nonetheless has an equally long history. Known for their distinctive Fan-Back Pattern, which consists of feather-like spokes surrounded by geometric patterns, Tally-Ho playing cards were created by Andrew Dougherty, an Irishman who began to produce playing cards in Brooklyn, New York, in the 1840s. Though his designs were considered crude and sloppy, Dougherty’s business managed to be successful, even producing a special deck of cards to commemorate the U.S. Civil War.

In the 1870s, Dougherty helped pioneer two innovations common in modern-day cards, creating cards with rounded corners and being one of the first card-makers to craft double-sided cards, eliminating the need to hold a card in any one direction. He was also one of the first to add numbers to the corners of his cards so that game-players could easily see their full hands when holding their cards in a fan. Dougherty first introduced the Tally-Ho brand in 1885, and it became known for its signature Joker, which depicted a man in fox-hunting garb, the origin of the brand’s distinct name. Tally-Ho cards continue to be produced today, but the U.S. Playing Card Company purchased the brand and is still responsible for manufacturing them.

Another distinctive brand of playing cards, Aviator was first created in 1927, and its cards were introduced to commemorate the historic flight of Charles Lindbergh. Lindbergh, an American aviator, became famous around the world for performing the first-ever flight across the Atlantic Ocean, which he accomplished in his small, one-seater plane, the Spirit of St. Louis. Aviator cards were first made to acknowledge the historic flight, and though the brand persisted for a time afterward, it too was eventually purchased by the U.S. Playing Card Company. Today, the U.S. Playing Card Company continues to put out Aviator cards in new, stylized packaging, with a large, retro-styled font on the box alongside the silhouette of a jet aircraft. The cards themselves are known for their bordered backing, with a pattern composed of mostly small circles, as well as their smooth finish.

Copag is a Brazilian playing card brand that was founded in 1908. They started out as a stationary production company, but by 1918 had moved into the playing card production industry. Copag cards are used in several casinos worldwide and are the official card provider of the World Series of Poker. While they specialize in producing 100% plastic cards, they also produce paper cards. Through competitive pricing, high-quality manufacturing, and constant innovation, Copag has become one of the top playing card brands in the world.

Modiano playing cards are a quality option at an affordable price. The Italian brand dates back to 1884 and has a long history of producing playing cards. Modiano cards are 100% plastic made with high-quality platinum acetate, making them last 50-100 times longer when compared to other brands that use PVC. Their cards are washable, fade-resistant, and extremely durable. Known for their thickness and texture, Modiano cards provide an excellent playing experience regardless of whether you are playing poker, blackjack, or any other game. They offer a variety of options in different colors, including specialty decks. If you are looking for a reputable brand that won’t break the bank, Modiano playing cards are a great choice.

What are the best playing cards for poker?

While many different brands of playing cards are used for poker, Copag is the official sponsor of the World Series of Poker. Almost all Copag playing cards are made of 100% plastic, designed to easily slide across poker tables. Being properly weighted and being able to glide over the playing surface prevents the cards from accidentally flipping over when the dealer is handing out cards. Bicycle and KEM also make fully plastic high-quality playing cards that are very suitable for all levels of poker.

What kind of cards do most casinos use?

Today, almost all casinos use plastic cards, as these are the most durable and highest quality material of cards. Standard index playing cards are typically used at casinos, but jumbo index cards are used in some cases. As for brands, casinos use varying brands, but KEM cards are the most common choice for casinos.

What is the best material for playing cards?

The best material for playing cards is 100% plastic. Plastic cards are used by most casinos and are the most durable and highest quality cards. Many plastic cards are waterproof and fold-resistant, so they’ll last a long time. Vinyl cards are a tier lower, being slightly cheaper and less durable, but will perform similarly to plastic cards. Paper cards are the cheapest and least durable type of playing cards. Paper cards will fold easily and suffer from water damage, meaning they will have to be replaced frequently. Wood or metal novelty playing cards are much less common and aren't recommended if you want a natural playing experience.