What is Capture The Flag? 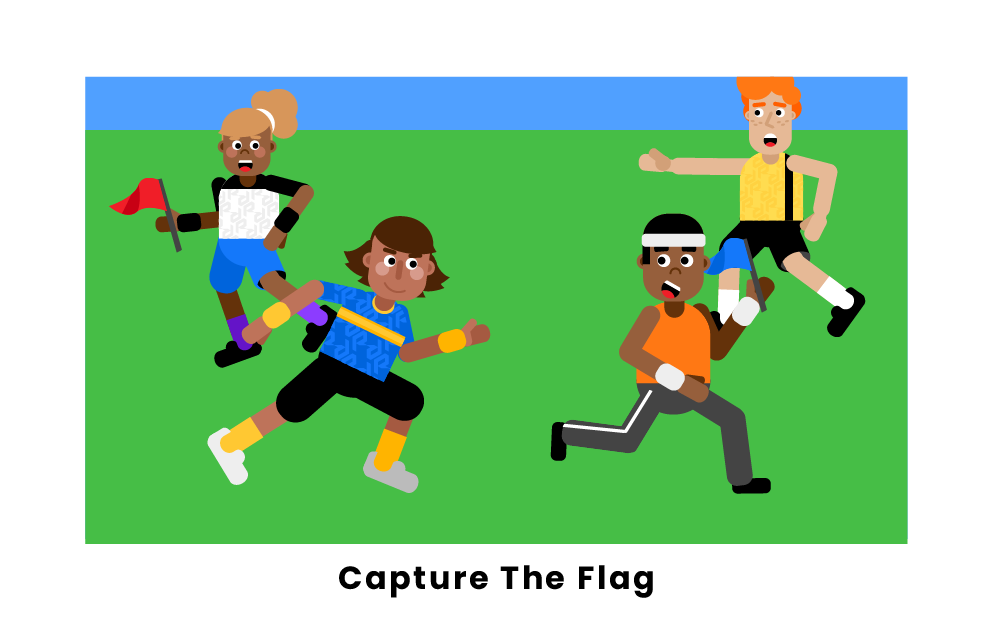 Capture the flag is a sport that pits two teams against each other. The goal of the sport is to run towards the other team’s flag and attempt to bring it back. Once the flag safely gets back to a team’s side, they are deemed the winner of that round. Keep reading here to learn more about how to play Capture the Flag!

Capture the flag has roots tracing all the way back to the Civil War battlefield. Back then, battles were decided when one side captured the other side's flag. This was important because it didn’t matter how many casualties there were for each side. The only thing that mattered was to bring back the opposition's flag. Since these times, bringing back a flag has much lower stakes as capture the flag has become one of the most popular games that children play. 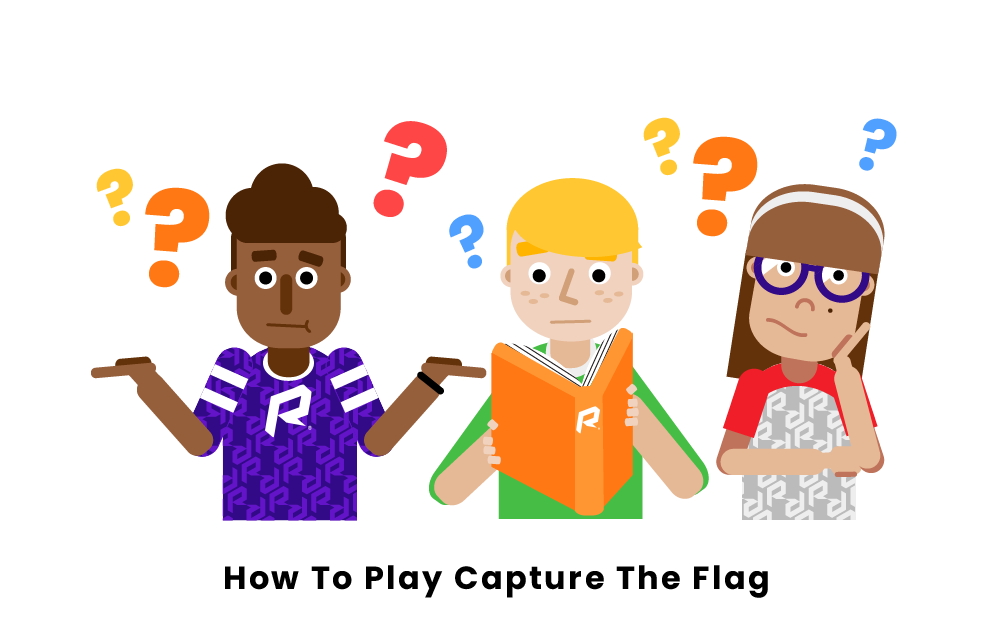 Capture the flag is a simple game, making it easy to understand at all ages. The players are split into two different teams and are both assigned a side of the playing surface. This surface can be indoors or outdoors, but outdoors is preferable since there is more space to run around and less risk of running into anything. On this playing surface, there is usually a middle line and a jail situated in the back corner on both sides. The middle line is there so players know if they are in danger of being tagged and sent to jail. Once sent to jail, players have to wait there until one of their teammates touches them and frees them. Because of how easy it is to set up the playing area, capture the flag can be played almost anywhere. 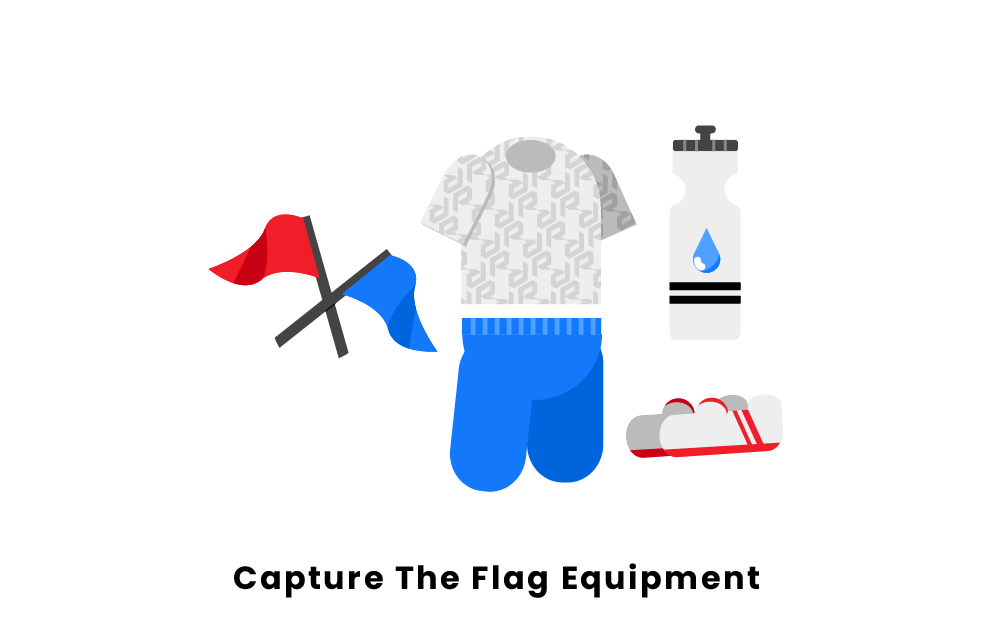 Capture The Flag is a simple game which means that it does not require much equipment. This makes it easy to set up and play at any time.

Here is the essential Capture The Flag equipment you should have:

Flag: The flag in this game can be almost anything. This could be anything ranging from an old T-shirt to bandana to an actual flag that is planted in the ground. Preferably, this flag would be easy to carry.

Pinnies: This piece of equipment is optional, but they could be used to differentiate between the teams. It might be necessary for younger kids so they are able to play easier.

The main objective in a game of capture the flag is to bring the flag back to your team’s side without being caught. This is done by running and avoiding being tagged. When tagged, you head to jail. This creates a second objective for the offensive players as they try to tag their teammates out from jail. If a player is staying on his own side, his objectives include guarding his team's flag and tagging opponents who are trying to steal their flag.

The rules of capture the flag are easy to understand for all ages. This makes the sport easily accessible to all ages and athletic abilities.

Here are the most important Capture The Flag rules you should know:

Players are only allowed to be tagged if they are on the opposing team’s side. If they are on their own side, they are playing defense and are trying to tag players on the other team.

Defensive players are not allowed within 10 feet of their own flag. This makes it so that players are able to get to the flag and have a second to regather themselves before they make the sprint back to their own side of the field.

The flag must be carried back over the midfield line for a team to win. A player is not allowed to throw the flag to a teammate that is safely on their side if they feel as though they are about to get tagged.

Here are the most important Capture The Flag strategies you should know:

Keep at least half of your team on defense. If the game starts and everyone on one team goes and tries to get the flag, it will lead to a free run for the other team. To avoid that, some players have to take the less glamorous position of guarding the flag.

Try to bring people back from jail as soon as possible. When people go to jail, it might seem like a good idea to keep them there and continue trying to get the flag. This is not the best thing to do because the less players a team has, the harder it is to guard their own flag. 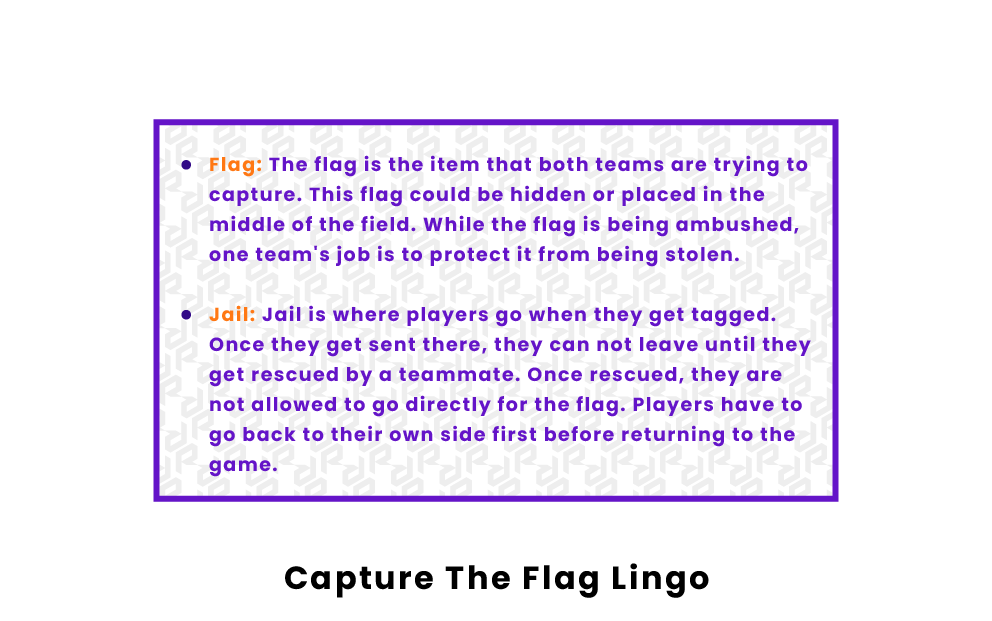 In order to play a successful game of capture the flag, there are a few words that players should be familiar with. Here they are along with their definitions!

Here is the common lingo and slang in Capture The Flag:

Flag: The flag is the item that both teams are trying to capture. This flag could be hidden or placed in the middle of the field. While the flag is being ambushed, one team's job is to protect it from being stolen.

Jail: Jail is where players go when they get tagged. Once they get sent there, they can not leave until they get rescued by a teammate. Once rescued, they are not allowed to go directly for the flag. Players have to go back to their own side first before returning to the game.

Can Capture the Flag be played indoors?

Capture the flag can be played as an indoor game. While there is likely less space indoors than if you were playing outside, it is still achievable. It is not the ideal scenario and there is a risk of breaking things, but if parents are alright with it, the game can be played inside.

How many players are on each team in a game of capture the flag?

How is a player sent to jail?

A player is sent to jail if they are tagged on the opposing team’s side. A player can only be tagged if a defensive player touches them with two hands. If a player is tagged with one hand, they are still safe and in the game.

Pages Related to What is Capture The Flag?