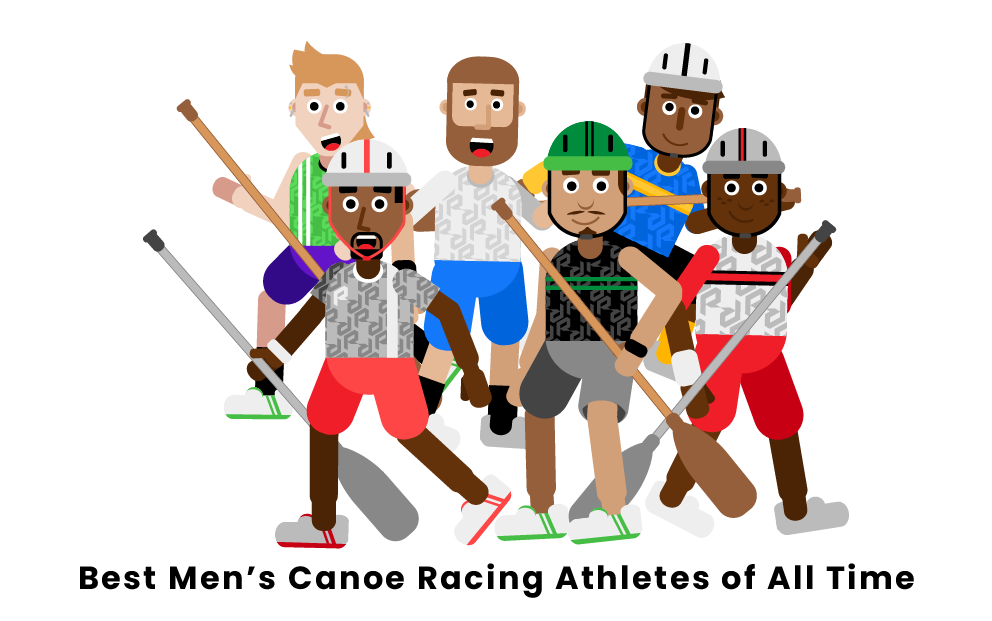 Between the Olympic games and the ICF Canoe Sprint World Championships, there is no shortage of places for the Top Men's Canoe Racing athletes to showcase their skills and abilities. This article will familiarize you with some of the best canoeists of all time and explain what contributed to their greatness.

Who are the best men’s canoe racing athletes of all time?

Swedish kayaker Gert Fredriksson is not only one of Sweden's most remarkable athletes but one of the greatest athletes the canoe world has ever seen. Over his twelve-year career, Fredriksson had been dominant while representing Sweden at the Olympic Games, where he won numerous medals. His first gold finishes were in the Kayak Singles, 1,000 meters, and Kayaks Singles, 10,000 meters events held during the 1948 London Games. Fredriksson went on to participate in the Helsinki (1952), Melbourne (1956), and Rome (1960) Olympic Games, where he won another four gold medals, one silver medal, and one bronze medal.

Rüdiger Helm was an East German sprint canoeist who competed professionally from the mid-1970s to the mid-1980 and found massive success during this time. Helm was widely recognized as a skilled canoe racer, and his 19 medals won at the ICF Canoe Sprint World Championships, 10 of which were gold, help cement this fact. Helm also had the privilege of representing Germany at Two Olympic Games, winning two Bronze medals, a gold in the Kayak Singles (1,000 meters) Canoe Sprint event at the Montreal 1976 games, and later winning two more Gold Medals and another Bronze in the Moscow 1980 games.

Tony Estanguet is one of the best canoe racing athletes to represent France internationally in professional competitions. Estanguet is one of the best European racers, showcased by his four European Canoe Slalom Championships World Cup titles; three World Cups in the Men's slalom C-1 event (2000, 2006, and 2011), and one Men's slalom C-1 team in 2011. Estanguet also won an equally impressive five ICF Canoe Slalom World Championships (2005, 2006, 2007, 2009, and 2010) as well as winning three Gold medals in the Canadian Singles, Slalom Canoe event at the Sydney (2000), Athens (2004), and London (2012) Olympic games.

Romanian sprint canoer Ivan Patzaichin competed from the late 1960s to the mid-1980s and was an absolute force. Ivan was dominant during his time as a professional, winning a stunning 22 ICF Canoe Sprint World Championship medals, nine of which were golds. Ivan represented Romania at the Summer Games on four separate occasions, his 1st being in the 1968 Mexico City Games, where he won gold in the Canadian Doubles (1,000 meters) event. Ivan went on to also compete in the Munich (1972), Montreal (1976), Moscow (1980), and Los Angeles (1984) Olympic games, where he won three more Gold medals and another three silver medals as well.

Who is the best men’s canoe racing athlete of all time?

Gert Fredriksson is the best men's canoe racing athlete of all time. The Swedish canoe racer has an absurd resume that includes; eight Olympic medals, six of them being Golds, 56 separate individual championships, three first-place finishes in pair events, and eight world championship titles. Over his 12-year-long career from 1948-1960, he participated in four separate Olympic Games (London, Helsinki, Melbourne, and Rome) and even coached the Swedish men's kayaking team at the 1968 Mexico City Olympics.

What men’s canoe racing athlete has won the Olympic gold medals of all time?

The men’s canoe racing athlete who has won the Olympic gold medals of all time is Gert Fredriksson, the Swedish Canoe Racer and possibly one of the greatest canoe racers ever. Gert Fredriksson managed to win an astounding six separate gold medals during his time representing Sweden throughout four different Olympic Games: two at the 1948 London games, one at the 1952 Helsinki games, another two at the 1956 Melbourne games, and his final one at the 1960 Rome games.

What men’s canoe racing athlete has won the most ICF Canoe Sprint World Championships all time?

The owner of the most ICF Canoe Sprint World Championships all-time is East German Canoeist Rüdiger Helm. Helm was a two-time Olympian for Germany, and a three-time gold medalist, an unsurprising fact, as his skills on the water were widely respected. Throughout his career, from the mid-1970s to the mid-1980s, Helm won 19 total medals at the ICF Canoe Sprint World Championships, ten of which were gold, which is the most of any canoeist.