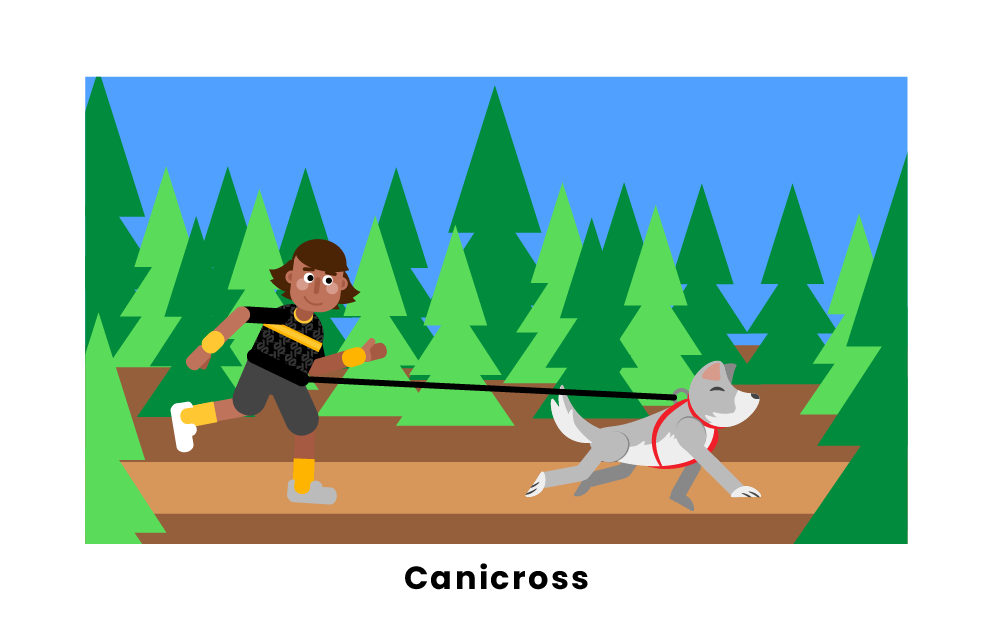 Canicross is essentially cross country running, except with your dog! Canicross races consist of runners running with their dogs tied to them through a harness. The sport was originally designed as an off-season training exercise for sled dogs, meant to keep them in shape during times of the year where there isn’t any snow on the ground. As this evolved into recreation and eventually competition, in the early 2000’s, the sport rose in popularity. The dog is attached to the runner through a harness worn by the dog, a bungee rope, and a specifically designed belt worn by the runner. The canicross season runs from September to May, and races range from about three miles to over 13 miles. The International Canicross Federation (ICF) hosted the inaugural Canicross World Championship in 2018. There are different types of canicross races, depending on the dog used.

Canicross is a cross country race with a dog attached to each runner with a harness, bungee rope, and belt. The races differ depending on the breed of dog, typically ranging between 3 and 13 miles. The first world championship took place in Poland in 2018. The Canicross World Championship has traditional canicross races, along with canicross relay races and circuits where there are races over multiple days.

What dog breeds can do canicross?

There are many different dog breeds that can compete in a canicross race with their human. The best dog breeds for canicross are German Shorthaired Pointers, Weimaraners, Labradors, Border Collies, Vizslas, and German Shepherds. Training for canicross before racing is very important for any dog because they have to get used to running with their trainer and running with a harness on. Canicross dogs must also become accustomed to their trainer's running pace in order to move at a speed that enables maximum efficiency but avoids putting their human at risk of falling as they pull.

What are the benefits of canicross?

Canicross will develop your dog's focus, patience, and team skills. They learn not to get distracted by toys or animals when running. Canicross is also a great way to keep your dog in shape and helps them build confidence from exercising consistently. Canicross promotes healthy rest and wards off diseases for dogs as well. The sport creates a very special bond between dogs and humans as they learn to run and race together.