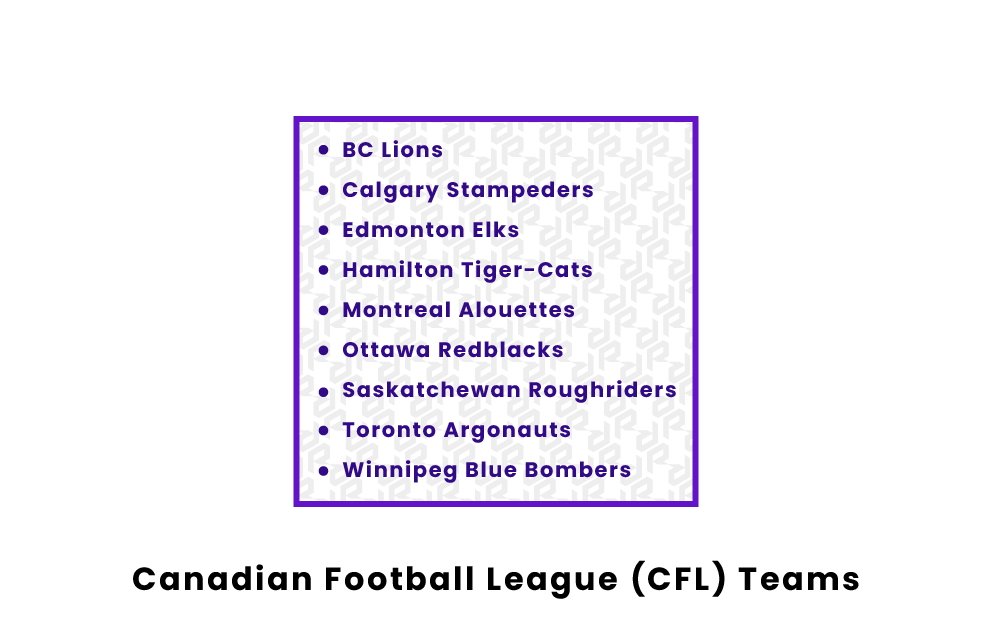 The BC Lions, established in 1953, are a professional football team based in British Columbia and are the oldest sports franchise located in Vancouver. Since its inception, the football team has made it to the Canadian Football League Championship 10 times and have won the Grey Cup six times. Their most recent championship win was in 2011. The BC Lions play in the West Division and hold the title of the second-longest playoff streak in Canadian Football League history. Fans anticipate another Grey Cup win in the upcoming season, especially since the BC Lions haven’t won a championship title in over a decade.

The Calgary Stampeders, a team part of the West Division, are a professional football team based in Alberta and a major competitor in the Canadian Football League. The football team was originally a professional rugby team that was part of the Alberta Rugby Union. In 1945, the team was rebranded as the Calgary Stampeders and was given the nickname “the Stamps.” Overall, the Stampeders have eight Grey Cup wins and have competed in the championship game 15 times. The “Red and White” football team hasn’t won a Grey Cup since 2018, so the team hopes to score another championship title soon.

The Edmonton Elks are a popular professional football franchise that has been a part of the CFL since 1949. The football team, which is known for its green-and-gold color scheme, is owned by the surrounding community of Edmonton, Alberta. The Elks have won the Grey Cup 14 times, which includes winning the championship five times in a row from 1978 and 1982. The team prides itself on its long history of phenomenal football players. The Edmonton Elks continue to honor their most valuable players on the Wall of Honour, which is located at Commonwealth Stadium. Over 40 players have been honored for their record-breaking careers while playing for the Elks football team.

The Hamilton Tiger-Cats, founded in 1950, are an East Division professional football team based in Hamilton, Ontario. Similar to the Stampeders, the team was originally designated as a rugby football team, which competed in the Ontario Rugby Football Union (ORFU). By 1950, a merger between the Hamilton Wildcats and Hamilton Tigers resulted in renaming the team “the Tiger-Cats” when the team joined the Canadian Football League. The football team has won eight championship titles, and the most recent occurred in 1999. Despite experiencing a drought in Grey Cup wins, the Hamilton Tiger-Cats look forward to writing another championship title in the books in the upcoming seasons.

The Montreal Alouettes are part of the East Division of the Canadian Football League. Montreal is steeped with football history that stems back to the nineteenth century. The first recorded game of football even occurred in 1868 in Montreal. The Montreal Alouettes were formed in 1946, and rumor has it that the name derives from a popular French song that was once sung in a hotel lobby in Montreal, Quebec. The Canadian football team has won seven Grey Cups, and the last championship was won in 2010 against the Saskatchewan Roughriders. In 2019, the Montreal Alouettes changed their logo to an “M” to cultivate a community-based identity in its redesign.

The Ottawa Redblacks are another professional sports franchise that are part of the CFL. Located in Ottawa, Ontario, the Redblacks stem from a long history of football similar to the Alouettes. The first football club was founded in Ottawa in 1876, which was only nine years after the confederation of Canada. Originally known as the Rough Riders, the Canadian football team rebranded itself into the Renegades in 2002 and then finally became the Redblacks in 2014. The Redblacks won a Grey Cup championship in 2016 but have yet to win another title. After undergoing much rebranding, the Ottawa Redblacks look forward to competing for another Grey Cup in the upcoming football season.

The Saskatchewan Roughriders is a Canadian football team in the CFL located in Regina, Saskatchewan. The Roughriders were originally formed in 1910 and named the Regina Rugby Club. After a series of name changes, the football team finally landed on the name “Roughriders” after being renamed the Senators in 1924. The Roughriders competed in their first Grey Cup game in 1923 and have won three championship titles in total. Since 2013, the Roughriders have been considered the most popular team, with a large fanbase, in the Canadian Football League. Although the team hasn’t had a Grey Cup win in a while, the Roughriders have won four championship titles in league history.

The Toronto Argonauts, who are also known as the Argos, are a professional football team that is part of the East Division in the CFL. Unlike other CFL football teams, the Argonauts have kept their namesake since 1873 and are the oldest team in the East Division and Canadian Football League overall. The football team has an impressive history of competing for the championship. The Toronto Argonauts have won 17 Grey Cups and have appeared 23 times in the finals. The most recent win was against the Calgary Stampeders in 2017. Although they have many rivals, the Argonauts’ biggest rivalry is against the Hamilton Tiger-Cats.

The Winnipeg Blue Bombers were founded in 1930 and are a competitive Canadian football team that plays in the CFL. The Blue Bombers received their nickname from the blue-and-gold uniform that players wear during games. The football team won their first Grey Cup in 1935 and experienced what is called “the Golden Age of Bomber football” between 1952 and 1962. Overall, the Blue Bombers have appeared 26 times in the finals and have taken home the Grey Cup 12 times. The most recent victory was in 2021 against the Hamilton Tiger-Cats, despite missing the 2020 season due to the COVID-19 pandemic.