What are the rules of bull riding? 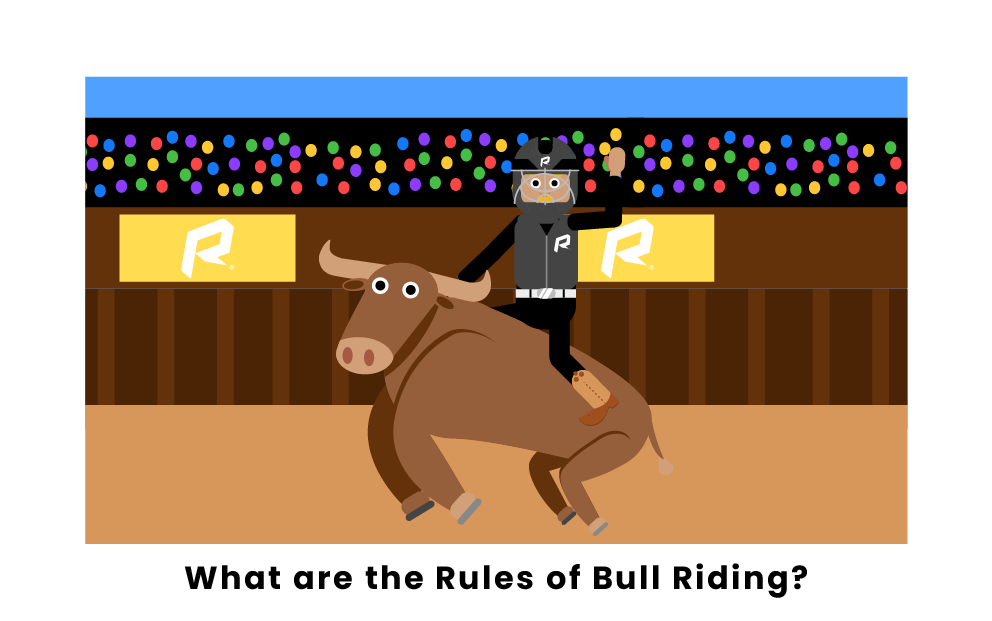 Bull riding events are mostly done as multiple day rodeo competitions. Bull riders will ride a randomly chosen bull each night throughout the competition. This is done to truly test the rider and make sure they are a good rider on different bulls. Although each bull is chosen because they have shown strength, agility, and good health, each ride will still be a very different experience.

Each bull ride begins in a "bucking chute." The chute is like a small stall where the bull is enclosed on all sides except the top so the rider can get on. This space is small enough that the bull can't move too much. This allows the rider to get a good grip before the ride. The riders will then signal when they are ready and the chute will open into the arena.

The time officially begins once the bull's shoulders cross the gate's plane. From this point on the rider has to try and stay on using only one hand. The time will stop once a rider's hand comes out of the rope, the rider falls and hits the ground, or if the rider's other hand touches either himself or the bull. If the other hand touches the bull it is known as a slap. While the rider is on the bull there are always "rodeo clowns" in the arena ready to distract the bull and help the rider in order to keep the sport as safe as possible.

Throughout rodeo competitions the highest scoring riders move on to the next day. The rider with the highest cumulative score at the end is announced the competition's winner.

There are some cases in which a rider will get a second chance to ride. A re-ride is given some times because the bull doesn't perform well. This means the bull negatively affected the rider's score by not bucking, not spinning, or something else to give the bull a very low score. A rider can also get a re-ride if a foul occurs. A foul occurs when the rider brushes against the chute while coming out, the bull falls, or any other situation that doesn't give the rider a fair chance at lasting eight seconds. The judges will signal that they give the rider a re-ride by throwing a red flag into the arena.

The scoring system for bull riding is based around staying on the bull and staying in control. However, there are a couple more intricacies that make it more complicated. First, the scoring only happens if a rider is able to stay on for longer than eight seconds.

If a rider stays on the bull for eight seconds, then four judges rate both the bull's and the rider's performance. The judges will rate each on a scale of 1 to 25. The judges then combine their scores for the bull and for the rider and half it. This gives a rider score from 1-50 and a bull score from 1-50 which together give the overall ride a score from 1-100.

The bull is actually given a score even if the rider doesn't stay on for eight seconds. The bull's score is higher the more difficult it is to ride. Although this is tough to translate into actual numbers, the judges look for some certain features. They try to notice any drop in the bull's front, if the bull kicks the back legs, spins, and how often the bull changes directions. All of these factors make for a more difficult ride and therefore make it more impressive if the rider stays on.

The rider on the other hand is scored based on how well they are able to stay in control. They are only scored if they stay on the bull for more than eight seconds. The judges specifically look for the rider to counter the moves of the bull in order to stay in balance. It should look almost as if the bull and rider are in harmony.

What are bull rider's required to wear or have?

Rider's are not allowed to hop on a bull wearing whatever they want. There is some required equipment. Riders must have bull rope in order to hold onto the bull and gloves so that the rope doesn't hurt their hands. Riders also wear boots with spurs that help them stay balanced on the bull. Lastly, riders wear chaps, a padded vest, and a helmet. The chaps help the rider avoid chafing while being thrown around and the helmet protects their head in case they fall.

How long do different competitions last?

If any rider scores 90 or more points, this is considered to be an incredible score and is quite rare. Most professional bull riders can consistently score between 75 and the mid 80s. Receiving a perfect score of 100 is nearly impossible to do. However, it has happened once before. Wade Leslie got a perfect score in 1991 and has yet to have anyone match his feat.

Are there any safety rules in place?

The Professional Bull Riders have a couple rules in place specifically designed to make it safe. First, the equipment mentioned earlier that bull riders wear is all to keep them safe and minimize any serious injuries. Additionally, there's a concussion rule that after a fall, riders must be tested for a concussion before they are allowed to get back on a bull. Lastly, the rodeo clowns, now called bull fighters, are always in the arena for help.

Pages Related To What are the rules of bull riding?