What Are The Best Seats At A Bull Riding Show? 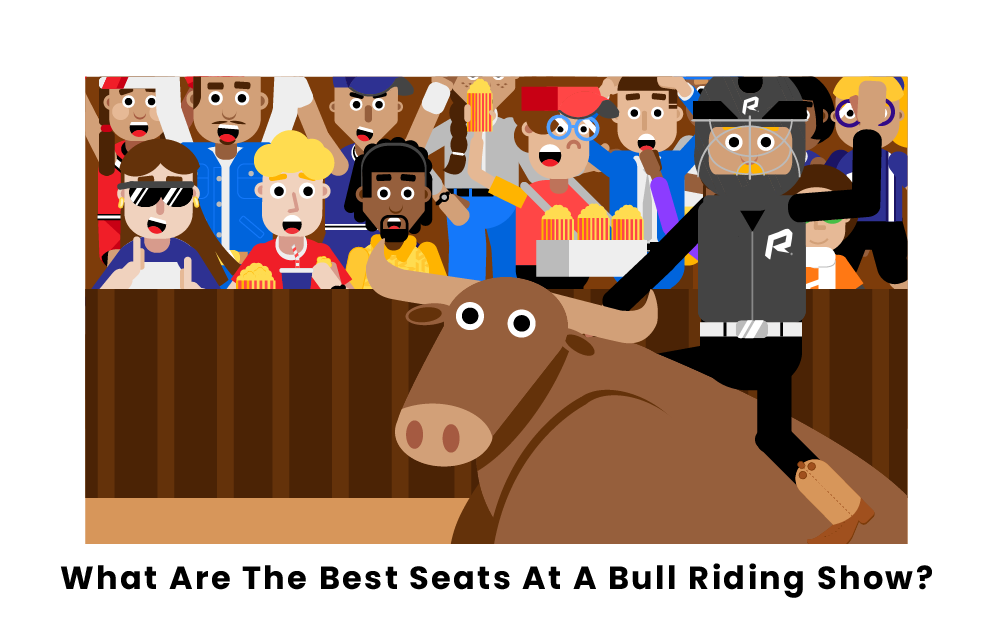 Bull riding is one of the many sports that fall under the wide umbrella of rodeo events, and in places where rodeo is popular, these events often draw large crowds to arenas of varying sizes, which can make one wonder where to find the best seats for a bull riding show. As with any sport, there are a variety of perspectives on what makes a good seat at a bull riding show. Some people like to be as close to the action as possible, while others enjoy having higher seats in order to get a broader scope of the event. Here, we will take a look at the various places to sit at a bull riding show and examine the advantages and disadvantages of each.

An important overall distinction to make before examining the best seats at a bull riding show is between the types of events at a rodeo and where they are held in the arena. Most bull riding shows are just a small part of a larger rodeo, so fans who attend a bull riding event only for that sport will have to be aware of the other events occurring around the bull riding. Generally, rodeo events are divided into two categories: rough stock and timed. Rough stock events are the category bull riding falls under and involve riders attempting to hang onto a wildly-bucking animal. On the other hand, timed events involve various challenges, such as completing obstacle courses on horseback or wrestling an animal to the ground. These events are distinct because they are generally held at opposite ends of the arena, with timed events historically being held at the stadium's southern end and rough stock events being held at the northern end. Therefore, fans of bull riding should be aware that their event is most likely going to be held at the northern end of the stadium and plan to sit in the appropriate sections.

There is some debate over whether front-row seats are the best seats for bull riding events, and many different experts propose various answers to the question. To some, front-row seats are naturally the best seats at bull riding events (or any rodeo events, for that matter). Proponents of front-row seats state that these seats are best because they bring spectators closest to the action, giving them up-close views of the wild bull riding events and making them feel like they are directly involved in the event itself. However, other rodeo enthusiasts argue that front-row seats come with certain disadvantages. Firstly, seats in the front and first few rows have a limited arena-wide view and are essentially forced to pay attention mostly to what is close to them. Secondly, in many cases, front-row seats can have obscured views of the action if, for example, event sponsors have hung flags over the protective railings, which would sit in front of spectators’ eyes. Thirdly, a less pressing concern for front row spectators is the slight possibility that an agitated animal may charge at or attempt to leap over the fencing of the arena, which would place front row spectators in a vulnerable position. Finally, front-row seats are more likely to be higher-priced than other seats in the arena due to their prized nature. At many bull riding events, such as Professional Bull Riders (PBR), tickets at the lower level of a stadium can cost $65 to $75 for smaller events, or even as much as $100 to $200 for high-profile or championship events.

As with front row seats, some bull riding spectators prefer to sit higher up in the stadium or arena where rodeo events are taking place. There are unique advantages to higher seats that these fans prefer over lower, closer seats. Firstly, higher seats afford viewers a broader view of the action than front row seats, allowing spectators to take in the entirety of a bull riding event without having to move about or shift positions. Secondly, another advantage of higher seats is that they are less likely to be obscured by fencing or decorative banners. Like most arenas, stadium seating at bull riding events is tiered, meaning that rows of seats rise upwards so that spectators can easily see over each others’ heads. A final advantage of higher seats is that they are often less expensive than closer seats, often costing anywhere from $50 to $70. However, higher seats do come with inherent disadvantages. Most obviously, higher seats take viewers further away from the action and may be less exciting than front row seats, which bring spectators right into contact with the bull riders. Higher seats can also make certain elements of bull riding harder to see, which may be undesirable for certain types of fans.

Seats Near the Chutes

A final important consideration for fans of bull riding is the placement of one’s seats in relation to the chutes. In rodeo, “chutes” is the term used to describe the small, fenced-in areas where wild bulls and horses are penned prior to being released and where their riders are asked to mount the bucking animals for their events. For most bull riding fans, having a seat that faces the chutes is considered the best option, as this affords spectators a clear view of where the bull emerges into the arena. However, some bull riding enthusiasts may prefer to sit close to or above the chutes because these seats are not only the closest to where the bull riding occurs, but sitting close to the chutes often allows the extra excitement of seeing the bull riders mount up prior to their rides.

There are several seating options available for fans of bull riding who want to attend shows or larger rodeo events. Depending upon the desired experience, certain fans may prefer different seats. For those who want to be close to the action, front-row seats may be best, but higher seats may be preferable for those who want a wider view. Additionally, bull riding fans will want to consider how close they will be to the side of the arena the bull riding takes place on and what angle they want to have for viewing the chutes that the bulls emerge from.

Pages Related to What Are The Best Seats At A Bull Riding Show?