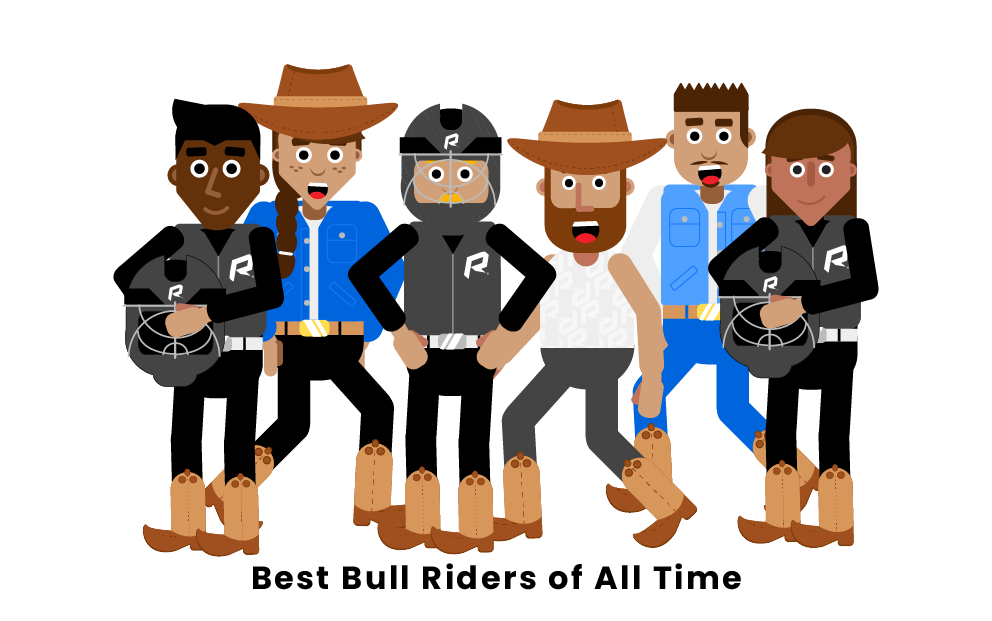 Bull riding is a dangerous and thrilling discipline of rough stock, which are pro rodeo events. Bull riders must stay on a bucking bull for at least 8 seconds to earn a qualified ride. The rest of the performance is judged on the bull's buck as well as the cowboy's form. Read more to learn about some of the best bull riders in the sport's history.

Who are the best bull riders of all time?

Tuff Hedeman is an iconic bull rider with an impressive career. He has toured the country for over 30 years producing shows and has won four PRCA World Championships. In fact, he has held bull riding competitions in the El Paso County Coliseum for 17 consecutive years. His career led to him co-founding and eventually becoming president of the Professional Bull Riders organization. Hedeman started bull riding early in his youth and won several bull riding competitions in New Mexico. Hedeman is known for his dangerous rides on the bull Bodacious, as well as his friendship with another fellow bull rider, Lane Frost.

Lane Frost was known as a man who embodied the career of bull riding and unfortunately died at 26 years old during a tragic bull riding accident at the Cheyenne Frontier Days Rodeo. Frost's family and friends remember him for his kindness and selflessness. Frost won his first award for bull riding when he was 10 years old and had an incredible career after that. He won the PRCA World Championship in 1987 and, after his death, was inducted into the Pro Rodeo Hall of Fame and the Bull Riding Hall of Fame. He was also one of the only bull riders able to successfully ride Red Rock, a bull named Bucking Bull of the Year in 1987. The movie 8 Seconds tells his story, and the Lane Frost Award was created in his honor, which is awarded to the person in the bull riding industry who best emulates Frost's passion for promoting rodeo.

When Larry Mahan was at the peak of his career, he was the best in history thus far. Mahan began competing in rodeos at 14 years old and soon after began riding for the Professional Rodeo Cowboys Association. Mahan's eight world championship wins made it clear he was a talented rider in rough stock sports. His last PRCA World Championship win in 1973 is the subject of the documentary The Great American Cowboy. He was the first bull rider to compete in three events (saddle bronc riding, bareback riding, and bull riding) and also the first bull rider to win more than $50,000 in a single season.

Jim Shoulders, also known as the Babe Ruth of rodeo, is most known for his 16 total world championship titles in all-around riding, bull riding, and bareback riding categories. At 21 years old, he won his first world championship title, then continued to win world championships in three different rodeo categories over an impressive span of ten years. He is also known for his impressive ability to withstand pain. Shoulders would frequently compete while he was injured and continued to earn winnings despite his injuries. He did have a surprising introduction to bull riding. He grew up in the city without any experience with livestock, but was inspired to enter his first rodeo at fourteen years old after he watched one. Outside of bull riding, he is also known for his commercial work with Cowboy Cut Jeans and Miller Lite. Shoulders passed away in 2007 after fighting against heart disease.

J.B. Mauney is the bull rider with the most recent career on this list. He frequently picks the most aggressive bull in the pens and is currently one of the most talented bull riders on the scene. In 2016, Mauney was the first bull rider to earn $7 million in earnings. Not only has he won two PBR World Championships, but he is also one out of three riders to stay on the bull Bushwacker for a complete 8 seconds. In 2019, Mauney tied Justin McBride for the most elite televised wins in Professional Bull Riding's history.

Don Gay is an American bull rider who holds the record for the most PRCA Bull Riding World Championships. He began bull riding at a young age and declared that he wanted to be a world champion at age five. His father, Neal Gay, was also a hall of fame bull rider, and the two are the only father-son duo in the ProRodeo Hall of Fame. Gay began his professional bull riding career after high school and joined a traveling rodeo circuit. During his career, Gay dominated the sport, winning eight PRCA Bull Riding World Championships and qualifying for the National Finals Rodeo 13 times. After his retirement in 1989, he was a commentator for many years before becoming the manager of the Frontier Rodeo Company. Gay now runs his own rodeo tour, called the Don Gay Bull Riding Tour, and remains active in the sport. He was inducted into the ProRodeo Hall of Fame in 1979 and the PBR Ring of Honor in 1997.

Chris Shivers is a former professional bull rider from Natchez, Mississippi. Shivers set a few records during his career, including becoming the first bull rider to win over $300,000 in a single year. He also was the first bull rider to earn $1 million, $2 million, and $3 million in a career. Shivers won two PBR World Championships, gaining those accolades in 2000 and 2003. He also holds the record for most 90-point bull rides with a total of 94. After retiring in 2012, Shivers was nominated to the PBR Ring of Honor in 2013 and the Bull Riding Hall of Fame in 2017.

Who is the greatest bull rider of all time?

Tuff Hedeman is the greatest bull rider of all time. During his impressive career, he won three Professional Rodeo Cowboys Association World Championships and has been inducted into four rodeo Hall of Fames. He was one of the founders of the Professional Bull Riders, an organization that has been instrumental to the sport. In 2018, he organized his own bull riding touring show and travels across the country to manage bull riding competitions.

Who has won the most bull riding championships?

Don Gay currently holds the record for the cowboy with the most Professional Rodeo Cowboys Association Bull Riding World Champion titles. During his career, Don Gay won eight bull riding world titles. Gay won his first world championship in 1974 and his last in 1984. He also has the third-highest marked ride in bull riding history from when he rode the bull Oscar at Cow Palace in 1977. Jim Shoulders ranks second for the most PRCA Bull Riding World Championships, earning seven throughout his career.

What bull rider holds the record for the most total rides?

Guilherme Machi currently holds the Professional Bull Riding record for most rides. Throughout his career, Marchi has completed 635 qualified rides. A qualified ride is when a bull rider stays on the bull for at least eight seconds. Machi dominated bull riding in 2008, during which he won the PRCA World Championships and earned over $1.5 million. Machi retired from bull riding in 2018 with over $5.3 million in total career earnings.

Pages Related to Top 6 Best Bull Riders of All Time