How Does Scoring Work In Bull Riding? 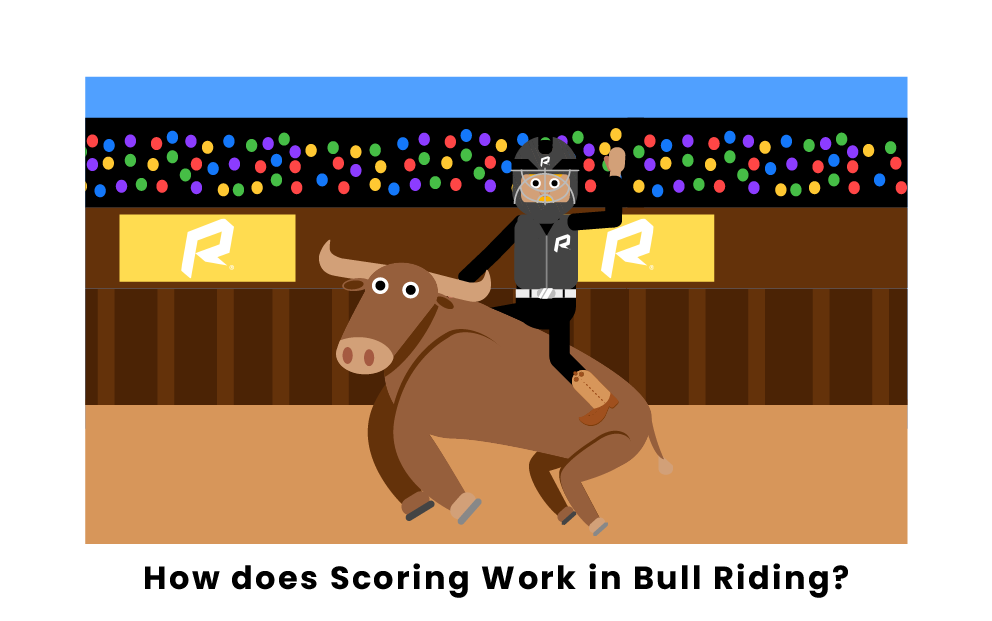 Not everyone who competes in a bull riding competition is guaranteed a score. There are a couple of ways for a cowboy to get their ride disqualified; if that happens, they are not eligible to have that ride scored. Cowboys must ride the bull with only one hand, and if they touch themselves, their rope, or the bull they are riding with their freehand, they are disqualified. Cowboys also get disqualified if they do not stay on the bull for eight seconds, which is the time needed for a ride to be considered a complete ride. If a rider completes their ride without getting disqualified, that ride is given a score ranging from 0-100.

How a Ride is Scored

Most certified competitions for professional and amateur bull riders are scored by a panel of four judges, although some competitions (especially smaller ones) may only have two judges. Every ride has the potential to earn up to 100 points, with 50 points available for both the rider and the bull to earn, respectively. Four judges award up to 25 points each to the rider. These scores are added together and divided by two. The same process is taken to score the bull, and then the rider’s and bull’s scores are added together to get the final score for the ride.

Half of the 100-point score given is based on how skillful and adept the rider is, and there are a few guiding criteria that judges tend to follow when deciding the right score for a competitor. When considering a score for a cowboy, judges are looking for their ability to keep consistent control over the situation as well as their body position throughout the duration of the ride. Judges like to see the rider in rhythm and harmony with the bull’s movements as the cowboy sways, shifts weight, and changes their position to stay atop the bull. Generally, the better rhythm a bull rider can get into, the higher the score they will receive.

What is a good score in Bull Riding?

A good score in bull riding is considered to be at or over 75 points. This means that both the rider and bull performed well. Experienced professionals are often able to record scores over 80. Riders that score 90 points or more have put together an excellent performance, as this is extremely difficult to do.

Why would a rider be granted a re-ride?

Judges are allowed to grant individual riders re-rides if they believe the bull did not perform well enough during the cowboy’s ride, hindering their score. In these cases, a re-ride is granted. For a rider to be granted a re-ride in bull riding, they must at least have completed a full eight-second ride. Riders are not granted re-rides if they are disqualified during competition or if they are thrown off of the bull before their eight seconds are up.

Why do bulls buck?

Bulls, while bred to be domesticated for pulling, are still wild beasts not necessarily willing or used to having a human mount their back. As prey animals, bulls have a natural disposition to defend themselves, so when they are threatened from their backs, they have the instinct to buck wildly in defense.

There is some specific equipment that encourages the bull to buck as well to ensure good performance. One is a brass bell that is tied to the bull rope underneath the bull that clatters, and the other is a flank strap. A flank strap is a cotton belt that is tied around the hind flanks of the bull, acting as a slight irritant and encouraging movement. Contrary to myth, the flank strap causes no harm or pain to the animal it is tied around.

How difficult is it to get a perfect score?

Bull riding is an incredibly difficult sport that takes years of training, grit, and determination. Since the score comes from a collaboration between the bull and the cowboy, a cowboy also needs to know how to control the bull they are riding. Just riding and staying on top of even the most difficult of bulls will not get you close to a perfect score. Only the best riders around can dare to spur the meanest bulls on to a perfect performance while managing to complete their ride. For reference, only one perfect score has ever been awarded. Wade Leslie rode the bull Wolfman to a perfect score back in 1991, the first and only cowboy to do so.

What happens if a rider is bucked off?

If a rider is bucked off before eight seconds, their ride is disqualified, and they are not eligible to receive a score. Beside a scoring implication, getting bucked off of a raging bull can be dangerous and it takes a team to help ensure riders stay as safe as possible. When a rider is bucked off or dismounted, barrelmen, bullfighters, and rodeo clowns jump into the arena to distract the bull and guide the rider to safety where they can then receive a score.

Pages Related to How Does Scoring Work In Bull Riding?