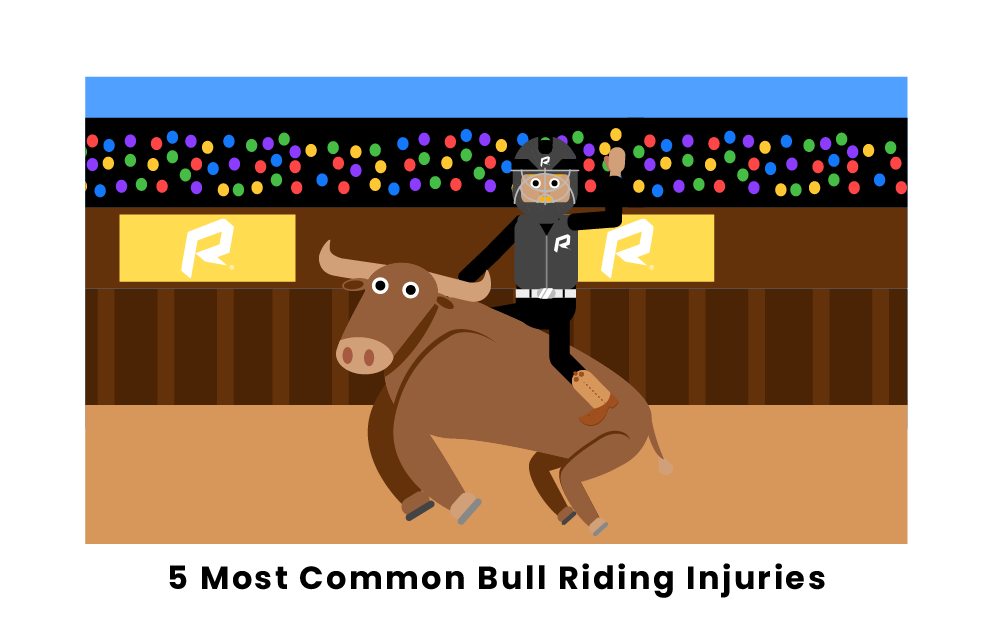 What are the most common bull riding injuries?

Knee ligament injuries are incredibly common in the dangerous world of bull riding. Knee ligament injuries range from Anterior Cruciate Ligament (ACL), Posterior Cruciate Ligament (PCL), Medial Collateral Ligament (MCL), and the Lateral Collateral Ligament (LCL). All of these ligaments surround the knee and connect the shin bone to the thigh bone. These painful injuries are so common because when bull riders are thrown off the bull, the force of when they are thrown off usually make the bull riders land incorrectly and tear those muscles. Additionally, any direct hit from the bull itself at the knee will most likely cause this injury for the rider. This injury requires weeks of rehabilitation.

Sustaining a dislocated shoulder at the rodeo is a common occurrence. A shoulder dislocation is when the arm bone has been ejected from the shoulder socket. This injury is common because the objective of bull riding is to hold on to the harness of the bull for as many seconds as possible, and the shoulder socket is strained when the bull becomes excited and aims to throw the bull rider off its back. The constant jerking of the bull takes a negative effect on the shoulder, and has dislocated riders still mounted on the bull. When this happens, bull riders need to get off the bull and into a safe space in order to seek medical attention.

Ankle sprains are very common in many sports, and bull riding is no exception. An ankle sprain is when the tendons and ligaments that surround the ankle are stretched or torn, causing the ankle to emit a popping sound as well as start to swell and have a dark bruise form in the affected area. Bull riders often sustain ankle sprains when they are thrown off the bull and land awkwardly on the ankle, usually by rolling it. This is a more serious injury than in other sports because bull riders have to run out of the bullpen as fast as possible and climb over the metal fence, and having an ankle sprain makes running much more difficult.

Getting a contusion in the bullpen is almost second nature to bull riders. A contusion is the medically correct terminology for a bruise, and it is when direct pressure is against the skin, causing pain and having the blood capillaries leak, producing the typical black-and-blue. For bull riders, contusions are a part of the sport; many bull riders get contusions from being attacked by the bull and by hitting the metal fence so fast and so hard running away from the excited bull. A contusion is not a very serious injury by nature, but when the injury is caused by a large animal, many bull riders opt for medical attention.

In such a dangerous sport, it is not uncommon for a bull rider to be concussed at the rodeo. A concussion is a serious head injury, causing temporary memory loss, difficulty in concentration, and temporary balance impairments. This injury can be caused by a sudden and direct blow to the head. Every time a bull rider sits on the back of a bull, they are aware of the possible implications of being thrown off the bull and landing on the flat dirt on their head, or even worse, being hit by the bull in the head. Bull riders should seek immediate medical attention if this occurs at the rodeo.