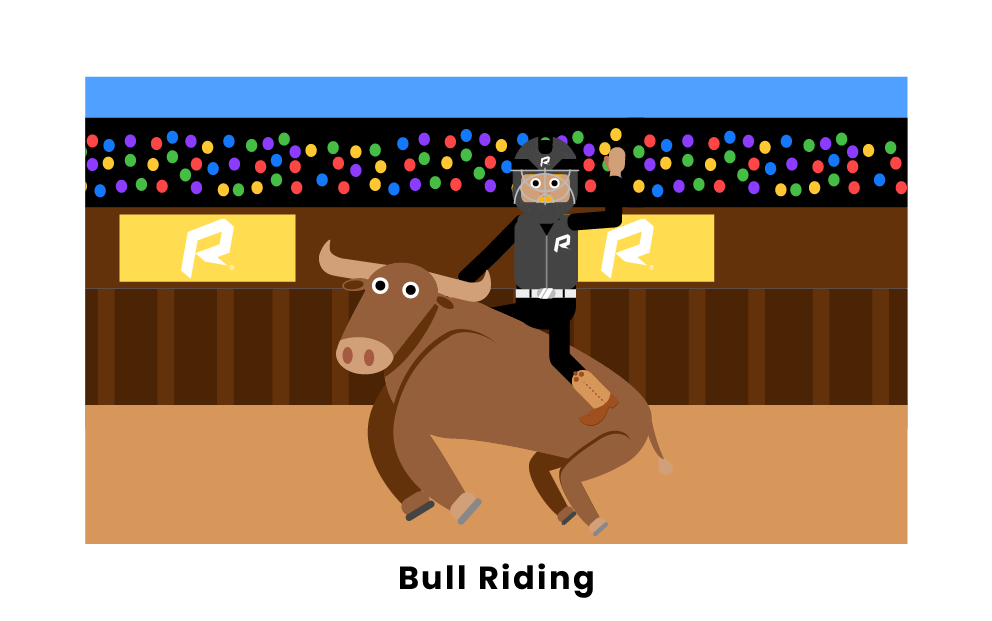 Bull riding is a fan-favorite rodeo event for its promised excitement and danger. In bull riding, athletes, referred to as 'cowboys,' attempt to survive eight seconds aboard the top of a bucking bull. To keep balance, the cowboys are allowed only the use of a single hand to grip a braided rope, known as a 'tail,' strapped around the chest of the bull. Climbing on the back of a 2,000-pound bull is no small feat, and to be successful, cowboys must be as strong mentally as they are physically. There are few other sports that can compare to bull riding in terms of risk, danger, and excitement.

Why are bulls so angry in bull riding?

Just because a bull is bucking does not mean it is necessarily angry. It also does not mean they are in pain contrary to popular myth. It is good to remember that while bulls are domesticated, they are still wild animals. On top of this, bulls intended for the sport have been bred to be more aggressive over generations. Besides the natural reaction of a wild animal to get a rider off of their back, a flank strap is tied around the back of the bull to encourage bucking. While this does work as an irritant to encourage bucking, it causes no physical harm to the bull.

Why do you get a re-ride in bull riding?

A re-ride is granted to a competitor if the judges feel as if the bull that was ridden did not give the rider a strong enough and difficult enough performance compared to the other rides that day. This is important because half of the total points available per ride are derived from judging the bull and it's performance during the ride.

How dangerous is bull riding?

How much money do bull riders make?

Like any sport, the better you do, the more you will make. The sport's biggest stars can pull six to seven figure incomes, but that is only for a select few. In 2018, the average salary for a typical bull rider was only $65,000. This due to bull riding's competitive nature, time commitment, and the fact that most of the money a person can make comes from prize money, meaning you have to do really well every time to get paid every time. For these reasons, many bull riders continue to hold down their regular jobs while riding bulls for a fun way to make a little extra money.