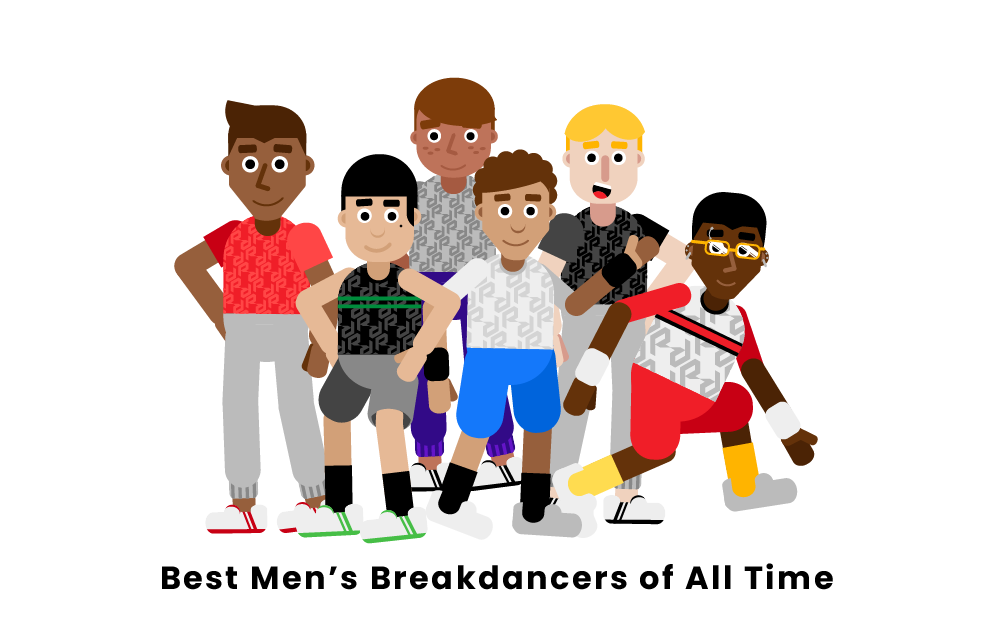 Breakdancing, also known as breaking, has drawn an impressive pool of talent ever since its inception in the 70s. B-boys, young and old, new and seasoned, have brought incredible acrobatics, creativity, and passion to breaking. The top men's breakdancers are unforgettable, from pioneering legends like Hong 10 and Physicx to exciting fresh talent like Issei. Read on to learn about the top six best men’s breakdancers of all time.

Who are the best men’s breakdancers of all time?

Hong 10, or Kim Hong-Yeol, is a South Korean b-boy veteran known for his intricate and extraordinarily creative style. He began breaking in 90s Seoul and soon became an innovative, technically masterful force on the competitive scene. His original move set includes the two-fingers freeze, the halo, and most famously, the Hong 10 freeze, a modified inverted headstand in which he balances on one hand and his head as he lifts his legs horizontally over his body. He won the Red Bull BC One World Championship in 2006 and again in 2013 when the competition was held in his hometown of Seoul. He also won the UK B-Boy Championship in 2004, 2005, and 2006 with his crew. He continues to breakdance worldwide with exceptional agility and stamina.

Physicx is a South Korean b-boy icon who is famous for innovating and popularizing power moves in breakdancing. As a teen, he was inspired by 90s breaking and moved to Seoul to become part of the legendary Rivers crew in 1998. Physicx had an incredible knack for aerial moves and impressive combos, which would evolve into iconic moves like the flagspin, the waistbreaker, and the haloback spin. He made an unforgettable mark in Korea and later the UK, where he won three UK B-Boy Championships with the Rivers from 2002 to 2005 and a solo UK Championship in 2004. He later went on to win the Red Bull World Championship in 2005. He took a break from breaking after an injury in 2009, but today continues to thrill working more on foundation and musicality of his breaking.

Lilou, or Ali Ramdani, is a French b-boy who is beloved for his playful and offbeat style. His performances are full of whimsical twists, and his move set is a balance of classic power moves and new-style flexible moves. He is a former member of the Pockémon crew, but he’s known mostly for his one-of-a-kind solo performances. In 2005 he won the first Red Bull BC One World Championship he entered in a shock upset against Hong 10, one of the most memorable b-boy faceoffs to date. He won the title again in 2009, making him the first-ever b-boy to win it twice. Today he continues to perform worldwide, appearing in everything from local battles to major pop culture events like the Super Bowl.

Menno is a Dutch breakdancer known for his effortless flow and originality. He began breaking at 12 years old in 2001, a key height of b-boy culture. It wasn’t long before he developed a light, effortless style and unique set of original moves that make up most of his performances. He is the only breakdancer to have won the Red Bull BC One World Championship three times, with victories in 2014, 2017, and 2019. He also has an impressive resume of solo battle wins, including the 2007 and 2013 UK B-Boy Championships, the 2019 WDSF World Breaking Championship, and the 2013 and 2015 Battle of the Year and Unbreakable solo championships.

Issei is a young, exciting talent who excites crowds worldwide with high-energy performances and abundant power moves. He started breaking in 2003 at just six years old, inspired by b-boys like Taisuke and Menno. It wasn’t long before he was winning competitions as a teenager, including the 2012 and 2013 Solo B-Boy competition, the 2013 IBE Super Solo Battle competition, and the 2015 Freestyle Session Japan competition. In 2016 he made an exceptional debut at the Red Bull BC One World Finals, where he again took home the championship. At only 24, he continues to be one of the hottest rising stars in the b-boy scene.

Cico, aka Mauro Peruzzi, is a talented Italian b-boy known for his strength and stamina in breaking performances. Nicknamed the Prince of Power, Cico’s performances include lots of air flair with moves like windmills and spins, all of which he performs with impressive speed and dexterity in spite of being larger in a field of mostly lightweight performers. Cico has had great success in solo competitions across Europe, including a number of first-place wins in Germany and Italy. He has given memorable performances in several Red Bull BC One World Championships in the 2000s and served as a judge for the competition in 2008.

Who is the greatest men’s breakdancer of all time?

There is no right answer to who is the best, but many would consider Physicx the most legendary innovator, Menno one of the greatest current performers, and Hong 10 the most accomplished/well-rounded. Breakdancing has seen countless irreplaceably talented b-boys since its inception in the 70s, each with their own subjective appeal to the craft. Some like Lilou emphasize creativity, some like Physicx emphasize power moves, some like Issei focus on musicality, and others like Hong 10 and Physicx have been longtime legendary innovators.

What men’s breakdancer has the most Red Bull BC One wins?

What does “BBoy” mean?

A b-boy or b-girl is the breakdancing community’s preferred term for a breakdancer or breaker. The name arose from 70s hip hop when dancers would wait for the energizing break on the track to take to the floor and perform. These dancers became known as break-girls and break-boys, which was shortened to b-boys and b-girls as the style grew more popular. B-boys can more broadly refer to people who follow hip-hop culture, but most understand it as a breaker.

Pages Related to Top 6 Best Men's Breakdancers of All Time