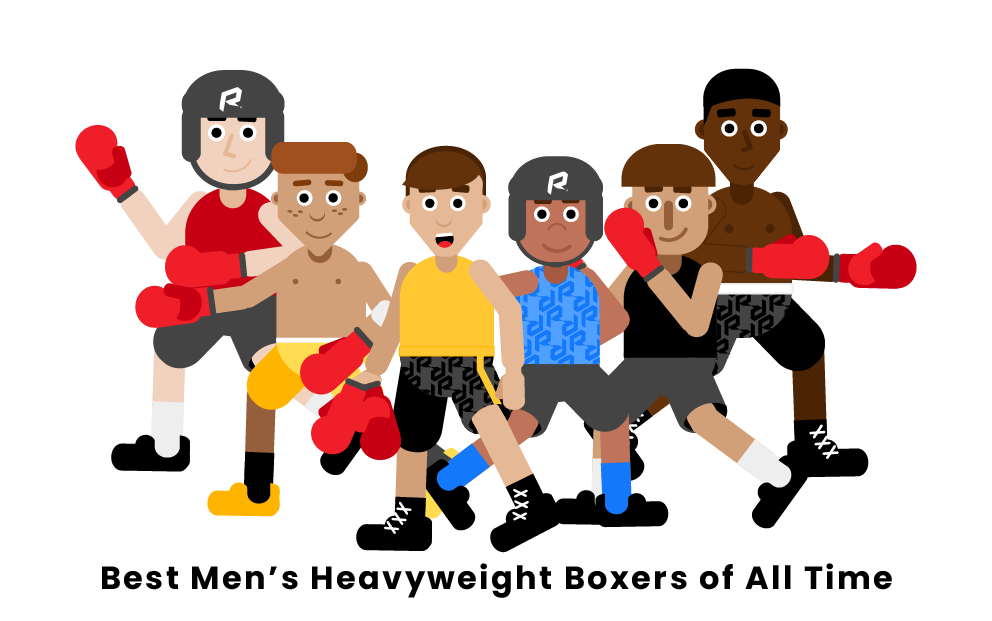 Who are the best men’s heavyweight boxers of all time?

Muhammad Ali was born Cassius Marcellus Clay, Jr. in 1942. He was the first boxer to win the heavyweight championship three separate times; he even defended his title 19 times. Ali took up boxing when he was 12 years old. In 1964, he challenged Sonny Liston for the world heavyweight championship; he was seen as the underdog, but he ended up beating Liston and taking his title. Two days later, Ali announced that he had accepted the Islam teachings and officially took the name Muhammad Ali. After Ali refused to fight in the Vietnam War, his championship was taken away, and he was criminally indicted and sentenced to five years in prison. Ali was a civil rights activist with the message of Black pride and Black resistance. He retired from boxing at the age of 39. Sadly, Ali was diagnosed with Parkinson's disease at 42 and passed away in 2016.

Larry Holmes, also known as the Easton Assassin, was best known for his defensive tactics. He was the heavyweight champion in the late 1970s and early 1980s. When he was younger, he was a street fighter before getting into organized boxing in Easton, Pennsylvania, and turning professional at the age of 24. He was Muhammad Ali and Joe Frazier’s sparring partner and found it hard to establish himself as an elite boxer with them in the arena. In 1978, he won the heavyweight crown in the World Boxing Council and defended his title 17 times.

Joe Frazier was the heavyweight champion from 1970 to early 1973 and fought in the “Thrilla in Manila” in 1975. The Thrilla in Manila was a highly-anticipated 14-round match against Muhammad Ali in the Philippines; Ali won by TKO. Frazier quit school at the age of 13 and moved to New York City at 15. After dreaming of becoming a professional boxer all his life, Frazier entered the ring in 1961. Prior to this, Frazier worked at a slaughterhouse and would often punch slabs of beef; this inspired scenes in the film “Rocky”. He turned pro in 1965 and was crowned the heavyweight champion in 1968.

Evander Holyfield was introduced to boxing by Carter Morgan when he joined the Boys and Girls Club at eight years old. He became the National Golden Gloves Champion in 1984 and turned professional at the age of 21. Holyfield won his first world championship in 1986. He moved to the heavyweight division in 1988 and claimed the WBA, WBC, and IBF heavyweight titles in 1990. He was forced to retire after being diagnosed with a heart condition, but he returned to boxing a year later. He fought Mike Tyson in what Ring Magazine named the fight of the year and upset of the year. He retired for good in 2014 after becoming a five-time heavyweight champion of the world.

George Foreman was born into an impoverished family and became a mugger at the age of 15 in Houston’s Fifth Ward. Lyndon B. Johnson Job Corps saved him, and he went to California and met a Job Corps counselor, Doc Broaddus, who encouraged him to take up boxing. He quickly established an impressive amateur record and turned professional in 1969. Foreman won the world heavyweight championship in 1973. He successfully defended his title twice, and he even beat Jose Roman in only 50 seconds, which was the shortest heavyweight match at the time. “The Rumble in the Jungle” was one of the most famous fights in the history of boxing, and it was between Foreman and Muhammad Ali in 1974.

Rocky Marciano was born Rocco Francis Marchegiano in 1923. He took up boxing after he was drafted to the Army in 1943; he fought as an amateur after he was discharged. He turned professional in 1948. His trademark technique, which highlighted a crushing overhand right, was taught to him by trainer Charley Goldman. In 1951, Marciano knocked out his hero, Joe Louis. In 1952, he won the world heavyweight title and defended this title six times. Marciano retired from boxing in 1956 at the age of 31.

Who is the greatest men’s heavyweight boxer of all time?

The greatest men’s heavyweight boxer of all time is Muhammad Ali. He is not only the most recognizable name in men’s heavyweight boxing, but also was a three-time heavyweight champion of the world. Ali is also nicknamed “The Greatest.” During his impressive career, he fought 61 times, out of which he won 56.

What men’s heavyweight boxer has won the most title bouts all time?

Joe Louis has won 27 heavyweight title bouts, which is the most of all time. He also holds the world record for most title defenses consecutively in his division and in boxing history with 26 title defenses.

What men’s heavyweight boxer has the most knockouts all time?