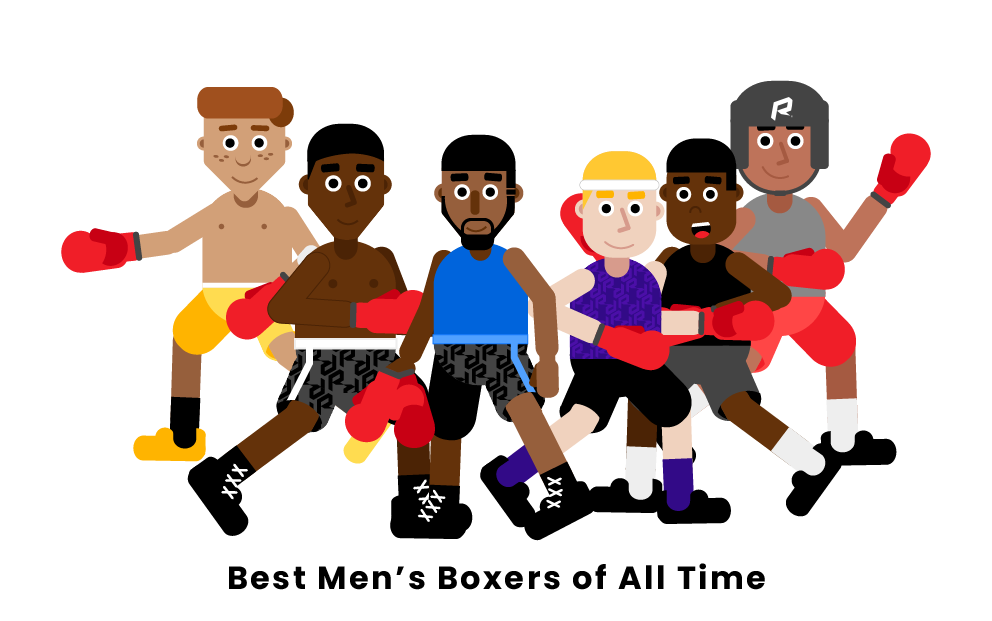 Boxing is one of the oldest sports in world history. Boxing’s origins date all the way back to 300 BC in Egypt, and it was adapted into the Olympics in the late 7th century BC. The sport grew over time to become a pipeline of mainstream talent that won over the hearts of people not just in the U.S. but around the world. Read on to learn about the top six best men’s boxers of all time.

Who are the best men’s boxers of all time?

Muhammad Ali is widely regarded as the greatest boxer of all time due to his high-level skill and one-of-a-kind personality. He was born on January 17th, 1942, in Louisville, Kentucky, with the birth name Cassius Marcellus Clay Jr. Ali first picked up boxing at the age of 12 after his bike was stolen, and he told the police officer responding to the incident, Joe Smith, he wanted to beat up the thief. Smith then began training Ali in the sport, and the rest was history. He had his first amateur bout in 1954 and won a Golden Gloves title in the light heavyweight division two years later in 1956. By the time Ali’s career was over, he won Olympic gold and three heavyweight titles, beating some of the best names in boxing history, including Joe Frazier and George Foreman.

Ali also had a significant impact on social justice, specifically during the Vietnam War when he was drafted and refused to fight in the war due to his newfound Muslim faith after he converted in 1964 and ultimately went to jail for not participating. After being diagnosed with Parkinson’s, Ali devoted the remainder of his life to philanthropy projects and even got a presidential medal of freedom for his work.

Sugar Ray Robinson was born in Detroit, Michigan, on May 3rd, 1921, by the original birth name Walker Smith Jr. Before his professional career began in 1939 after winning his first Golden Gloves award at Featherweight, he won 89 amateur fights without a single loss using the name Ray Robinson. A year after he went pro, Robinson won his second Golden Gloves title lightweight and then went on a 40 fight win streak. His first professional loss came at the hands of Jake LaMotta in their first of six fights against each other and ended up being one of the greatest rivalries in middleweight history. On December 20th, 1946, Robinson captured his first and only welterweight title beating Tommy Bell via 15 round decision.

Robinson gave up his welterweight title six years later, in 1951, after winning his first middleweight title, beating Jake LaMotta by knockout in the 13th round. After dropping the belt later in 1951 to Randy Turpin, he regained it, beating Turpin before the end of the year. A year later, he tried and failed to capture the light heavyweight championship against Joe Mixon and then proceeded to retire out of nowhere.

However, his retirement was short-lived, and Robinson returned to the ring two years later in 1954. He ended up winning four more middleweight championships after his comeback and ended his career with 201 fights, and retired 11 years later in 1965.

Floyd Mayweather Jr. was born February 24th, 1977, in Grand Rapids, Michigan. His father, Floyd Mayweather Sr., had a successful career as a professional boxer in the welterweight division along with his two uncles, Roger and Jeff, who were both world champions in their respective divisions. Floyd started his career in the amateur circuit, where he earned his popular nickname ‘Pretty Boy’ because of the little amount of damage he would take during his fights. He won three Golden Gloves titles in 1993,1994, and 1996. His amateur career ended on a controversial loss in the 1996 Olympic Games to Serafim Todorov in the semi-finals, however, he still earned a bronze medal. Mayweather had his first pro boxing match in 1996, beating Roberto Apodaca via second-round knockout. Two years later, in 1998, Mayweather won the WBC junior lightweight title on October 3rd, 1998, beating veteran titleholder Genaro Hernandez in the eighth round via knockout. Mayweather then went on to win three more championships, all at different weight classes, never losing a bout in the process.

However, he didn't generate any real mainstream attention until he beat fellow American Oscar De La Hoya for the super welterweight title. In June 2008, before a scheduled rematch with De La Hoya, Mayweather announced his retirement, which most analysts assumed would be temporary. Mayweather returned to the ring 18 months later in 2009 to fight Juan Manuel Márquez and beat him via a 12-round decision in a hard-fought battle. Mayweather went on to finish his career by beating any competition thrown at him and generated millions of dollars from amateur fights with MMA fighter Connor McGregor and mainstream influencer Logan Paul.

Michael Gerald Tyson was born on June 30th, 1966, in Brooklyn, New York. Tyson was a member of various New York City street gangs from a young age and was sent to reform school in 1978. At reform school, Tyson developed a relationship with social worker Bobby Stewart, who introduced Tyson to the sport. Stewart introduced Tyson to legendary boxing coach Cus D'Amato, who later became his legal guardian. Tyson began his career as an amateur compiling a 24-3 record and turned pro in 1985.

One year after turning pro, Tyson became the youngest WBO world heavyweight champion in boxing history, defeating Trevor Berbick via a second-round knockout. A year later, he acquired the WBA belt, defeating James Smith, and then beat Tony Tucker for the IBF Championship, becoming universally recognized as champion holding all three sanctioning organizations championships. After D’Amato and trainer Jimmy Jacobs died, Tyson signed with controversial promoter Don King. Tyson defended his championships ten consecutive times until losing to James “Buster” Douglas in one of the biggest upsets in the history of the sport. Although Tyson came back from the upset, winning four straight fights, he was arrested and sent to prison for three years. Tyson went on to return to the ring after serving his time and even regained two of his championships in 1996. However, the remaining eight years of his career were plagued by personal demons and more trouble with the law. Tyson’s final pro fight was a 49-second knockout win in 2003.

Joseph Louis Barrow was born on May 13th, 1914, in Lafayette, Alabama. Louis grew up as a part of a sharecropper family and began boxing after his family moved to Detroit. He won the U.S. Amateur Athletic Union Title in 1934 and was also a Gold Glove titleholder. Louis turned pro in  1934 after his Athletic Union Title win. His first professional fight was on July 4th, 1934, and his first loss as a professional was to Max Schmeling. Louis won his first world title in 1938, defeating then heavyweight champion James Braddock. After his World Championship win Louis faced the only opponent he lost to as a professional Schmeling in a fight that was billed by the media as the fight between Nazism and Democracy, although Schmeling himself was not a Nazi.

When Louis knocked out Schmeling in the first round, he turned into an American hero and never lost a step from there. He was at his peak from 1939 to 1942. From December 1941 through June 1942, he successfully defended his championship seven times. Louis then enlisted in the U.S army in 1942, serving in a segregated unit with Jackie Robinson, the first African American baseball player. When he finished his time in the service, Louis was less active, and in 1949 he retired as world champion. Although Louis earned over $5 million over the course of his career, he gave nearly all of it away. Due to owed taxes and penalties from the IRS, Louis was forced to return to the ring to pay off his debts. He fought Ezzard Charles for the heavyweight championship in 1950 but lost in a 15-round decision. In the last fight of his career, Louis fought Rocky Marciano, losing via knockout in the eighth round.

Roberto Duran was born on June 16th, 1951, in Guararé, Panama. Duran began his professional career at the age of 16 in 1967 and went on to win the first 32 matches of his career, 26 by knockout. His first loss came in 1972, getting defeated by Esteban De Jesús in a ten-round non-title decision. Earlier that year, Duran won the lightweight title from Ken Buchanan by knockout in the 13th round. Duran then went on a five-year winning streak from 1973 to 1978, defending his title successfully 12 times in a row along with winning all his non-title fights as well.

After moving up to the welterweight division in 1980, Duran beat then champion Sugar Ray Leonard in a 15-round decision. But in their second fight that same year, Duran lost to Leonard via 8th round knockout, although Duran wasn't technically knocked out. Instead, Duran said “no mas” to the referee, ending the fight in the 8th round. He returned to the ring in 1981 and captured the WBO junior middleweight championship in 1983, and won the WBC middleweight championship in 1989. He continued boxing into his 50s’ and retired in 2003 with a 103-16 record.

Who is the greatest men’s boxer of all time?

The greatest men’s boxer of all time is Muhammad Ali. He won a total of 56 matches over the course of his career, with 37 of those coming by knockout. Ali took down some of the greatest fighters in history, such as Sonny Liston, Joe Frazier, and George Foreman. Due to his illustrious career, Ali was named into the International Boxing Hall of Fame in 1990 and named the Sportsman of the 20th Century by Sports Illustrated.

What men’s boxer has the most wins all time?

Len Wickwar has the record for the most wins and most bouts in boxing history, totaling 339 wins out of his 467 fights. Wickwar obtained this record during a period in the history of the sport where fighters would fight multiple times in a month. Only having a 19-year career, Wickwar was constantly in the ring competing and holds a record that will last lifetimes.

What men’s boxer has the most knockouts all time?

Billy Bird holds the record of most knockouts of all time with 138. He fought 356 fights but was rumored to have fought even more during his career, which were not professional matches. The boxer with the second most knockouts in the history of the sport is Archie Moore, with 132 to his name.

Pages Related to Top 6 Best Men's Boxers of All Time