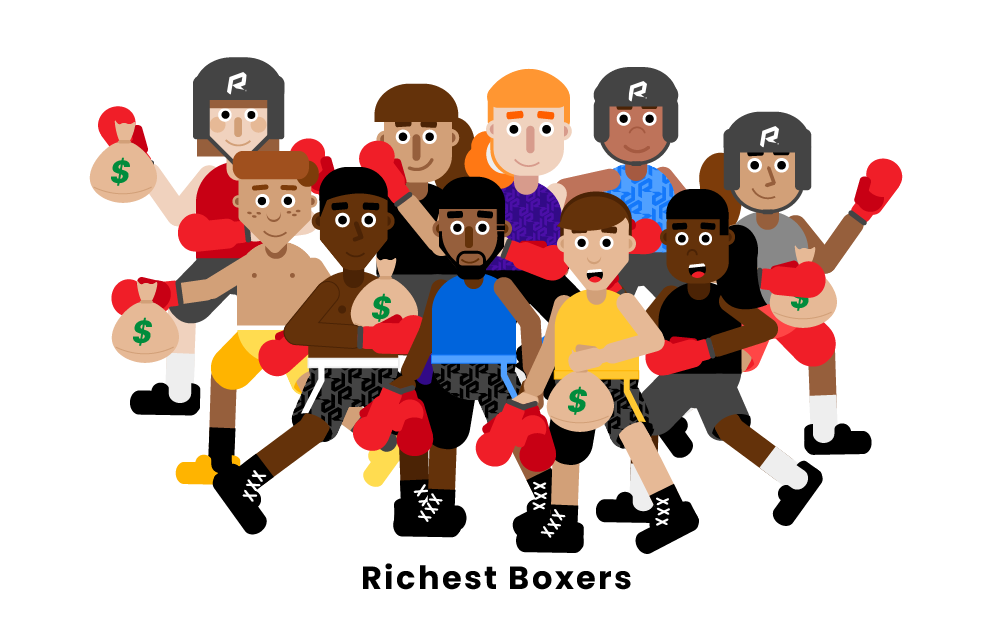 Who are the richest boxers?

Floyd Mayweather Jr, also known as Floyd “Money” Mayweather’s exact net worth isn’t known, but most estimate that it is above $500 million. Floyd Mayweather’s brand involves flaunting his wealth. Many believe he does this to make himself appear as a villain, so people will tune into his fights. The best example of this was his fight vs UFC star Connor Mcgregor. It was an extremely promoted fight, and it is rumored to have made Mayweather over $250 million for the fight (the most ever for one fighter). On top of his wealth, he also owns a perfect 50-0 record and is regarded as possibly the most technically sound boxer ever.

George Foreman is considered to be one of the best heavyweight fighters ever, with a net worth of $300 million. He competed from 1969 to 1977 and 1987 to 1997. However, he fought in the era before fights generated huge amounts of money. Even his most famous bout with Muhammud Ali, “The Rumble in the Jungle,” only netted him $5 million. However, a large portion of Foreman’s net worth comes from sales of his famous George Foreman grill. George Foreman became the face of the endorsement, and while the deal included no upfront money, Foreman got 45% of the product's profits. Once the grill became a hit, Foreman made $11 million for TV appearances and $137 million in cash and stock as part of a buyout.

Oscar De La Hoya, also known as “Golden Boy,” was a professional boxer who competed from 1992 to 2008, with a net worth of roughly $200 million. Oscar De La Hoya won multiple world titles in six different weight classes, making him one of the greatest boxers of all time. De La Hoya is now also one of the biggest boxing promoters, having created his company Golden Boy Productions. He was one of the biggest pay-per-view sellers in history before Mayweather, and this is how he made most of his money. It has also been rumored that De La Hoya has also been trying to make a comeback to the ring.

Saul Canelo Alvarez is an active Middleweight Mexican boxer with an estimated net worth of $140 million. Most of Canelo’s money has come from highly-anticipated fights, including big bouts against Floyd Mayweather and Gennady Golovkin. Moreover, he is currently in the middle of an 11-fight deal with DAZN and Golden Boy Productions worth $365 million. This includes making $35 million per fight for each of his upcoming fights on his contract. Alvarez is far from done in his career, and so he will most likely move up on this list by the time his career is done.

Lennox Lewis was a heavyweight boxer from the UK who competed from 1989 to 2003 and has a net worth of $140 million. He is a three-time heavyweight champion who made most of his money from fights. His biggest fight was against Mike Tyson, and it made him the most money of any of his fights during his career. Lewis was a three-time heavyweight champ and represented Canada as an ameatur boxer in the 1988 Summer Olympics, when he won gold. Unlike some of his contemporaries like Mike Tyson, Lewis was careful with his money and still has it today.

Sugar Ray Leonard is often regarded as one of the greatest boxers ever, with a net worth of around $120 million. His career spanned from 1977 to 1997. In his career, Leonard won titles in five different weight classes, which is extremely rare in boxing. Leonard has also contributed to his net worth from many different avenues besides boxing. He has commentated for different networks, acted, written an autobiography, been a motivational speaker, and made smart real estate purchases. Leonard also has had endorsement deals with companies such as Coca-Cola, Ford, and EA Sports.

Wladimir Klitschko is one of the best heavyweight fighters ever, with a net worth of $90 million. Wladimir Klitschko is the brother of Vitali Klitschko, another talented boxer from Ukraine. He has the record for the longest reigning IBF, WBO, and IBO Heavyweight Champion with 15 straight wins. He earned himself the nickname “Dr Steel Hammer” with 53 of his 64 victories coming by knockout. In 2015, Klitscho lost to Tyson Fury ending his 15 win streak and losing his belts which he hasn’t recovered since. Klitscho made most of his money from fighting, and hasn’t done much outside of boxing to increase his income.

Vitali Klitschko is a heavyweight boxer from Ukraine, with an estimated net worth of $80 million. He is also the brother of Wladimir Klitschko. Vitali is also known as “Dr. Ironfist” for the powerful punches he throws. Vitali originally started in kickboxing, and then transitioned to boxing when he won the world military games in Italy. He then rose through the ranks in boxing, eventually becoming a heavyweight champion like his brother. Vitali also has had a solid political career back in his home country of Ukraine, becoming mayor of Kiev in 2014 as well as heading the Kiev City State Administration.

Anthony Joshua is a current heavyweight fighter who has a net worth of over $80 million. Anthony Joshua started out as an amateur fighter, winning a gold medal at the 2012 London Olympics for his home country England. Joshua has won multiple heavyweight belts, and recently had a huge fight in Saudi Arabia in which he was guaranteed $60 million. Joshua’s career is far from over, and he is most likely to climb up this list in future years as he has more big fights and endorsements, especially if he has future fights to try to unite all of the heavyweight belts.

At the time of his death, Muhammad Ali had an estimated net worth of $50 million. He is widely regarded as the best heavyweight boxer of all time. Ali finished his career with a record of 56 wins and only five losses, with 37 of the wins coming by knockout. He fought many highly-ranked fighters during his career, such as Joe Frazier and George Foreman.

Marvin Hagler, known to many as “Marvelous Marvin Hagler,” carried a net worth of approximately $45 million prior to his passing in 2021. Upon becoming a professional boxer, he came out victorious in his first 26 fights. These 26 consecutive victories featured 19 knockouts. This was a common theme throughout his career, as Hagler managed 52 knockouts in his 62 professional wins. Overall, these 52 knockouts are the record for knockout percentage amongst middleweight boxers (78%). He boasted an exceptional track record in title bouts, sporting the sixth-longest championship reign in the history of middleweight boxing history.

Bernard Hopkins is a retired middleweight and lightweight champion boxer with a net worth of $40 million. Hopkins is revered for his success in multiple different weight classes, having held the middleweight title from 2001 to 2005 and the lightweight title from 2011 to 2012. He is widely deemed one of the greatest boxers of the modern era and built a good deal of his wealth from his boxing prowess.

Are there any boxers that have lost their money?

While boxing, especially in recent years, earns fighters lots of money, some boxers still have managed to lose all of their career earnings from the sport. This includes some of the greatest boxers of all time, like Joe Louis, Leon Spinks, and Evander Holyfield. However, the man who lost the most money was Mike Tyson. Through overspending and bad investments, he lost the $300-400 million he earned in the ring, showing that even one of the greatest boxers ever can lose it all.

Who are some of the current boxers that may join the list of richest boxers?

Boxing today, while maybe not as popular as it was a couple of decades ago, still has many great fighters that could someday join the list of the richest boxers ever. Two boxers that are likely to become among the richest in the history of the sport are Tyson Fury and Deontay Wilder. Both have already fought each other twice and are two of the best heavyweights currently fighting. On top of this, fighters like Vasyl Lomachenko and Gennady Golovkin, who have fought Canelo Alvarez twice, could also break into the top ten.

How do fighters earn their money?

Boxers typically make the majority of their career earnings in a few big fights. These fights are usually referred to as prize fights, in which two of the top contenders face-off, usually with a belt or championship on the line. However, early on in many boxers' careers, they get small amounts of money. For boxers that aren’t as talented, usually, they will never really get that big money fight, and if they do, it's typically a one-off unless they win.

Will there ever be a better promoter than Floyd Mayweather?

Unless another boxer can combine all-time skill with being one of the greatest sports villains, there may never be a greater self-promoter than Floyd “Money” Mayweather. One of the most impressive parts of Floyd Mayweather’s career is his ability to garner interest in his fights. The best example of this was his fight against Connor Mcgregor. The hype for this fight was intense, even though most analysts and fans thought there was little to no chance of Mcgregor winning. Yet, the fight still brought in almost $600 million, and Floyd got $250 million. This is why Floyd Mayweather is by far the most wealthy boxer to date. No matter the opponent, people wanted to watch his fights to see him lose.