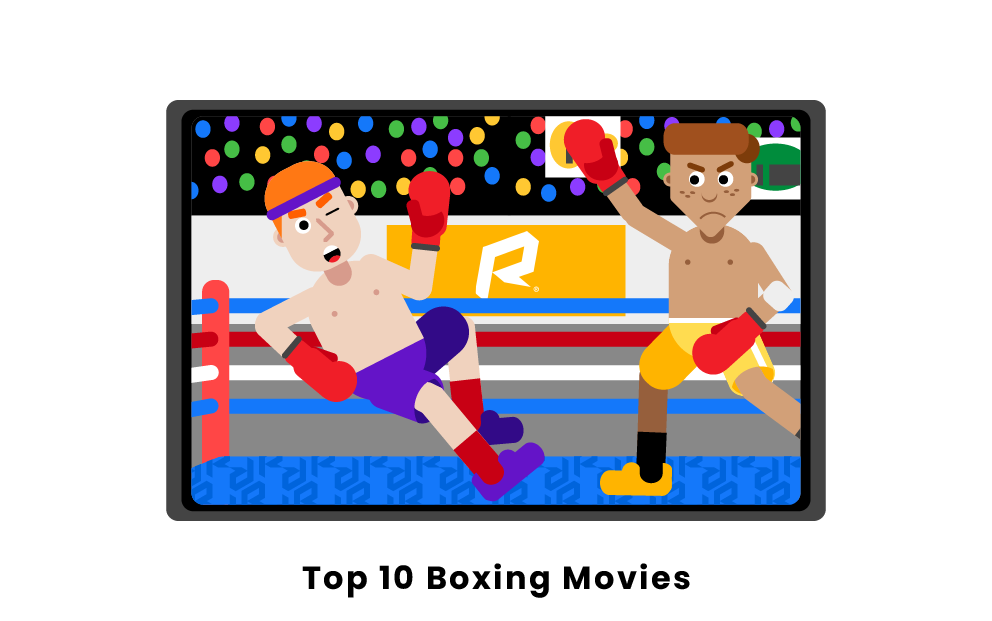 What are the most popular boxing movies?

The movie Rocky follows small time boxer Rocky Balboa (Sylvester Stallone) in his quest to hit the big time, while balancing the trials and tribulations of mob life and complicated love affairs. In the beginning, Balboa spends much of his time collecting debts for the Philly mob, but this lifestyle quickly becomes unfulfilling especially when his love life falters and his boxing career stalls. Luckily, everything changes when Balboa is given a chance of a lifetime: a world heavyweight bout against reigning champion Apollo Creed (Carl Weathers). Although most people do not give Balboa a chance to compete with Creed because of his amateur status, Balboa is more determined than ever to compete in what could be his only real chance to make a name for himself. Rocky is undoubtedly the most famous boxing movie of its generation because of its classic rags to riches storyline, unprecedented starpower, and inspirational training scenes. In fact, fans loved Rocky so much so that a total of 7 sequels came out in the coming decades.

The next film on this list is none other than the Scorcese classic Raging Bull. This movie follows self-destructive middleweight boxer Jake LaMotta (Robert DeNiro) in his quest for success both in the ring and within his marriage. Unlike a few other movies on this list, Raging Bull is not a feel good underdog story. Instead, it tells a powerful story of violence and deep rooted jealousy in the life of a man who once thought he had it all. In addition, it details how the gritty, passionate drive that goes along with being a professional boxer can just as easily lead to the downfall of all the good things that come with it. Within the film, Jake faces his explosive temper in scenes of crushing domestic violence and bitter sexual frustration with his once-loving wife Vickie LaMotta (Cathy Moriarty).

Overall, Raging Bull is much more a story about the frustration and insecurity that men build up within themselves as opposed to anything that deals with boxing itself. Despite its soul crushing nature, it is considered to be one of Scorcese's most complete films, cementing itself as one of the top boxing movies of all time.

Creed details the journey of Adonis Johnson (Michael B. Jordan), the son of heavyweight legend Apollo Creed, who has emerged out of the shadows in an attempt to follow in his father's footsteps. This film continues the story of the Rocky franchise, while adding a distinct element of comradery between families who were once viewed as enemies in the ring. Specifically, it aligns Creed with a retired Rocky Balboa as the two train together to try to reinvigorate the Creed family name. Balboa serves as Creed's boxing mentor throughout the story, as both have an eye on achieving greatness. However, Creed battles much more than opponents in the ring in the form of trying personal struggles, all of which grow more painful as the story continues.

Many fans of the Rocky franchise were skeptical of this type of spinoff; however, Creed was met with much cinematic positivity, led by the exquisite performances of Michael B. Jordan and Tessa Thompson.

Number four on this list of top boxing movies is the John Huston film Fat City. Fat City looks at the story of washed up boxer Billy Tully (Stacey Keach) as he befriends young boxer Ernie Munger (Jeff Bridges). Both Billy and Ernie face plenty of issues in and out of the ring with Billy fighting ravaging alcoholism and Ernie battling a perilous marriage that was not meant to be. The two confide in each other through the sport of boxing, helping each other through their separate issues along the way. Although Fat City is not as popular as the Rocky franchise, it certainly does a good job of illustrating the problems of the common fighter as opposed to the rich and famous boxer, all of which is enhanced by stellar acting and beautifully written screenplay.

The Clint Eastwood film Million Dollar Baby tells the story of old boxing trainer Frankie Dunn (Clint Eastwood) and his unusual relationship with Maggie Fitzgerald (Hilary Swank), an amateur boxer determined to fight with the best. At first, Dunn is reluctant to engage with a woman like Maggie, as it reminds him of his estranged daughter far too much. Eventually, Dunn warms around to the idea of training Fitzgerald, guiding her through the rugged world of women's boxing. Dunn and Fitzgerald form a special bond throughout the story, helping fill the void that Dunn's daughter left behind years ago. Dunn eventually scores Fitzgerald a million dollar fight with a vicious fighter in a match that will undoubtedly make or break the boxer's career.

Body and Soul tells the classic tale of a boxer who is faced with a multitude of moral dilemmas all in an effort to earn the title of "World's Greatest Boxer." Specifically, it follows Charley Davis (John Garfield) as he rises up the boxing ranks, while becoming increasingly involved with corrupt individuals along the way. In doing so, Davis's conscience is challenged and he is forced to make tough decisions about all aspects of his life. Despite having a somewhat melodic plot by today's standards, Body and Soul is looked at by many as the greatest boxing film ever created because of its revolutionary cinematics and intense acting.

The Ron Howard film Cinderella Man is next on the list of best boxing movies of all time. In this drama based in the 1930s, former boxer James Braddock (Russel Crowe) is dragged back into the ring much to the dismay of his wife Mae (Renee Zellwegger) after his past manager offers him one last spot. In a feat of glory, Braddock wins the bout, leading him down a road his wife thought he left behind. Blinded by glory, Braddock has his sights on Champion Max Baer (Craig Bierko), a deadly fighter who knows no bounds.

Cinderella Man is a rare type of boxing film in that the protagonist actually defeats his demons and realizes what is right before it is too late. Overall, The exceptional screenplay and unique acting styles found in Cinderella Man are what make the movie so unforgettable.

Despite the fact that many seemed underwhelmed by this story of Muhammed Ali (as there were so many to choose from), Ali is still considered by many to be the greatest true boxing movie of all time. This Michael Mann adaptation follows "The Great One", capturing the divisive Muhammed Ali (Will Smith) in a variety of forms. From his stark criticism of America to his remarkable determination, this film is about much more than sport. Rather, it depicts the life of a man who believed in something with his whole heart, fighting everyday both figuratively and literally to make it a reality.

The Fighter is a true story about Micky Ward and Dicky Eklund, half-brothers who rose up the boxing ranks together in the 1980s. Now past his prime, Dicky Eklund (Chrsitian Bale) trains Micky (Mark Wahlburg), who hopes to supersede his brother's success and make a name for himself. However, the two face unprecedented issues when Dicky becomes addicted to crack, splitting the two apart in ways they did not see coming. Eventually, Micky leaves his crazy family, hoping to achieve greatness in his own way. Wahlburg excels in his role as Micky Ward, citing his role as his most passionate ever. Because of its acting and real-world character, it is no surprise that both critics and fans view The Fighter as one of the top boxing films of all time.

Filmed in 1931, The Champ is viewed by many as the first truly great boxing film as it follows the life of old boxer Champ (Wallace Beery) in his quest to remain relevant while struggling with alcohol and gambling addictions. Despite his obvious pitfalls, Champ's young son Dink (Jackie Cooper) sees the good in him from the very beginning as most kids tend to do. Throughout the tender story, Champ struggles to keep Dink's best interests in mind, despite loving him dearly.

Overall, The Champ delivers a hard hitting, yet heartfelt message that still rings true to this day. Because the film is so beyond its years in terms of cinematic structure, it truly deserves a spot in this list of top 10 boxing movies of all time. In fact, there was even a remake of this King Vidor classic that was released in 1979 as a tribute to the film's long standing tradition.